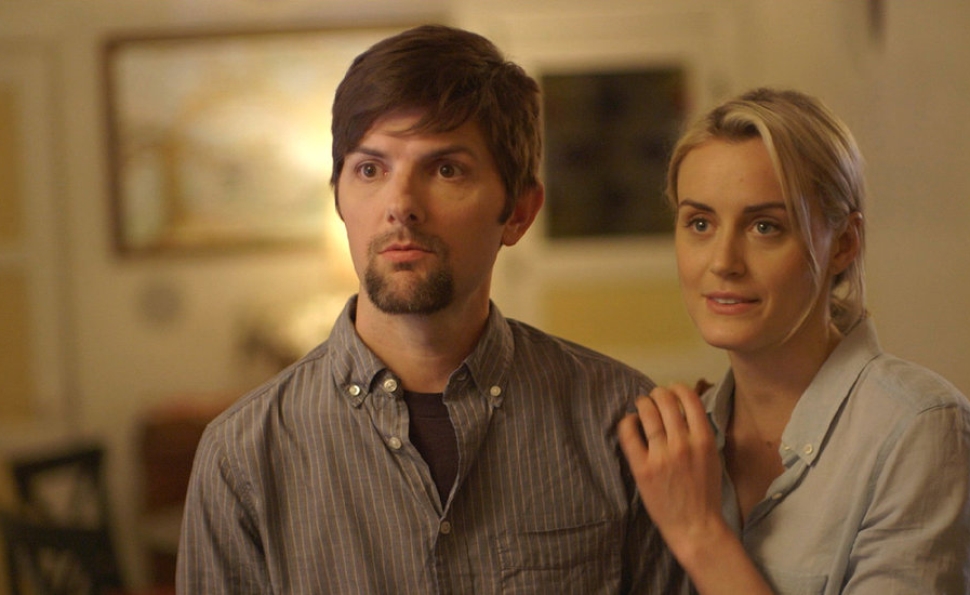 Parties that spin out of control have long been a reliable source of comedy, from The Party to Bachelor Party to House Party. (The Hangover series might also count, though technically those films chronicle the aftermath of a largely unseen party.) How small could such a bash get and still feel dangerous? The Overnight, an uproarious envelope-pusher that premièred at Sundance 2015, manages to wreak havoc with just two couples, as an intimate dinner party—initially conceived as a playdate for their kids—metamorphoses from friendly evening chit-chat into bizarre wee-hours bacchanalia. Written and directed by Patrick Brice (whose previous film, Creep, starring himself and Mark Duplass, makes its VOD debut June 23), it’s an unusual but surprisingly effective mix of outrageousness and sincerity, in which the four anxious revelers somehow function both as broad caricatures and as real, complex human beings.

Things start out innocently enough. Having just moved to Los Angeles, where they don’t know anybody, Alex (Adam Scott) and Emily (Taylor Schilling) are slightly taken aback, but pleased, when they’re greeted at the park by Kurt (Jason Schwartzman), the father of a toddler who’s playing with their own young son. Kurt seems a tad intense (and is dressed like an Amish farmer for some reason), but he’s exceedingly nice, and the couple happily accepts an invitation to have dinner with him and his equally pleasant, French-born wife, Charlotte (Judith Godrèche), at their home. Once their respective kids have been put to bed, however, the atmosphere takes a none-too-subtle turn, beginning with Charlotte casually putting a hand on Alex’s knee. Before long, Kurt is persuading Alex to pose for one of his paintings—all of which feature gigantic close-ups of puckered anuses—while Charlotte, during an ostensible booze run, demonstrates to Emily her penchant for giving happy endings at a nearby massage parlor. When Kurt suggests that they all go skinny-dipping in the backyard pool, Alex and Emily recognize that they’ve reached a potential point of no return. Do they really want to do this? And if they don’t, does that—the horror!—make them uncool?

Given how over-the-top goofy The Overnight’s comic setpieces are, it’s remarkable how seriously the film takes its characters’ anxieties. Alex, for example, is reluctant to get naked in the pool because he has an unusually small penis, and his considerable shame only intensifies when he sees that Kurt is hung like a horse. Brice milks this (so to speak) for big laughs in a nude dance sequence—wearing convincing prosthetic dicks, Schwartzman and Scott are truly the genital equivalent of Arnold Schwarzenegger starring opposite Danny DeVito—but he also treats Alex’s embarrassment with genuine empathy, briefly turning the film into a serious, affecting drama about deep-seated feelings of inadequacy. Likewise, while Kurt and Charlotte’s repeated efforts to get a foursome going are often hilarious, Alex and Emily’s attempt to figure out their comfort level, then compare that to the self-image they want to project, is utterly real and emotionally precise. The tricky balance between those dueling tones isn’t always perfectly achieved, but all four actors commit themselves fully in both directions, and the result is bolder than any raunchy comedy in recent memory. It isn’t easy to inspire belly laughs and a lump in the throat.