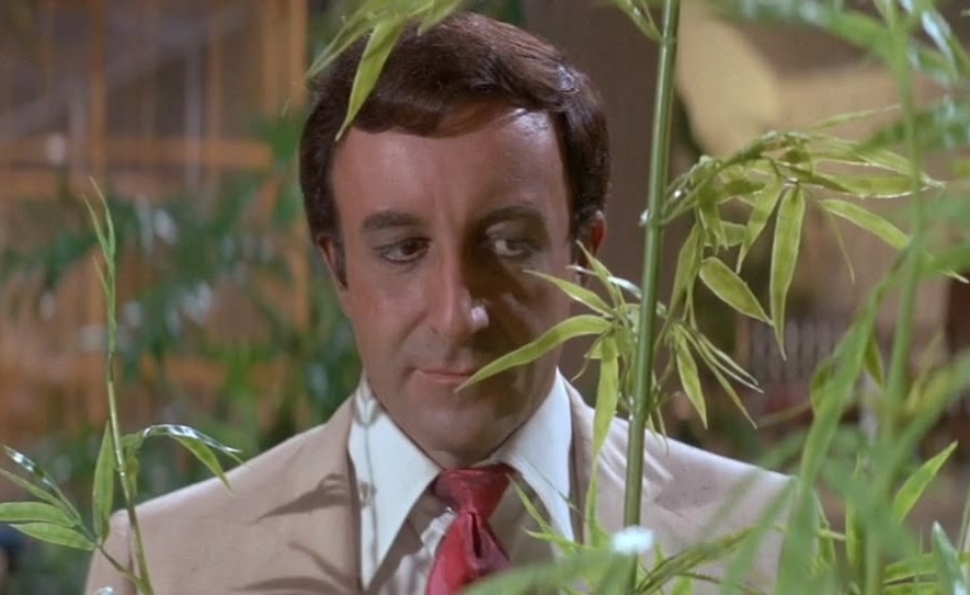 Perhaps the best place to start with Blake Edwards’ 1968 comedy The Party is by talking about the elephant in the room: Late in the movie, when the titular party has raged out of control, there’s an adorable baby elephant in the room, handled by a band of young hippies and covered from trunk to tail in painted political slogans.

Then there’s the other elephant in the room: Peter Sellers in brownface as Hrundi V. Bakshi, a bumbling New Delhi actor who attends a bourgeois Hollywood dinner party and becomes an unwitting agent of chaos. Holding a 46-year-old movie to today’s racial standards isn’t fair practice—though it does happen—though it should be noted that Sellers’ benign minstrelsy got the film banned in India for a time. It’s difficult to look past the queasy conceit of Sellers’ character, but in truth, the film’s true contempt is reserved not for Bakshi, but for the stick-in-the-mud gatekeepers who are hosting the party and politely (or impolitely) pushing outsiders like him to the margins. He’s clumsy and ineffectual, but the film makes a strong argument for the liberating joys of disorder.

Though Edwards confines much of the action to a single location, he opens The Party with a hilariously outsized goof on a Gunga Din sequel gone awry. After flubbing a big shootout setpiece, the clueless Bakshi props up his foot to tie his shoe and accidentally detonates a giant fort set before the cameras are rolling. The director insists Bakshi will never work in pictures again, but when he relays Bakshi’s name to unctuous studio head General Fred R. Clutterbuck (J. Edward McKinley) for blacklisting, it winds up on the list of invitees for Clutterbuck’s industry party instead. The shindig takes place in a garishly appointed modern home with multiple levels, indoor and outdoor pools and fountains, and state-of-the-art remote-control gadgetry, in addition to comic standbys like swinging kitchen doors and guests donning wigs, tiaras, and toupees. The other guests treat Bakshi with polite disdain, but he finds a kindred spirit in Michèle Monet (Claudine Longet), an aspiring French actress who’s getting cajoled to the casting couch.

With Sellers cast as an amiable, old-fashioned klutz lost among the technological gizmos and runaway decadence of the modern world, The Party is Edwards’ attempt to import Jacques Tati to Hollywood, specifically Tati’s 1958 film Mon Oncle, which sets his Monsieur Hulot loose in an automated house. Edwards minimizes the dialogue as much as possible, and virtually none of the jokes are verbal. Long stretches of The Party stick Sellers in the middle of comic situations that wouldn’t play out much differently in a silent comedy: A dinner where Bakshi sits in a small, backless chair near a swinging door leads to cake getting smashed into a servant’s chest, while a slippery Cornish game hen winds up lodged on top of a woman’s tiara. And when the party really opens up, every well-heeled guest in attendance gets thrown into the pool.

The actual gags in The Party are often so musty that they aren’t funny—maybe they still were funny in movies produced half a century ago—but Edwards’ visual sophistication is a pleasure all the same. Edwards’ widescreen frame covers the expanse of the house set, which presents itself first as a sterile display of conspicuous living, but slowly evolves into a Rube Goldberg contraption that starts losing gears and springs until it collapses altogether. The film has a spirit of cheerful rebellion to it, and aligns itself wholly with Bakshi and Monet, who remain standing as this formal, antiseptic, snooty affair unravels around them. Whether Edwards intended it or not—and his inclusion of hippies in the third act points to yes—The Party seems keyed into the spirit of ’68, with the house representing the upending of old money and hidebound tradition. In that, poor put-upon Bakshi is the humblest of revolutionaries.

The 24-minute mini-doc “Inside The Party” mixes interview footage of the late Edwards with surviving talking heads from the cast and crew to get into the production’s unusual nature. Edwards wanted to make a completely silent movie with intertitles, but abandoned that idea early on; instead, the 63-page script left the director and his actors to improvise all the dialogue. The doc also addresses the on-again/off-again collaboration between Edwards and Sellers, who didn’t get along, but kept discovering each was essential to the other. “The Party Revolution: New Technology” explores the development of video-assist technology; due to the difficult combination of improvisation and precision that went into making the film, Edwards wanted to be able to see how a scene was working right after he shot it, and a then-cutting-edge video reference system made it possible. Brief, disposable interview profiles of Edwards, associate producer Ken Wales, and producer Walter Mirisch round out the set.