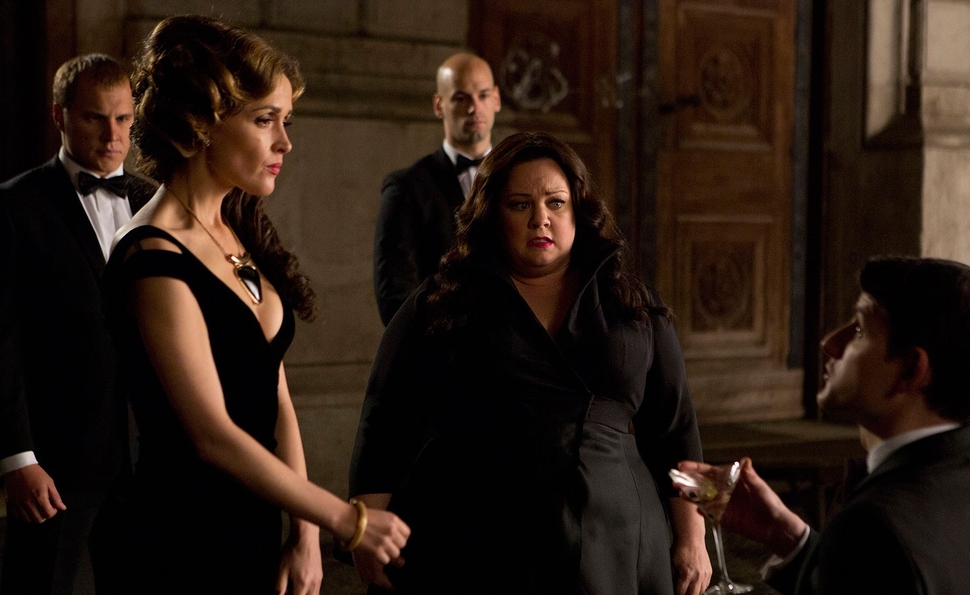 In two previous collaborations with director Paul Feig—Bridesmaids and The Heat—Melissa McCarthy has played characters who combine competency with craziness, heavily weighted toward the latter. McCarthy’s comic persona over the last half-decade has been defined by outsized confidence: She plays brash women who don’t let other people’s perceptions interfere with their extreme self-assurance, whether it’s warranted or not. In Spy, the third and thus-far best McCarthy/Feig collaboration, they bring new, deep shading to this character type, creating the best role of McCarthy’s career, and one of the best comedic roles, female or otherwise, in recent memory.

That role is one Susan Cooper, a meek, obsequious CIA analyst stuck working in “the basement,” providing earpiece assistance to her in-the-field super-agent, Bradley Fine (Jude Law, doing an American James Bond riff). Unlike The Heat’s ball-busting Officer Mullins, or Bridesmaids’ hyper-confident weirdo Megan, Susan initially exhibits none of the self-assurance and braggadocio of McCarthy’s previous two Feig-helmed roles; early on in Spy, she’s playing much more in the vein of her lovable Gilmore Girls character, Sookie St. James. Whereas most recent McCarthy roles start with a comic caricature, then fill in just enough emotional nuance to make her ostensibly a real person, Spy takes the reverse route, presenting Susan first as a relatable, humble figure, then building a larger-than-life story around her embracing her inner confidence and becoming the super-spy she was meant to be.

Susan’s journey to international Bond-dom kicks off when Agent Fine is killed in the field by the huge-haired scion of a criminal mastermind, Rayna Boyanov (Rose Byrne), whose father died at Fine’s hands while protecting a suitcase nuke. Now Rayna has the nuke, and intends to sell it to terrorists. Rayna informs the CIA that she knows the identities of all their top field agents—whose ranks include blustering boob Rick Ford (Jason Statham) and sleek siren Karen Walker (Morena Baccarin)—and intends to kill any who come after her. Traumatized and guilt-ridden by her role in Fine’s death, Susan presses her reluctant boss (the reliably great Allison Janney) to let her observe and report on Rayna in the field, with behind-the-scenes assistance from her fellow basement-dweller Nancy (relative newcomer Miranda Hart, turning in a scene-stealing performance reminiscent of McCarthy’s in Bridesmaids). Though initially giddy and empowered by her new elevated status, Susan soon discovers her superiors see her not as the sort of sophisticated, skilled undercover agent she imagines herself to be, but as a dowdy frump degraded into invisibility/repellence through ugly wigs and spy gadgets disguised as fungal spray and hemorrhoid medication.

Spy’s promotional campaign would have viewers believe McCarthy spends Spy playing into this image as an incompetent, silly woman in over her head, but Feig’s script slyly subverts both those expectations and the conventions of the spy-movie genre. Spy systematically reveals Susan as a brilliantly capable agent who’s both smart and physically adroit in ways that let McCarthy show off her considerable physical-comedy prowess without leaning too hard on fat-lady-go-boom gags. Susan isn’t polished or stoic in the manner expected of an international super-spy, but her enthusiasm and competency—particularly in comparison to the hyperbolic ineptitude of Statham’s Ford and the leering foolishness of a handsy Italian agent played by Peter Serafinowicz—make her more captivating and endearing than James Bond at his swankiest. She isn’t immune to ridicule within this world—this is, after all, a comedy—but Spy metes out her humiliations smartly, and spreads the indignity evenly across its delightfully game cast.

Though Spy is an ideal starring vehicle for McCarthy, it’s equally great as a comedic showcase for Byrne and Statham, who strive to match their co-star in terms of timing, physicality, and willingness to look foolish for the sake of a laugh. Statham mines the depths of his badass persona for gems of self-serious absurdity—and at least one memorable pratfall—and Byrne upends her innate sophistication in her portrayal of the bratty, blinkered Rayna. Spy’s increasingly labyrinthine plotting, with the revelation of a new double-cross or rogue agent seemingly every few scenes, could be read as a satirical comment on the sort of ludicrous developments that drive most spy movies. But really, it’s just an excuse to get these characters, along with a supporting cast that runs deep with comedic talent, together in heightened situations where they can needle each other in hilarious, inventive ways.

Feig’s greatest asset as a director is bringing together talented, funny people and more or less staying out of their way, and Spy bears that out. There are some flourishes that nod to the genre Spy is satirizing, and the requisite action setpieces are staged capably enough, but usually with a clear focus on jokes over visual refinement. (One exception: a standout hand-to-hand combat sequence staged in a kitchen that blends fight choreography and banter to memorable ends.) But Spy never lets its genre conceit get in the way of its comedy, which delivers more laugh-out-loud moments than any other mainstream comedy so far this year. It’s rare for comedies to be both progressive and broadly silly, but Spy walks that thin line with exceptional grace, and even dignity—which, considering how often McCarthy’s character is physically groped and verbally insulted, is saying something. The comedic chemistry between Feig and McCarthy is old news, but with Spy, they show they still have something new, and maybe even important, to offer between the laugh-lines.