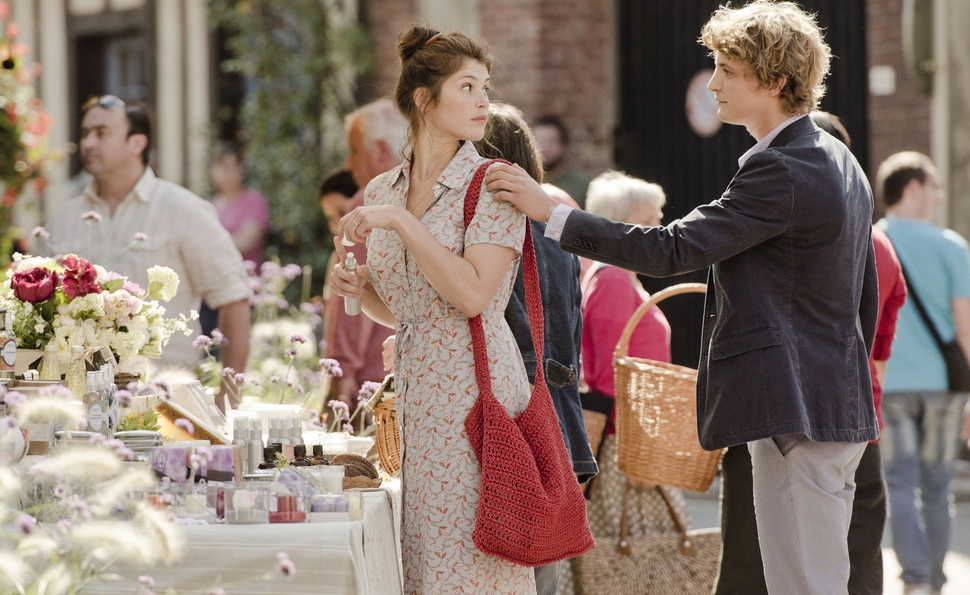 “Nothing happens but at the same time it’s interesting,” Gemma Bovery, a young, married Englishwoman living in Normandy, says of Madame Bovary. It’s her first time through the Gustave Flaubert novel whose heroine (nearly) shares her name. She’s speaking to Martin (Fabrice Luchini), who first read it at the age of 16 and for whom it’s become lifelong obsession. Though he’s left the Paris literary scene to take over his late father’s bakery—and, he hopes, find a “peaceful, balanced life”—Martin still sees the world through the sometimes-distorted lens of books. After befriending Gemma and her husband Charlie (Jason Flemyng), Martin grows concerned that their lives will start to imitate art, especially when he senses she’s found her Rodolphe in the form of Hervé (Niels Schneider), an angel-haired law student from a wealthy local family.

Directed by Anne Fontaine (Coco Before Chanel), Gemma Bovery adapts a graphic novel from veteran English cartoonist Posy Simmonds that was first serialized in the late 1990s. The film arrives just a few years after Tamara Drewe, another Simmonds adaptation also starring Arterton that also toyed with a classic of 19th-century literature by contrasting its world with contemporary times. In Drewe, directed by Stephen Frears, it was Thomas Hardy’s Far From The Madding Crowd. As before, something seems to have gotten lost in the translation of the translation. Alternating farce with drama, Fontaine never makes it clear what sort of film she’s making, mostly settling for a tone best described as “nearly droll.” Martin, who admits that Gemma’s appearance marks “the end of 10 years of sexual tranquility,” can’t stop leering at her, and the camera leers along with her. He’s a buffoon, and the film never pretends otherwise, but there’s no real contrast between the way Gemma’s shot and the way she’s portrayed when he’s not around.

What almost rescues the film is Arterton’s performance. Gemma observes that Madame Bovery, the quintessential bored wife, “has almost become an archetype,” but she works much harder than the rest of the film to keep Gemma from becoming an overly familiar character. Arterton first caught the attention of most as a Bond girl in Quantum Of Solace and she’s kept busy in high-profile, if not especially good, movies like Clash Of The Titans. But she’s also been quietly racking up impressive performances in smaller films, like Neil Jordan’s under-seen revisionist vampire movie Byzantium, and here she keeps hinting at depths to her character the film doesn’t seem interested in exploring.

Instead, it goes from glib to glibber. Martin attempts to intervene before Gemma meets Madame Bovary’s fate, begging her to throw out some rat poison she’s purchased to fight off an influx of field mice and attempting to thwart her affair. It’s made all the broader by Luchini’s performance, which is just a hair away from being a middle-aged variation on a horny teen in an ’80s comedy. (The film even gives him a shrewish wife, in case he didn’t seem pathetic enough.) When it works toward its own version of Flaubert’s tragic conclusion, it feels more cruel than clever as it shortchanges the only character of any real interest for the sake of laughs. That none of the men around her really know what’s happening in her head—shades of Emma Bovary—is the film’s overarching joke, and maybe the film’s ultimate point, but the laughs have hollowed out by the time it gets there.