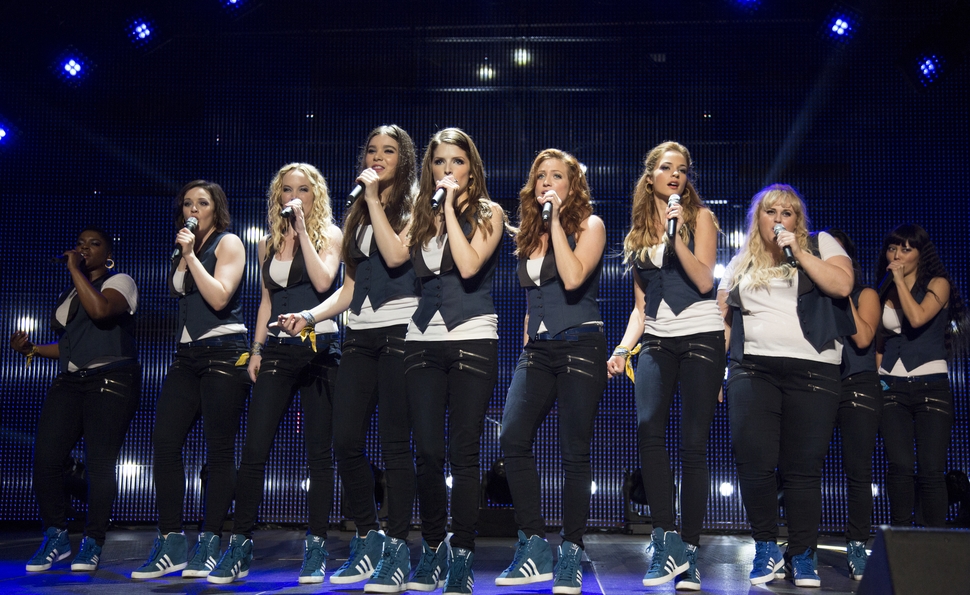 As Pitch Perfect 2 begins, the Barden University Bellas are the reigning college a cappella big shots, three-time national champions on a victory tour that includes performing at President Obama’s birthday celebration. They have a big budget, their own sorority-esque house, and flashy production values—intricate choreography, pyrotechnics, acrobatics, aerial work, ribbon-dancing—which they deploy onstage with little regard for rhythm or good taste. They’ve also, to borrow a phrase that returning screenwriter Kay Cannon uses more than once, “lost their harmony.” Basically, they’re a mess out there, flailing and sweating through overwrought, flashy performances that are so concerned with giving the people what they want that they overshadow what made them a success in the first place. It’s generous of Pitch Perfect 2 to seed its script with such an apt metaphor for the film itself.

The sequel to the 2012 surprise hit starring Anna Kendrick, Pitch Perfect 2 doubles down on everything that endeared its successor to a still-growing legion of fans who prefix random words with “aca-” to indicate their devotion. The musical numbers are bigger and more numerous (and, on the whole, better), the humor is even more driven by non sequiturs and shock gags, and Rebel Wilson, playing overconfident, strangely lovable grotesquerie Fat Amy, is given an even bigger spotlight. Hell, there’s even a loving rendition of “Cups,” the Carter Family reworking that became an unlikely radio hit for Kendrick in the wake of the first movie, plus another original song, “Flashlight,” that’s making a clear bid to do the same this time out. But while there are individual delights within Pitch Perfect 2’s 115 minutes, they don’t add up to a functional, coherent film. There’s no harmony, only loud grandstanding.

It’s a shame Pitch Perfect 2 succumbs so readily and often to the allure of the easy joke and the can’t-miss musical production number, because there’s some real potential in the script. The Bellas’ fall from grace—stemming from a Fat Amy blunder that humiliates them on a national scale and gets them stripped of their title—coincides with the impending graduation of Kendrick’s Beca, Fat Amy, Chloe (Brittany Snow), and the other Bellas from the first movie. The public undermining of all they’ve achieved, combined with the uncertainty and fear that accompanies leaving college for the real world, lends some gravitas to an otherwise helium-light movie. And the addition of hyper-enthusiastic, goofy new “legacy” Bella Emily (Hailee Steinfeld) offers both a corrective to Beca’s resolute apathy and a suggestion of where the series could go in future entries—or it would, if Steinfeld’s performance indicated she could anchor a future Pitch Perfect movie the way Kendrick has. (It doesn’t.) But Cannon’s script doesn’t take these ideas anywhere interesting. Instead, it defaults to the same underdog narrative that propelled the first movie, while leaving those bigger ideas to flit around the edges of the movie before being more or less forgotten.

The underdog narrative focuses on the A Capella World Championship in Copenhagen, where the Bellas seek to reclaim their pride and instatement in the national collegiate a cappella organization by beating out the reigning German champions, Das Sound Machine, a militaristic group of singing übermensch. But the film doesn’t land in Copenhagen until its brief final act, spending the majority of its runtime rehashing many of the first film’s standout sequences. The most egregious re-heating stems from Pitch Perfect’s “riff-off” sequence, which Pitch Perfect 2 rejiggers as a sort of underground a cappella fight club overseen by an eccentric millionaire played by David Cross. This pumped-up riff-off pits the Bellas against Das Sound Machine, Barden’s male a cappella group The Treblemakers, desperate alumni group The Tone Hangers (with Jason Jones and Joe Lo Truglio returning from the first film, joined this time by Reggie Watts and John Hodgman), and, for some (inspired?) reason, the Green Bay Packers. Jammed with familiar faces, familiar songs, and familiar jokes, Pitch Perfect 2’s riff-off epitomizes the film’s “give ’em what they want” mentality, and while it’s fairly exhilarating in the moment—like its predecessor, Pitch Perfect 2 is frequently tingle-inducing with its intricate a cappella arrangements of familiar pop songs—it feels hollow in the context of a film that’s so clearly going through the motions.

There are a few successful additions to the Pitch Perfect establishment, though, the best by far being Keegan-Michael Key as the head producer at the recording studio where Beca is interning. Key steals every scene he’s in, and his presence somehow makes a cameo appearance from Snoop Dogg (singing Christmas carols, no less) not only tolerable, but funny. And while the film’s heightened focus on Fat Amy contributes to its overall scattered vibe, Wilson’s comedic timing remains unique and engaging. Das Sound Machine, for their part, perform most of the film’s best musical numbers, and while too much of the humor surrounding them is funny-accent-driven, primary DSMs Kommissar (Birgitte Hjort Sørensen) and Pieter (Flula Borg) are fun antagonists, particularly Kommissar, whose towering Teutonic presence brings out latent sapphic tendencies in an awestruck Beca.

But while there are plenty of high notes in Pitch Perfect 2, the tone is off, and much of that, unfortunately, can be attributed to first-time feature director Elizabeth Banks. (Banks also returns in front of the camera as a cappella commentator/commissioner Gail Abernathy-McKadden, but her presence doesn’t balance out the ostensibly ironic sexist, homophobic, and racist comments from her partner in a cappella commentary, played by John Michael Higgins.) The sense of pacing and place-setting are off-kilter throughout the film, and lots of the self-conscious post-production flourishes are more distracting than distinctive. To borrow one of Pieter’s phrases, Pitch Perfect 2 is a “heated mess,” in spite of a handful of transcendent moments and a lot more just-okay ones. The Bellas eventually find their sound again, but Banks and Pitch Perfect 2 never manage to do the same: They start off-key and stay there. The sequel reprises enough of what worked in the first film to appease and please those hoping for more of the same. But as a stand-alone number, Pitch Perfect 2 will earn the series no new aca-lytes.