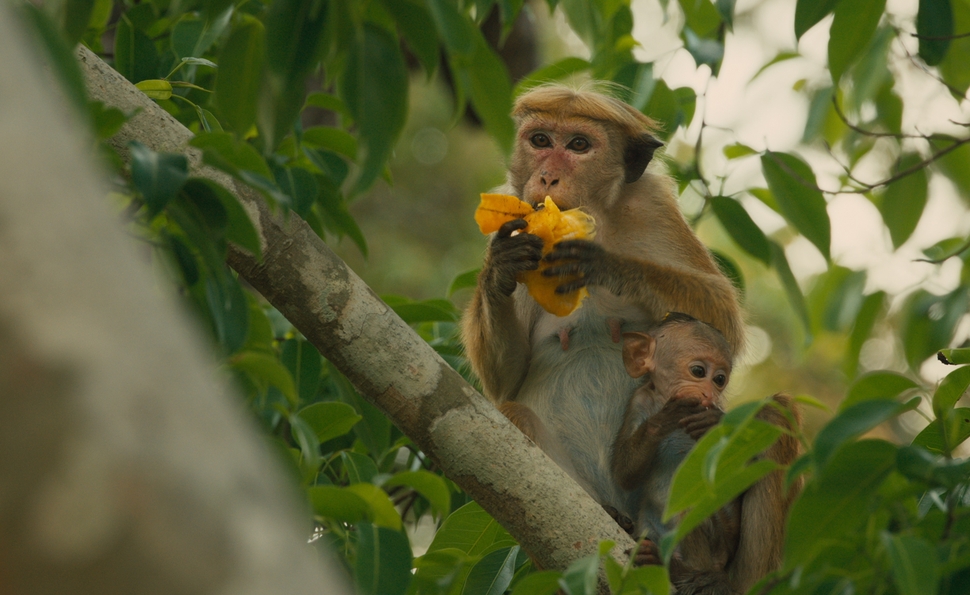 Monkeys are jerks. They lie, they steal, they wage war, and they adhere to a rigid social order that creates castes of haves and have-nots. They’re also funny, loyal, creative, and capable of deep love—or something that looks a lot like it—for each other. In other words, they’re a lot like humans, which explains why monkeys and their primate brethren are the most studied animals on Earth. It’s easy, even inevitable, to read human-like motivations into monkeys’ behavior, which makes them a prime candidate for the Disneynature treatment.

Like other Disneynature docu-fiction features before it, the new Monkey Kingdom imposes a kid-friendly narrative on its animal subjects, in this case, a group of toque macaques living in the abandoned ruins of an ancient city in the Sri Lankan jungle. And as with previous entries in Disney’s independent nature-doc arm, that narrative is informed by the actual observed behavior of its wild subjects, keeping its blatant anthropomorphization just within the realm of credibility. Even so, Monkey Kingdom’s fairy-tale-like story—one that’s been generously massaged through selective editing—is pronounced by the standards of so-called “non-fiction” filmmaking. But because monkeys are such easy human analogues, those who can accept the film’s fictionalized reality will find it provides nearly as much insight into the human condition as the monkey one.

Like 2014’s Disneynature offering Bears, Monkey Kingdom follows a single mother, Maya, struggling to provide for her offspring, in this case the newborn Kip. But unlike Bears’ heroic matriarch, Maya is part of a large community, in which she’s the low monkey on the totem pole—or, in Monkey Kingdom’s case, the fig tree. Maya’s society is ruled by the 1 percent: alpha male Raja and a trio of females, collectively called The Sisterhood, who all have first claim on food and shelter, and purposely abuse lower-class monkeys. This established hierarchy sees Maya and her fellow working-class monkeys scrounging for survival and deferring to their “betters” in all things. Making matters worse, Raja has driven the father of Maya’s child, a rogue named Kumar, out of their society, leaving Maya and Kip without protection. But this survival story eventually morphs into a rags-to-riches narrative when a society-changing event topples the monkey monarchy and sets Maya and Kumar, with Kip in tow, on a hero’s journey to save not just themselves, but their entire community.

Maya’s journey so closely resembles that of a plucky young Disney heroine, only with more bug-eating and visible nipples, that it’s easy to indulge suspicions of manipulation on the part of the filmmakers, particularly from an outgrowth of a company that notoriously staged lemming mass suicides in 1958. But Alastair Fothergill, co-director of Monkey Kingdom and previous Disneynature films, maintains that Disneynature commits to a policy of non-intervention, right down to contracts that say filmmakers cannot “be forced to create a narrative or a narration that [isn’t] scientifically accurate.” If that is indeed the case, Fothergill and co-director Mark Linfield stumbled on a hell of a story with Monkey Kingdom, which balances drama, humor, and insight with the sort of aplomb many fictional screenplays don’t manage.

That said, Fothergill, Linfield, and their fellow Disneynature filmmakers do affect the tone of these natural explorations, and Monkey Kingdom is no exception. Taking its cue from its subjects, Monkey Kingdom is more playful and humorous than any of its Disneynature predecessors. Much of that quality can be attributed to Tina Fey’s wonderful narration, which sells the sort of humorous asides that might sound unforgivably cheesy coming out of anyone else. Fey’s sardonic side lends an appealing edge to multiple scenes of monkey mischief, like a standout sequence where Maya and her fellow outcasts raid a human child’s birthday party for food and fun. (As the monkeys dash away from the scene of the crime, leaving chaos in their wake, Fey quips, “Happy birthday, kid.”) But she also brings a softer maternal energy to the film’s quieter, more emotional moments, particularly those between mother and son.

Monkey Kingdom is similarly spirited in its musical choices, going for the obvious but perfect cue when introducing its subjects—“(Theme From) The Monkees”—and getting cheeky when introducing Maya’s paramour (Salt-N-Pepa’s “Whatta Man”). There’s even a rousing sequence that sees the scrappy monkey crew learning to survive in the big city, stealing food and sleeping in cell-phone towers, set to Sigma and Paloma Faith’s triumphant “Changing.” That part of the film takes on the energy of a training montage, and segues into a monkey victory that reinforces that perception.

Despite such canny choices, though, Monkey Kingdom is undeniably pitched at children, trafficking in the sort of broad characterizations and goofy, rounded-edge humor that can be appreciated by very young viewers. Disneynature’s admirable stated goal is to create a new generation of environmentalists, baking conservation efforts into both its product and its marketing, and sharing stories that are intended to get children excited about the natural world. All of that is evident in Monkey Kingdom’s overtly admiring approach to its subjects, which are more complex—and riddled with herpes—than this reverential portrait would indicate. But everything Monkey Kingdom lacks in scientific rigor, it makes up for in pure entertainment value—and then some.