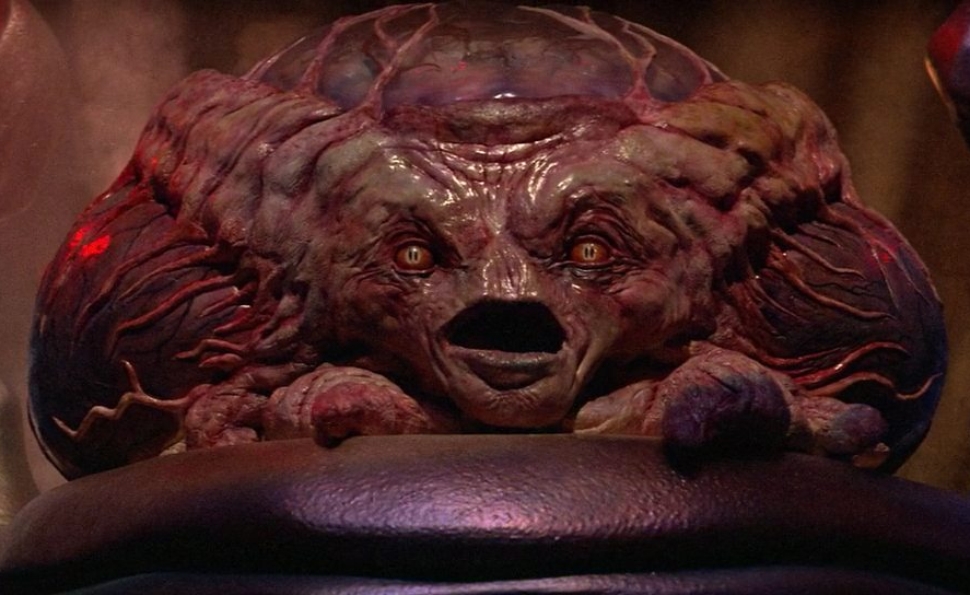 Tobe Hooper’s 1986 Invaders From Mars is a remake of William Cameron Menzies’ 1953 science-fiction/horror classic, though at times it plays like a direct response to the movies of Steven Spielberg—including the Hooper/Spielberg collaboration Poltergeist. On Scream! Factory’s new Invaders From Mars Blu-ray edition, Hooper doesn’t say a word about the Spielberg connection in his director’s commentary, and the track’s moderator, Michael Felcher, never brings it up. But the apparent nods to Hooper’s former boss pile up quickly: a random Jaws-style dolly-zoom; E.T.-like shots both in a classroom frog-dissection scene and in a suburban spaceship-landing; a Poltergeist-style staticky TV; and a human/alien communication that takes the form of five vowels, similar to the five tones of Close Encounters. Invaders From Mars’ boy hero even keeps a packet of candy by his bedside, although his confection of choice is M&Ms, not Reese’s Pieces.

This could all just be coincidence—the inevitable, organic result of making a genre picture in the mid-1980s, when B-movies would swipe the form and content of popular blockbusters. Also, Hooper has never said anything negative about working with Spielberg, so there’s no reason to believe he was using Invaders From Mars to work through any grudge. Still, this does feel like a personal project, paying homage to a film that impressed the young Hooper with its surrealist set-design and sly social commentary. The comparisons and contrasts between Menzies’ film and contemporaneous science fiction seem very much part of the point.

In the original Invaders From Mars, a grade-school-aged kid sees a flying saucer in his neighborhood, and becomes convinced that all the adults in his life—parents included—are being mind-controlled by aliens. Hooper and his screenwriters, Dan O’Bannon and Don Jakoby, copy that plot (originally written for the screen by Richard Blake, from a John Tucker Battle short story), right down to the Marine forces that ineffectually try to shoot and bomb their way out of Martian traps. In the E.T./Close Encounters era though—not to mention the age of Rambo—there’s something more subversive about a plucky boy who finds aliens in his backyard that aren’t cute, but heinous, and that aren’t easily contained by military intervention.

The remake stars Hunter Carson (son of filmmaker L.M. Kit Carson and actress Karen Black) as the boy, David Gardner, who begins to suspect something’s wrong with his folks when he sees his mom (Laraine Newman) consuming heavily salted raw hamburger, and his dad (Timothy Bottoms) swilling down scalding hot coffee laced with a fistful of saccharine tablets. When David notices his science teacher Mrs. McKeltch (Louise Fletcher) is even testier than usual, and that she’s sporting the same bandage on the back of her neck as his parents, he confesses his suspicions to the school nurse, Linda Magnusson (played by Black). Soon, the two of them are exploring an fantastic underground lair/spacecraft, populated by gangly, toothy creatures and a tentacled brain known as The Supreme Intelligence.

Invaders From Mars was the second of a three-movie deal with Cannon Pictures, which snapped Hooper up after Poltergeist as part of Menahem Golan and Yoram Globus’ effort to move out of producing drive-in pictures and start making bigger, more original fare. Hooper’s first Cannon film was 1985’s Lifeforce, an alternately campy and sexy action-thriller about space vampires, also written by O’Bannon and Jakoby (from a Colin Wilson novel). The follow-up is a companion piece of sorts, even though it has less gore and nudity, and more kid’s-eye views of grown-ups acting strangely. As with Lifeforce, Hooper assembled phenomenal young effects technicians and craftsmen, led by Stan Winston, who brought much of this crew with him to work on James Cameron’s Aliens that same year. (It won Winston his first Oscar.) The Invaders From Mars source material, sturdy as it is, mainly feels like a loose frame Hooper and his team filled with cool-looking monsters and elaborate sets.

But while it’s first and foremost a terrific showcase for some imaginative designers, Invaders From Mars also holds together fairly well as a movie—or at least better than the choppy Lifeforce does. Reunited with his Texas Chain Saw Massacre cinematographer, Daniel Pearl, Hooper invests a simple story with plenty of dazzle, using state-of-the-art rock-concert lighting and swooping camera moves. Most importantly, he recreates the feeling and meaning of Menzies’ original, which captures so well how in the 1950s, children were more terrified of adults than communists and the A-bomb combined. During the decade when Spielberg’s suburban fantasias dominated, Hooper reached back to the same kind of movies that influenced the likes of E.T., and shaped them into a counter-narrative. Here, the manicured backyards look eerie, the technology is nightmarish, and the fresh-faced protagonist is hunted by a relentless, mean, brainwashed elementary-school teacher. She’s like Leatherface, but with a ruler in her hand instead of a Poulan 306a.

In addition to that somewhat rambling Hooper commentary/interview, the main extra on Scream! Factory’s Blu-ray is a 30-minute featurette, featuring conversations with Hooper and a few key members of his effects and makeup team. Hooper explains a little about how he wanted to make a children’s film, while Cannon wanted him to stick with horror, which may have been why Invaders From Mars fell through the cracks and didn’t really find an audience until it came out on VHS. Meanwhile, his crew talks about the camaraderie and creativity on the set, and how even though they had a relatively big budget compared to what they were used to, they were still working fast and cheap, at a time when there were fewer restrictions on child actors or set materials. (One of the now-banned brands of foam they used ended up starting a raging fire.) Mostly, everyone talks about how they focused on making a film where everything would be “tangible”—where even the spaceship would ooze.