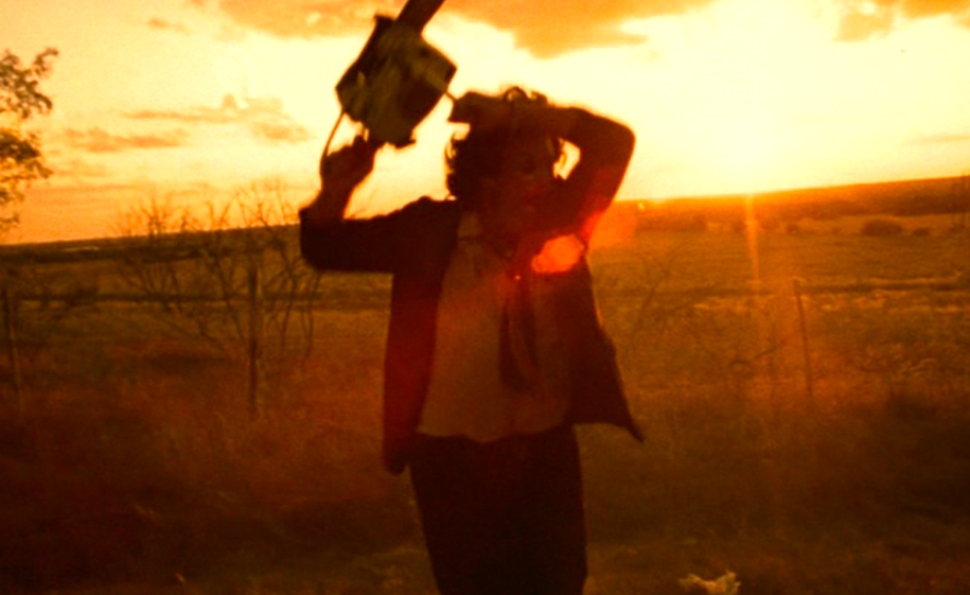 As disgusting, harrowing, and ugly as the 1974 horror classic The Texas Chain Saw Massacre is, the film has moments of eerie beauty. Writer-director/producer Tobe Hooper and his co-writer/co-producer Kim Henkel assembled a cast and crew drawn from Austin-area film students and movie buffs, all of whom had ideas about how to bring their best to this grubby little slasher. Gunnar Hansen studied the movements and speech of the mentally handicapped to inform his portrayal of the hulking, masked killer “Leatherface.” Cinematographer Daniel Pearl laid what little pieces of track he had all over the set to add fluid movement and unusual angles. Hooper has claimed he was inspired by news coverage of Watergate and Vietnam, as well as by casually morbid pop songs like Loudon Wainwright III’s “Dead Skunk.” Put all that together, and The Texas Chain Saw Massacre becomes simultaneously assaultive and artful. Hooper fills the background of the movie with banal horrors—radio reports about raging fires and epidemics, and images of rusty junk and slaughterhouses—while Pearl executes gorgeously curving low-angle tracking shots, and finishes the film with a lovely scene of Leatherface twirling madly at sunrise with his roaring saw.

People remember the assaultive part of The Texas Chain Saw Massacre most, though. The movie follows the sweet-natured Sally Hardesty (played by Marilyn Burns) and her obnoxious paraplegic brother Franklin (Paul A. Partain) as they take a van trip with three of their shaggy friends to their family’s crumbling old homestead in the country. When two of the Hardestys’ pals make their way to a neighboring house to ask for some help, they’re separately surprised by Leatherface, who brains one with a hammer and hangs the other on a meathook, where she’s forced to watch her companion get hacked up by a chainsaw. The murders happen suddenly in The Texas Chain Saw Massacre, and while Leatherface isn’t graceful, he’s alarmingly quick, which makes the killing all the more unexpected. There’s none of the gradual build-up audiences usually experience with horror movies. The first victim walks into the house, peers down the dark foyer toward an open doorway—captured in a nifty series of quick-cuts that get closer and closer—and then before he has a chance to react, he’s twitching on the floor with a massive head-wound.

A lot about The Texas Chain Saw Massacre defies convention, including the way the official title spells “chainsaw.” Hooper had some pie-in-the-sky idea that he could get a PG rating for the movie, so there’s no nudity, very little profanity, and contrary to what most people who’ve seen the film may recall, relatively little blood and gore. Most of the action is set during the daytime—although the scenes at night are harrowing, in part because they’re shot with minimal light—and an early scene in which the quintet of heroes easily overpower a creepy hitchhiker suggests they have the advantage over any monster. But soon the friends are separated, night descends, and Leatherface is joined by the other members of his family, including a couple of familiar faces from earlier in the story. Before long, only Sally remains, to scream endlessly into the void.

Make no mistake: The Texas Chain Saw Massacre was unpleasant in 1974, and between all the shrieking, rural grotesques, and sheets of sweat coating the actors, it’s still uncomfortable to watch 40 years later. The opening narration by John Larroquette (yes, that John Larroquette) describes the events of the movie as having happened in the summer of 1973, and that’s true, because the cast and crew barely endured a grueling shoot in the Texas heat that summer, and their bedraggledness is documented in the film. But the hard work paid off in some rich visual textures—from mesmerizing lens flares to the exhaust fumes billowing off Leatherface’s chainsaw—which look better than ever in the latest 4K digital transfer. When an exhausted, terrified Sally sits in a gas-station office between an ominous open door and a hellish-looking barbecue pit, the scene is almost unbearably tense. But it’s also edited so crisply, and shot with such an overpowering sense of decay, that it’s hard not to look on all the dismemberment and despair and think, “Man, that’s pretty.”

Dark Sky’s new Texas Chain Saw Massacre 40th-anniversary set contains two Blu-rays, and two DVDs that echo their contents. The discs with the actual movie add four commentary tracks, amounting to six solid hours of not-all-that-fond memories of bickering and nausea. The secondary discs add hours of new and old documentaries, including one hourlong comprehensive doc featuring contentious interviews with the major members of the cast and crew (most of whom are still pissed that they didn’t make any money from a movie that became a massive hit), and one offbeat doc that compiles seven vignettes dealing with everything from Pearl’s cinematography to the strange post-film history of the murder-house. Hearing the reminiscences of these normal-sounding people—including the genteel Hansen—demystifies Texas Chain Saw to an extent, making the movie seem more like the work of young, rough artists, rather than a quasi-documentary about maniacs, shot by other maniacs. But when Burns talks about how the crew carelessly found a discarded dirty rag on the floor to serve as her gag in in one scene, and Hansen describes how foul he smelled by the end of the shoot, the movie’s docu-realistic qualities re-emerge. On one level, this is a film about miserable people, damn near killing themselves to make something lasting.