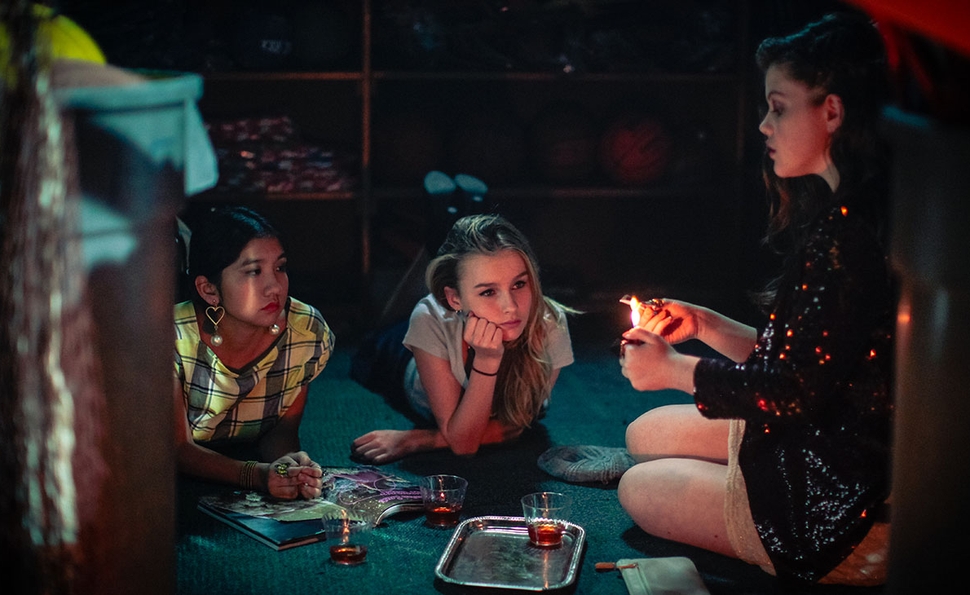 The Sisterhood Of Night

There’s a fair bit of gushy ridiculousness to The Sisterhood Of Night, a teen drama that mates the hushed, lurid melodrama of The Virgin Suicides with an arch contemporary teen comedy, all by way of The Crucible. But it helps to know going in that the over-the-top elements are fully intentional. The film opens with a gasping expository voiceover that sets the scene as though the story were an up-to-the-minute urban-legend parody: The line “and she never logged in again” feels like the end of a campfire horror story for Facebook addicts. But the borderline-hysteric tone is entirely deliberate. Like The Crucible—or for that matter, Election or Heathers—this is a story specifically about how the cloistered environs of high school breed a form of hysteria, where tiny things can come to seem fantastically important.

In The Sisterhood Of Night, the first tiny thing is a petty feud between two teenage girls, Mary (Georgie Henley, best known as Lucy from the live-action Narnia movies) and Emily (Kara Hayward, the grave runaway lover-in-miniature from Wes Anderson’s Moonrise Kingdom). What starts as a jealous dispute over a school-play audition expands into a fanatic rivalry, especially once Mary starts a clique she calls The Sisterhood Of The Night. Her first recruits, Catherine (Willa Cuthrell) and Lavinia (Olivia DeJonge), are ordinary-enough girls who are happy to take comfort in secrecy and friendship, especially given their problems at home: Catherine’s mother has cancer, while Lavinia misses her father after her parents’ divorce, and can’t come to terms with her mother dating.

But to the rest of the school, aware of the secret club and with no idea what goes on inside it, the Sisterhood is an endless source of speculation and envy. Mary’s decision to take her life offline means she isn’t part of the social-media share-athon that dominates her schoolmates’ lives, and just the gobsmacking idea of privacy seems to be more than her peers can bear. Rumors about the club abound, and Mary’s group become low-key school superstars, to her obvious delight.

Emily, in particular, gets so jealous over her exclusion that she starts inventing incidents on her barely read blog, and staging scenes over the Sisterhood in public. Before long, just as in The Crucible—roughly based on the Salem Witch Trials—a mania is spreading through the girls at their school, as more and more 14-to-16-year-olds claim that the Sisterhood involved them in Satanic rituals and sex-cult rites. The adults, as clueless and ineffective as any parents in a John Hughes movie (though more sincere and well-meaning), have no idea how to cope, or how to separate truth from fiction. And Mary, enjoying the attention and Emily’s increasingly savage longing to belong, doesn’t help matters by further playing up the Sisterhood’s secrecy. Her silence turns a hangout-group, where the most inimical plot involves practicing for the school variety show, into a cult, at least in the popular imagination.

The writing and performances in The Sisterhood Of Night are overblown in a way that’s just short of laughable: Emily and Mary have so many snarky, accusatory face-offs that this might almost be called Catfight: The Movie. The Crystal Method’s ambient score brings in a sullen intensity that matches all the heavily mascara’d glowers the girls aim at each other. At its worst, the film feels like an episode of Glee, with characters acting out preposterously oversized feelings as broad metaphors, trying to communicate the intensity of teenage emotional crises by blowing them up to parade-float size. When Emily, fresh off a montage showing her growing blog audience, marches through the school in triumphant slow motion, the school’s lesser life forms gaping in awe and falling away from her path, the film feels incapable of making a serious point about anything.

But as silly as it is, Sisterhood is smart as well, about the modern draw of victimization and attention, and how people (not just girls, and not just teenagers) who live life on a perpetually scrolling online stage can become starved for validation in any form. First-time screenwriter Marilyn Fu (working from a Steven Millhauser short story) and first-time feature director Caryn Waechter get straight at the heart of young female friendships, which can seem painfully intense whether they’re serving as a safe harbor or just creating a bottomless need for approval. And they bring a plausibility to all the insanity, in part by dialing down when necessary, to show just how much these girls need real connection more than the fake connection of online gossip, and friends rather than Facebook-friends.

That same need for connection stretches throughout the film, especially where Fu and Waechter deal with their adult cast. Catherine’s whole family is suffering and trying to hold onto each other, especially her mother, who has no intention of making her daughter suffer as well. Lavinia’s mom is just trying to get on with her life after a painful breakup. And Kal Penn helps ground the film as a sympathetic guidance counselor who can’t force his charges to confide in him, or even see reason, but can at least bring humor, insight, and honest caring to the table. The grownups give into the mass hysteria in their own way, by throwing blame, ignoring the situation, or mounting their own whisper campaigns. But they’re also permitted to be human, with needs a little more nuanced than their kids’, but no less raw.

Sisterhood Of Night ends in a place that still feels both silly and sweet. It strongly echoes the end of Jafar Panahi’s Offside, a very different movie about teenage girls embracing a form of group hysteria, in the form of an Iranian World Cup match that excludes them because of their gender. In their ways, both films embrace the comedy of a small group of fanatics, fighting for what they think they need, and coming out on the other side in a small form of triumph. And both films could be seen as faintly ridiculous to outsiders. But in both cases, that’s part of the point: Strong emotion and big drama can look ridiculous to the people who aren’t experiencing it. To those in the mix, though, it’s a potent drug. Sisterhood just inhales deeper and more willingly than most teen movies.