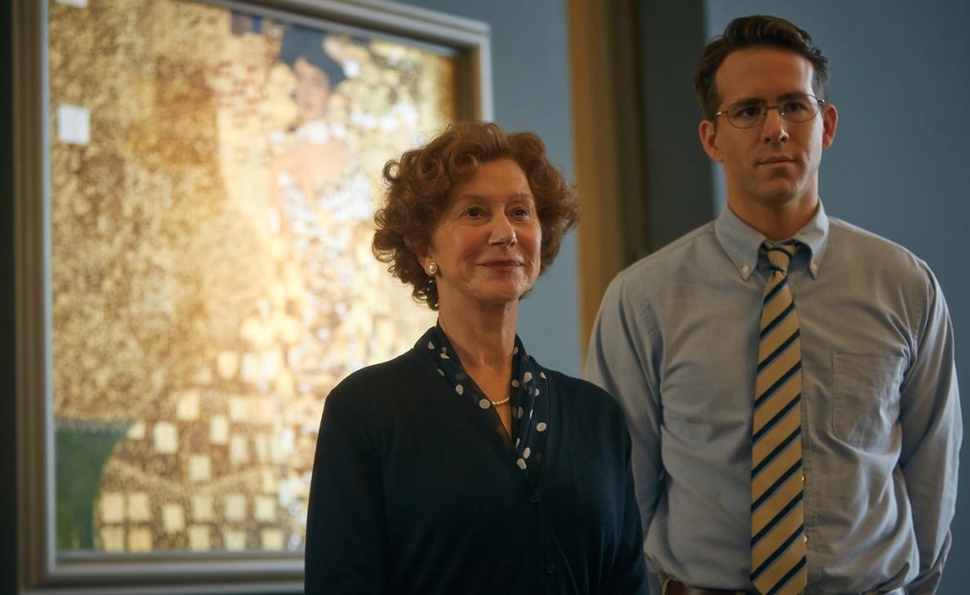 The tradition of the Great White Savior movie has long been noted and lampooned: At this point, any film about a catastrophe in a predominately non-white country, but processed primarily through the travails of a white protagonist, is guaranteed to draw a certain amount of scorn from the critical community. Woman In Gold is a rarer breed: a movie that feels like a Great White Savior film even though everyone in the film is white. Based on the true-life story of Maria Altmann, who spent nearly a decade in a legal battle with Austria, trying to reclaim art stolen from her family by the Nazis, Woman In Gold puts Altmann in the role normally occupied by the sufferers in GWS movies: She’s soulful and sympathetic, but largely helpless in her own cause. It falls to a bland, idealized hero to fix the problem, just as it falls to her to provide the pain that motivates him, then largely stand back and let him work.

Helen Mirren starts as the modern-day version of Maria, an elderly Jewish boutique-owner who seems largely content with her life in Los Angeles until her older sister dies, leaving Maria with a roomful of memorabilia that brings the past to life again. For the first time in decades, Maria starts musing over what she went through in 1940s Vienna, when the Nazis began persecuting Jews and seizing their assets, including a Klimt painting of Maria’s long-dead aunt Adele. Now, the painting is worth more than $100 million, and it hangs in a Vienna gallery. Initially, Maria has to suborn lawyer Randol Schoenberg, descendant of friends of her family, into investigating whether she has any recourse through Austria’s new reparations program. But when the gallery heads and Austria’s government push back over this particular Klimt portrait, commonly referred to as “Austria’s Mona Lisa,” Schoenberg undergoes a sort of political, religious, ethnic, and personal awakening, and takes up the cause as his own.

Woman In Gold has some powerful material to bring to bear, from the standard-issue legal-underdog truth-to-power story to the painful Holocaust-sidebar story, which has a younger version of Maria (played by Orphan Black’s always-effective Tatiana Maslany) getting married, losing her privilege and her family, and literally fleeing Nazi gunfire in a series of flashbacks. But director Simon Curtis and first-time screenwriter Alexi Kaye Campbell constantly push too hard and too forcefully, laying on schmaltz where none is needed. Ryan Reynolds plays Randol as an incompetent on the brink of collapse before Maria and her cause enter his life; broke and in debt after his legal practice fails, he starts as the kind of spastic loser who shows up rumpled and clutching his briefcase like a life preserver during a job interview at a high-powered firm, and spills all his notes on the floor at a key meeting. And for added effect, he’s trying to support a newborn and justify his cause to his wife, inexplicably played by Katie Holmes, who only gets a few lines in standard-issue doubtful-but-dutiful mode. But before long, he’s confidently joking in front of the Supreme Court in an immaculate suit, because Having A Cause is like magic.

Mirren, meanwhile, gives modern-day Maria plenty of the spine and spunk expected from any Mirren character. (She adds an effective Austrian accent, to boot.) But she has to work around the script, which largely wants her to alternate between supporting Randol’s efforts and undermining them, while perpetually pausing to stare into empty rooms as the latest flashback coalesces around her. Just as in any GWS movie, the pain is all hers, but she’s still a supporting character in her own story, waiting for Randol to save her through research montages and an escalating series of confrontations with Austrian functionaries portrayed as only slightly less Satanic than the Nazi art-thieves themselves.

Much like Curtis’ last film, My Week With Marilyn, Woman In Gold centers on a memorable performance from a terrific actress, a doltish but well-intentioned Everyman hero, and a mighty glossy, heavily shaped version of a true-life story. Like Marilyn, Woman In Gold is beautifully shot (apart from the transitions into flashbacks, which cross into creepy sentimentality with their open, shameless evocation of ghosts emerging from the past). But unlike Marilyn, it can be leaden at times, particularly when lingering on scenes meant to prompt emotion: Randol breaking down in a men’s bathroom after looking at a Holocaust memorial; Maria trading a long, near-hysterical goodbye with her parents. And Woman has the further problem of leaving out significant historical truths in order to focus on pieces with no real relevance to the story, like a friendly Austrian journalist (played by Daniel Brühl) who hangs about exchanging exposition with Randol and Maria, but has an awful lot of screen time for someone who never develops an identity.

But Woman In Gold’s primary issue is the way it oversells its own story by slathering on a gut-wrenching emotional score (by Martin Phipps and Hans Zimmer) and leaning on the idea that Maria and Randol are the Little Leaguers going up to bat against malevolent titans who should be able to crush them with a single pitch. Like the GWS films it emulates, it fails to give its characters real humanity instead of making them grand symbols of inhumanity, injustice, and eventual victory. There’s a human-interest story at the bottom of this bombast, but it’s hard to see the actual people through the weight of history, horror, and hagiography being piled atop them.