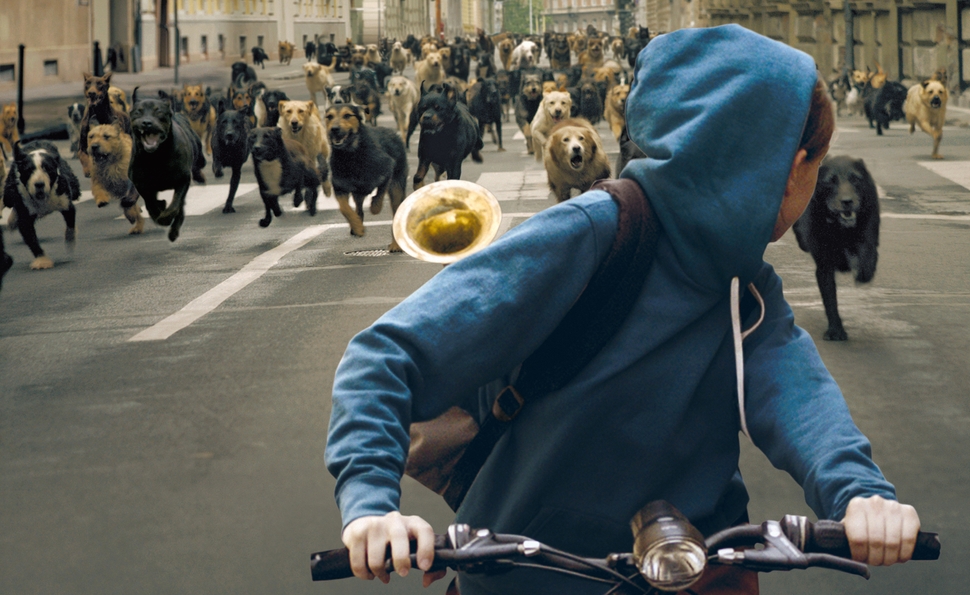 Kornél Mundruczó’s Hungarian feature White God is one exposition-delivering, morality-underlining, lab-coated professor short of being a 1950s creature feature, and has about three grisly deaths too many to be a Benji movie. But the family resemblance in both cases is clear. Part sentimental story about a girl and her dog, part grim political metaphor, Hungary’s submission for 2014’s Best Foreign Language Film Oscar (and Cannes’ Un Certain Regard prize-winner) is symbolically broad enough to be applied to majority oppression of any stripe. It’s also narrow enough to be appreciated primarily as a fairy tale. However individual viewers choose to take its meaning, though, they’re likely to be impressed by the technical accomplishment of a film featuring 274 dogs, no CGI, and a pair of canine protagonists who consistently out-emote their human co-stars.

Zsófia Psotta makes her acting debut as Lili, a 13-year-old Hungarian reluctantly moving in with her equally resistant father Dániel (Sándor Zsótér) while her mother goes to a lengthy conference. The emotional distance between Lili and Dániel is considerable, and while co-writer/director Mundruczó doesn’t fill in many blanks in their backstory, an impressionistic picture emerges of an unpleasant marriage, a contentious divorce, a long estrangement, and a father with no idea how to treat a girl just edging into puberty, or how to prevent his discomfort from mutating into anger and spite.

So Dániel focuses his frustration on Lili’s beloved dog, Hagen, first by refusing to house him, then to pay a mandatory pet-owner fee, and finally by flinging him out of a car when Lili resists dumping him at a shelter. From there, Hagen (played by two identical dogs, littermates adopted from Arizona) has episodic adventures familiar from The Incredible Journey, Jack London’s White Fang and The Call Of The Wild, and For The Love Of Benji: Exploring Budapest on his own, he looks for his owner, befriends other dogs, runs afoul of cruelty and casual betrayal, learns about death, evades increasingly militarized dogcatchers, and falls into the hands of a dogfight trainer. In the process, he learns about humanity’s profligate inhumanity, and by the time he winds up in an animal shelter, he’s acting with intelligence and deliberation. He’s like a more soulful version of the “Big Daddy” zombie from 2005’s Land Of The Dead, leading his downtrodden species to a freedom that bodes ill for the human race.

Mundruczó has said his feature functions as an illustration of income and power inequity, with the dogs standing in for any impoverished or oppressed people. He embraced the dog metaphor “because I wanted to focus freely on this sensitive subject, as freely and with the least number of taboos as possible.” But the dogs prove more specific and compelling than the symbolism. Liberated from animal shelters, trained and socialized in small groups over the course of a year, and eventually merged into the teeming mob seen on White God’s posters and in its trailer, they’re a perpetual reminder of how astonishing practical effects and real, living subjects can look in an age more inured to glossy CGI fakery. The screen teems with vitality and energy whenever the dogs return to center stage, but it’s hard to get lost in a story, or a metaphor, when the predominant question of a film is always, “How did they get those dogs to do that?”

It’s easier to fall into the film when Mundruczó turns the camera on his human cast. Lili is suspicious and protective of her emotions, and Psotta gives a buttoned-up performance that conceals as much as it reveals. But in moments where she nervously interacts with a more sophisticated older girl at band practice, or yearns in a non-specific adolescent-girl way after a casually handsome older boy, she shows cracks in her armor, and a universal vulnerability underneath. In some moments, White God is a fast-moving thriller, with the dog pack chasing a rapidly retreating camera, or evading enemies through scenes full of tense, quick editing. At other times, it’s a standard-issue slasher movie, with Mundruczó’s camera edging into darkened rooms and peering nervously around corners to find the latest bloodied victim. But when Mundruczó pushes the camera in close on Lili or Hagen, it just becomes a family drama, and a portrait of longing—for freedom, for emotional reciprocity, for comfort. As Hagen moves closer to human understanding, Lili makes more instinctive choices, and evinces an increasingly puppyish desire for simple affection. Metaphors aside, it’s an emotional experience. The dogs could well stand in for people, but the people prove animalistic as well, in good ways and bad. White God’s ultimate message is that the natural difference between species pales in comparison with the artificial differences people create between themselves.