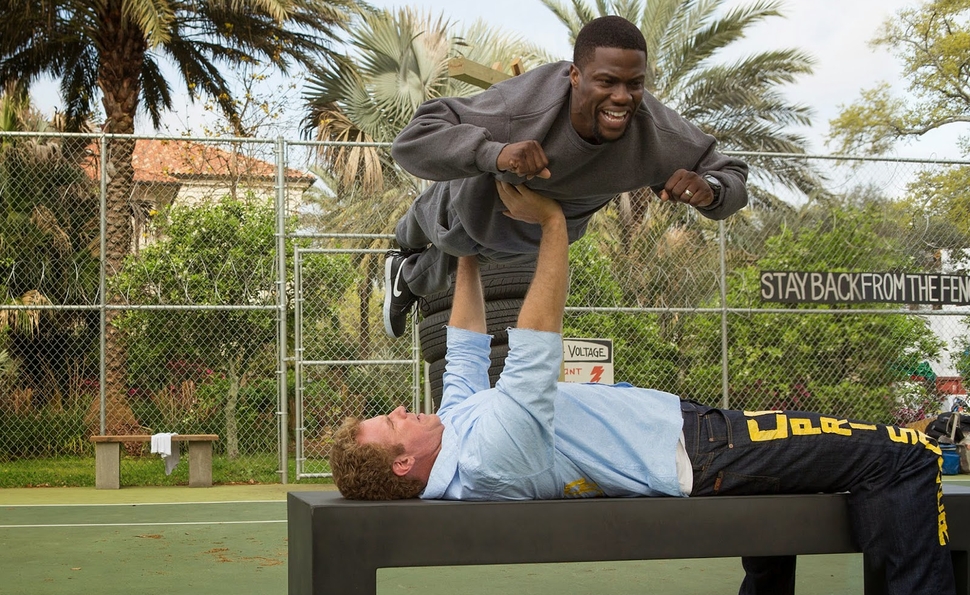 As part of Rob Schneider’s ongoing effort to sever the umbilical cord connecting him to mentor/co-star/dream-facilitator Adam Sandler, Schneider strayed from Sandler and his Happy Madison production company to star in and direct the 2007 comedy Big Stan. The widely derided Saturday Night Live alum starred as an extremely wealthy man who’s sentenced to prison, and hires an eccentric guru (David Carradine) to teach him the skills that will keep him from being violently sodomized during his time in the hoosegow. The film wasn’t a success, to put it mildly, and it skipped theaters en route to a direct-to-video burial. Now, eight years later, widely adored Saturday Night Live alum Will Ferrell runs through the exact same premise in Get Hard.

Despite their uncanny similarities, the film isn’t a Big Stan remake. No one would be stupid enough to remake a Rob Schneider movie. And to give Get Hard more credit than it probably deserves, the films do differ in structure. Big Stan is primarily a prison comedy, with only the first act devoted to anti-anal-sex preparations, whereas Get Hard is all about the 30 days leading up to the protagonist’s incarceration. Get Hard counts down the days until James King (Ferrell) is due to show up for a 10-year sentence in San Quentin, but the movie has such weird, stilted, uncomfortable rhythms that it sometimes feel like James’ 30 days of freedom are being filmed in real time, and the viewers are suffering along with him.

James begins the film as a comically arrogant master-of-the-universe type who delights in the luxuries of a charmed life, including a gorgeous fiancée (Alison Brie, badly miscast in the kind of evil-sexpot role any Sports Illustrated swimsuit model looking to branch out into acting could play), a mansion staffed by immigrant servants who barely conceal their disgust for him, and a cushy job in finance. James’ life seems too good to be true because it is. At his own birthday party, James is arrested for fraud and embezzlement (while performing alongside John Mayer, no less). Although he’s assured he’ll have to suffer nothing more than a year in a ritzy country-club prison, the judge decides to make an example of him, and sentences him to 10 years in San Quentin.

In desperation, the fallen power-broker turns to Darnell (Kevin Hart), an effete husband and father who also runs a small business, and is trying to get together a down payment on a house in a better neighborhood, so his daughter can go to a better school. In other words, Darnell is a model citizen, the kind of stand-up guy any mother would be proud to call her own. But because Darnell is black, and because he tells James that San Quentin is particularly brutal—more or less common knowledge, to the point where Johnny Cash sang a whole song about it— James assumes the nice, pleasant man who washes his car is an ex-convict with a violent past. So James offers Darnell $30,000 (the cost of a down payment on that dream home) for tips on how not to be sodomized in prison.

So is Get Hard a sly parody of white entitlement, revolving around the notion that an oblivious, unintentionally racist doofus like James assumes that even the most unthreatening black men are prison-hardened criminals? Or is Get Hard simply kind of racist, with no implied critique of its main character’s conception that black culture can essentially be reduced to dressing like Lil Wayne, drinking 40s, and cultivating an appreciation for twerking?

It could be argued that Get Hard comments on racial stereotypes by depicting the kind of black masculinity James feels he needs to harness as a form of performance in order to survive prison. It looks for humor in the way Darnell behaves the way an ignorant bigot assumes black men behave, because of what they see in movies and on television. But it requires an awful lot of dense conceptual thinking to see Get Hard as a genuine satire of race, not a Bringing Down The House-style exercise in old-fashioned stereotype-based comedy. The script assumes that as long as the white guy at the center looks and talks like an idiot, then it’s completely kosher to depict African-Americans primarily as gun-toting, weed-smoking, oversexed gang-bangers.

Get Hard was co-scripted by Etan Cohen, whose impressive résumé includes writing credits on Idiocracy and Tropic Thunder. His Get Hard co-writers, Upright Citizens Brigade co-founder Ian Roberts and his writing partner Jay Martel, have done brilliant work on Key & Peele, a show that manages the tricky, almost impossible feat of commenting irreverently on race without being racist. Get Hard is nowhere near as lucky or as skillful. Given their backgrounds, it’s tempting to give the screenwriters the benefit of the doubt, but so many of the scenes play like bad improvisation exercises, with Darnell halfheartedly running his client through preposterous jailhouse possibilities and James engaging in a particularly brutal version of make-pretend. The miscast Hart has two equally unsuccessful modes here: dispirited exasperation in family-man/life-coach mode, and hyper-stereotypical aggression when trying to be the hard-ass ex-convict his curious new employer is paying him so handsomely to be.

Get Hard establishes early on that while James is greedy and clueless, he’s also innocent, the victim of a setup. Yet the film is slow to realize that he might be better off spending his time trying to clear his name, rather than learning to how to perform oral sex on men, or properly store a shiv inside his own anus. Considering the quality of the talent involved, some of the random bits of craziness land, like a simulated riot inexplicably featuring a monkey. But the vast majority hit with a resounding thud. As Tropic Thunder and Idiocracy proved, funny excuses just about anything, but Get Hard desperately strains for bad-taste laughs it never comes close to earning. The deathly silence doomed to haunt theaters during Get Hard allows audiences far too much time to think about its problematic attitudes toward race, gender, sexuality, and class, as well as its borderline-nonsensical plot. Nobody’s going to be distracted by laughter.