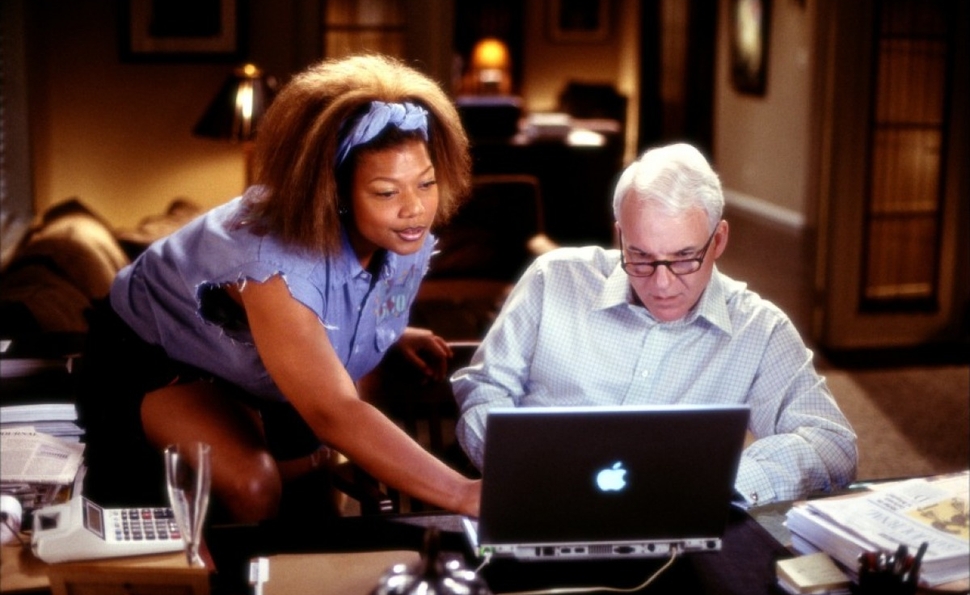 Bringing Down The House ostensibly takes place in 2003, the year it was released. But culturally, it seems to take place sometime between JFK’s inauguration and The Beatles’ first American show. That’s appropriate, since the film—which earned $130 million domestically and become 2003’s 13th-biggest grosser—is a product of Disney’s Touchstone imprint, whose comedies tend toward blandly upbeat, pop-music-saturated efforts with the look and feel of Disney’s live-action offerings from the 1960s and 1970s, the kind that starred Dean Jones and involved some manner of supernatural or animal-related hijinks. Directed by Adam Shankman, Bringing Down The House has the Touchstone comedy house style down pat: a smooth jazz score (from Lalo Schifrin), bright lighting, peppy pacing, and broad, hammy performances from movie stars typecast to perfection. It’s a race- and culture-clash comedy as bland and hopelessly Caucasian as a Yankee Candle store.

The film begins with divorced tax attorney Peter Sanderson (Steve Martin) flirting blandly with a woman calling herself “lawyer-girl” on a legal message board. Peter engages in the kind of mild deception endemic to online flirtation, making himself seem younger and less white-haired than he actually is. “Lawyer-girl,” meanwhile, engages in the kind of extreme online deception more common in the television program Catfish, sending Peter an image that implies she’s thin, young, white, and blonde. But Peter doesn’t realize “lawyer-girl” isn’t the woman at the center of the image: She’s the large, angry black woman being arrested in the corner of the frame.

Of course, no one has themselves photographed being arrested, and if they do, they certainly don’t hold on to that image and use it to attract suitors. Online, people tend to use images of how they looked on their best day, not how they looked while being arrested for armed robbery. But if not for this contrivance, Bringing Down The House wouldn’t exist, and the world would be spared a level of offensive stereotyping not seen since Mickey Rooney was fitted for buck teeth in Breakfast At Tiffany’s.

“Lawyer-girl” turns out to not be the professional Peter was expecting, but rather Charlene (Queen Latifah), who begins shouting incomprehensible slang at him as soon as they meet. Peter is mortified to discover that the white woman of his dreams is actually black, though the film is just diplomatic enough to put his extreme discomfort in terms of class, propriety, and language rather than race. The problem, the film makes clear, isn’t that Peter is associating with a black woman. If she looked like Halle Berry and wore conservative business suits, the shrill culture-clash at the film’s center wouldn’t register.

No, Peter is mortified by Charlene because she’s loud, vulgar, overtly sexual, and communicates via head shaking, shouting, and long strings of nonsensical Ebonics. She behaves in broadly stereotypical, flashy, and attention-grabbing ways instead of trying to assimilate her way into a respectable position as a paralegal, the position Peter feels she might aspire to if she really applies herself, buckles down, and stops with all that street foolishness.

Bringing Down The House later establishes that Charlene is an escaped convict on the run, rather than the ex-con she presents herself as being. Yet from the moment Charlene meets Peter, she behaves as conspicuously as possible, which extends to throwing a large party for her friends at Peter’s home. When Peter attempts to kick Charlene out of his home upon her arrival, she begins screaming things like, “You told me I was your little African queen, and I loved-ed you for that!” and taunts Peter for neglecting their nonexistent progeny, a “little chocolate-vanilla swirl from that magical night at the crack house!”

The film stacks the deck by surrounding Peter with unabashed racists and people so obsessed with propriety that they see the appearance of an uptight, suit-wearing white man like Peter alongside a large black woman as such a bizarre anomaly that it must be confronted and explained constantly. The primary exception is Peter’s friend and affiliate Howie Rottman (Eugene Levy), a skirt-chasing womanizer who gazes at Peter’s unwanted houseguest for the first time and instantly falls into a state of lust with her, to the accompaniment of “Jungle Love.” In any other film, introducing a glib interracial romance with a song called “Jungle Love” would represent a horrifying low. For Bringing Down The House, it’s pretty much par for the course, and representative of the film’s “Who gives a shit?” attitude toward issues of racial sensitivity.

The hatemongers around Peter include the racist old woman who lives down the street (national treasure Betty White); Virginia Arness (Joan Plowright), the deeply conservative potential client who has the capacity to make Peter’s career by sliding her business to his firm; Peter’s hateful professional colleague, Todd (Michael Rosenbaum); and perhaps most egregiously, Peter’s ex-sister-in-law Ashley (Missi Pyle), an alcoholic man-eater who comes the closest of all the film’s characters to actually calling Charlene a racial epithet. There’s an unfortunate tension to Bringing Down The House derived from its characters suppressing the racial epithets constantly on the tips of their tongues. If they didn’t just-barely suppress their racism, the film would be filthier and more extreme than The Wolf Of Wall Street. Instead, they constantly use phrases like “welfare-ish” and “tattooed” as euphemisms for uglier, less progressive sentiments.

That prejudice extends to Peter, who regularly talks to Charlene in ways that are condescending at best and racist at worst, like when he complains that she obviously got someone to type for her during their online flirtation (because clearly someone who uses Ebonics so extensively is incapable of writing coherent sentences). But perhaps the truest and most damning reflection of our hero’s attitude can be found in the utterly insulting way he compliments her by saying, “You obviously have pockets of intelligence. Why do you walk and talk and act the way you do?” The answer is that if Charlene didn’t behave in such a stereotypical fashion, even when it flagrantly goes against the plot, there would be no film at all. She isn’t a character so much as a kaleidoscopic array of stereotypes and clichés—some negative, some ostensibly positive, all reductive.

Charlene doesn’t just humiliate Peter in ways that constantly call attention to herself; after she calms down and cuts it with the hippety-hop sliggety-jiggy rap slang, Charlene teaches the uptight Peter how to dance by embracing the rhythms buried within his hips. (It really is as if the filmmakers are working their way through a checklist of mothballed, outdated stereotypes.) She also teaches him how to satisfy a woman by explicitly telling him to embrace his inner king of the jungle. She solves his daughter’s romantic problems by dangling a boy who got rough with her sexually off a ledge until he apologizes, and teaches Peter’s son to read by showing him porno magazines. Sure, Charlene complicates Peter’s life a little, but she more than makes up for it by permanently solving every problem this bland, uptight, ambiguously racist, unambiguously condescending white man has.

In appreciation, Peter sets about solving Charlene’s big problem by attempting to coerce a confession from her ex-boyfriend that will clear her name. This means making his way into a club where, we are informed, the only white people present are cops, corpses, or junkies looking for a fix. An uptight-looking white man like him has no business in such a place, so Peter puts on a “hood” ensemble of a gold chain, winter hat, and outsized jersey, and begins spouting long streams of gibberish slang.

Bringing Down The House treats black English not as a vernacular with specific rules and its own syntax, but rather as a foreign language it doesn’t speak, and assumes the audience doesn’t speak either. For long stretches, Bringing Down The House approaches Pootie Tang levels of impenetrability, but in Louis C.K.’s film, the obfuscation was deliberate. Bringing Down The House just thinks people “talking black” is inherently hilarious, whether or not what’s being said makes sense in context. And if that black slang is being spoken by a really white guy, then that’s just plain comic gold, which helps explain why the deeply embarrassing sequence where Peter jives his way through the nightclub just seems to go on and on and on, with each successive moment representing a mortal blow to Martin’s perpetually embattled dignity. Steve Martin is one of the most influential and brilliant comic minds in history; it is genuinely painful to watch him channel Jamie Kennedy in Malibu’s Most Wanted.

This is the film’s idiotic heart of darkness, its pointless, overly familiar, and deeply offensive reason for being. America apparently really wanted to see Steve Martin duded out like Ali G, speaking a 60-year-old white hack comedian’s conception of black English. Bringing Down The House was intent on providing this and a series of other crowd-pleasing moments that should fill the whole crowd with shame instead.

The film’s existence and success isn’t horrifying, it’s perplexing. Why did a movie this grotesque and nakedly offensive get made and distributed in 2003? Why did it become a huge hit? What does it say about our racial progress that a love affair between a white man and a black woman could be introduced to the strains of Morris Day And The Time’s “Jungle Love,” and produce only scattered titters of concern? Is there something cathartic or liberating about watching grotesque, reductive caricatures of whiteness and blackness square off in a fantasy realm devoid of consequences or real pain? Is the relationship between white and non-white people in the United States so inveterately tragic, we can only process it as broad comedy? Why did we allow Bringing Down The House to happen, and what can we do to ensure that it never happens again?

Just about the only positive thing that can be said of Bringing Down The House, and the public that made its success possible, is that history has at least been kind enough to half-forget the film, and in the process make us all feel just a little less guilty about having contributed, even a little bit, to the success of a project that implicates its audience as well as its creators.

Up next: The Toy