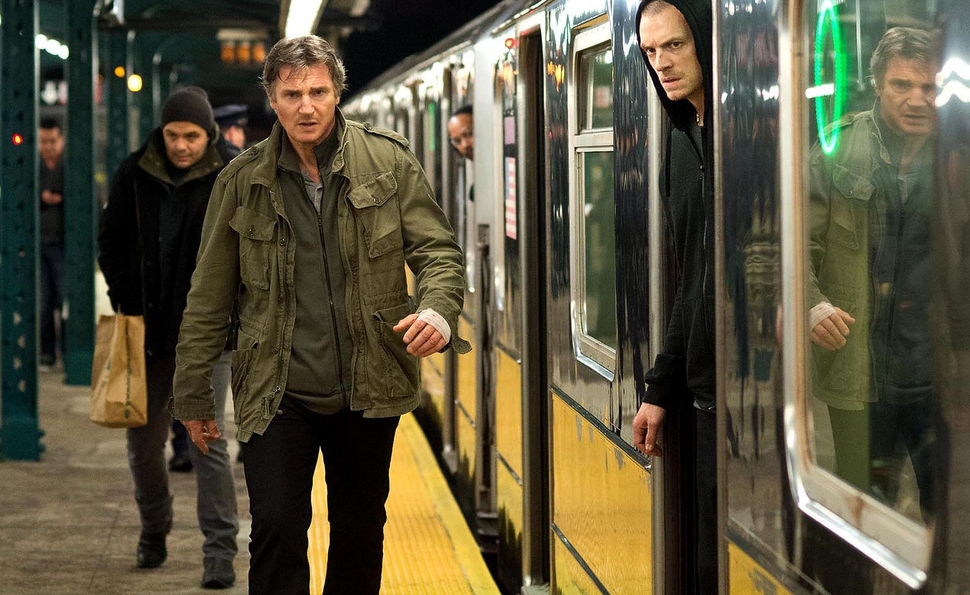 Run All Night, the latest pulpy genuflection in the Liam Neeson Stations Of The Cross, indulges the late-blooming antihero’s weirdly compelling persecution-complex/death-wish like no picture since Taken 3, back in, well, 2015. Scripted by Out Of The Furnace screenwriter Brad Ingelsby, and directed by Catalan thrillermeister Jaume Collet-Serra—who previously teamed with Neeson on the crappy Unknown and the surprisingly adroit Non-Stop—it gives the Oscar nominee another crack at the self-flagellating persona he’s perfected over the course of eight (give or take) Lethal Martyr flicks since Taken in 2008. Wouldn’t it be something to see him in an action picture where he gets to have Roger Murtaugh’s happy marriage for change? Has his agent ever pitched him for, say, Professor Henry Higgins in a Rob Marshall-directed remake of My Fair Lady?

That would be a waste of natural resources, because Neeson does Grief-Stricken And Merciless even better than he does Avuncular And Comforting. His Run All Night character is at rock bottom—like his alter egos in The Grey and Non-Stop, two high points in this bizarre cycle. Jimmy “The Gravedigger” Conlon is a broken-down, drunk-all-day former button-man for his boyhood pal Shawn Maguire (Ed Harris, as steady a hand as Neeson is), who climbed the management rungs of organized crime while Jimmy stayed in the trenches. It’s been decades since Jimmy pulled a trigger, or was of use in any other capacity. His wife is dead, naturally; his grown son, Michael (perennially bloody-faced Joel Kinnaman)—a former boxer who ekes out an honest living for his family by driving a limo—wants nothing to do with him. Shawn appears to keep Jimmy around for purely sentimental reasons. Early in the film’s admirably unhurried first act, Jimmy is reduced to begging Shawn’s coke-snorting hothead scion for a loan so he can fix the heat pump in his house. He also reveals that his Very Particular Set Of Skills does not include successfully impersonating Santa Claus for a discerning crowd of 6-year-olds.

Through a series of convolutions too silly to dwell on, Jimmy’s son, Michael, witnesses a murder committed by Maguire’s men. As Jimmy and Shawn both feel a drive to protect their offspring that overrules their mutual brotherly affection—and because Shawn has enough cops in his pocket to make calling 911 a bad idea—Jimmy and Michael must go on the lam while trying to prevent Shawn from killing Michael’s wife and daughters. Oh, they’re also trying to protect “Legs,” the fatherless tween Michael trains at the boxing gym. There’s a lot going on in this movie. But all that texture turns out to be a virtue.

Jimmy is so old-school he still uses a revolver, an indulgence that requires him to reload three times as often as the various constituencies (dirty cops, regular cops, mob soldiers) trying to plug him. Refreshingly, the film resists the Father Knows Best/Old Ways Are Best subtext so common to the recent crop of geriatric shoot-’em-ups, even as it leans into the clichés of much older crime pictures.  Jimmy understands there is nothing of value his son can learn from him. He just wants to keep him alive and out of jail.

Collet-Serra is no prodigy with physical action. The movie’s biggest setpiece, wherein Jimmy and Michael must escape a housing-project tower where they’re being hunted by cops and assassins, starts off promisingly enough, then descends into unintentional chaos. Though it’s annoying when Collet-Serra resorts to an instantly dated, computer-assisted swoosh-cam effect to show where one set of characters are in the five boroughs in relation to another set, the picture elsewhere exudes an appealing timelessness. Save for some minor business involving a cell-phone camera, and the JumboTrons in the background when Jimmy eludes pursuers by blending into a throng of hockey fans pouring out of Madison Square Garden, the movie could be set in 1975, or 1935.

An impressive “Hey, it’s that guy” club rounds out the margins: Bruce McGill, playing Shawn’s aide, probably thought he’d at least get a line or two when he signed up. Vincent D’Onofrio is persuasive in his handful of scenes as a homicide cop with a long list of bodies he never managed to pin on Jimmy—someone who can see, without sympathy, that Jimmy is being eaten alive by the guilt of all the lives he’s taken. There’s even a cameo by the one living film actor who can still out-growl Liam Neeson.

The only real misstep is Common, currently also onscreen as the civil-rights leader James Bevel in Selma. His terse, high-tech hitman character seems to be belong more to a low-rent Terminator knockoff than to the low-rent Godfather knockoff this turns out to be. His laser-sighted pistol, shaved head, scarred features, and glowing green night-vision eyepiece all make him look uncannily like Deathlok, among other minor Marvel characters.

That might not be accidental: With its steaming manhole covers and rumbling el trains, its fatherly lessons administered in the sweaty confines of a boxing gym, and its overwhelming sense of grim fatalism, Run All Night turns out to be at least as reminiscent of Frank Miller’s hard-boiled early-1980s run on Daredevil as Netflix’s upcoming Daredevil series (also starring D’Onofrio) is likely to be. If Martin Scorsese, who is set to direct Neeson in The Silence, had shot this script, it might’ve been a masterpiece. As things lie, it’s just a slightly above-average chase flick directed by a Catalonian and starring an Irishman and a Swede as a pair of New Yorkers trying to survive. Nothing could be more American.