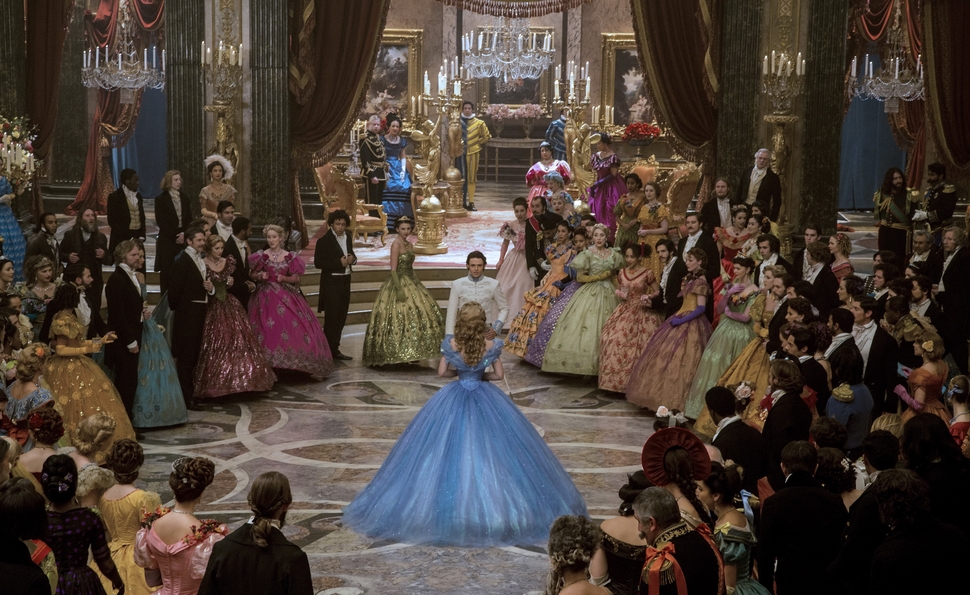 With last year’s Maleficent and the ongoing ABC series Once Upon A Time, Disney has recently displayed a tentative willingness to explore the (slightly) darker side of some of its most lucrative existing properties, to extremely profitable ends. At the same time, its animated sector has worked, little by little, to diversify and expand the company’s ever-marketable roster of Princesses (TM), from The Princess And The Frog through Tangled, Frozen, and presumably the upcoming Moana. Disney has been trying to find more complexity in what transpires between “Once upon a time” and “Happily ever after,” at least to the extent that it can, as a company with fairy-tale primitiveness wired into its DNA.

But with its new live-action Cinderella, Disney more or less time-travels back to 1950. Though the credits would have viewers believe this Cinderella is based on the Charles Perrault fairy tale, it actually looks to Disney’s 1950 animated feature for most of its inspiration, right down to the names of Cinderella’s mouse friends, and the colors of the dresses worn by Cinderella’s evil stepsisters. Though it runs significantly longer than the animated version—despite having no real musical numbers to speak of—this new Cinderella tells more or less the same tale with little variation in terms of story (fair enough), tone (problematic), or characterization (very problematic).

Downton Abbey’s Lily James takes on the title role, though she begins the film as simply Ella, the beautiful, adored—really, really adored—only child of a successful merchant and his lovely (no other qualities listed) wife. Together, the three of them live a life of beautifully lit, CGI-assisted bliss in the countryside of an unnamed tiny kingdom that seems to exist somewhere between 17th-century France and 1940s England. When Ella’s mother (Hayley Atwell) dies of an unnamed illness, leaving her with a trite final lesson—“Have courage and be kind”—that the film adopts as its central moral, Ella is doted on even more by her father (Ben Chaplin), even once he eventually remarries. Enter the fabulously adorned Lady Tremaine (Cate Blanchett) and her two crass daughters, Anastasia (Holliday Grainger) and Drisella (Sophie McShera), who bring the doting to a firm halt once Ella’s father dies while on a business trip.

The biggest concession this Cinderella makes to modern sensibilities is introducing its heroine to her Prince Charming before the kingdom-wide ball at which he must choose a wife. The first meeting between Ella and the prince (played with toothy blandness by Game Of Thrones’ Richard Madden), occurs in the woods near her home, where the two engage in some sweet horseback flirtation that’s the closest their relationship ever comes to resembling an actual romance. And though it introduces some unnecessary obfuscation—the prince conceals his extremely obvious identity, telling Ella he’s an “apprentice” at the palace—it does provide the couple with an origin story beyond “He saw her at the ball and thought she was pretty.” It’s still love at first sight, but at least the Prince sees Ella for the first time as she really is—sweet, cheerful, slightly grubby—rather than under a magical spell.

But that magical spell eventually arrives, as it must, at the hands of Ella’s fairy godmother, played by a blindingly bedazzled Helena Bonham Carter. And so it’s off to the ball in a pumpkin carriage. Though Chris Weitz’s script adds some perfunctory intrigue in the form of a duplicitous Grand Duke (Stellan Skarsgård) who conspires with Lady Tremaine to keep the prince from being with his true love, Cinderella hits all its expected marks—midnight flight, lost slipper, kingdom-wide podiatric investigation—like the good little brand extension it is.

But while he’s bound by a moldy-at-best screenplay and a heroine whose greatest act of rebellion is singing softly to herself when she isn’t supposed to, director Kenneth Branagh at least injects some visual verve to the proceedings—though the gaudy “French Renaissance by way of Studio 54” aesthetic he’s chosen may not be to the tastes of viewers over age 12. (Make no mistake, this kid-friendly Cinderella is not attempting to court adult audiences in any way.) While Blanchett stands as a pillar of sartorial fierceness throughout the film, most of Cinderella’s costuming and production design takes a “glitter first, taste second” approach that embodies the film’s cotton-candy style of filmmaking: a heady sugar-rush in the moment, but empty and a little nauseating over the long haul. Only a handful of well-realized scenes, like Ella’s mad rush to beat her midnight deadline, which Branagh stages like a high-stakes chase sequence, add some heft to this gaudy bauble of a movie.

But ultimately, Cinderella is undone by its pronounced lack of interest in updating its heroine, the doormattiest doormat in the Disney Princess stable, whom James plays with a cavity-inducing sweetness that fails to translate to anything resembling depth. Of the cast, the only standouts are Blanchett—and that has more to do with her fashion-editorial presence than the rote baddie she’s portraying—and Carter, whose dotty one-scene appearance accounts for at least two-thirds of the film’s humor. (Though some of that should be deducted for her teeth-gnashing rendition of “Bibbidi-Bobbidi-Boo,” which plays over the film’s closing credits.) Both women do what they can with roles that were seemingly realized as costumes first, characters second. But like everything else in the film, they’re overshadowed by the disco-ball maximalism that defines this so-called “modern” Cinderella. It offers a lot to look at, but little to remember.

Note: Cinderella screens with the short “Frozen Fever,” which appropriates all the most memorable moments and lines from Frozen into a slight little story-song centered on Elsa (Idina Menzel) laboring to provide the “perfect birthday” for her sister Anna (Kristen Bell), despite a cold that causes Elsa to sneeze little sentient frost-beasties into being. Jonathan Groff’s Kristoff and especially Josh Gad’s Olaf the snowman also contribute to the “You may remember me from such films as Frozen” vibe. But the majority of “Frozen Fever” is turned over to a song called “Making Today A Perfect Day,” written by Robert Lopez and Kristen Anderson-Lopez, the Oscar-winning team behind “Let It Go.” Despite containing a blatant lyrical reference to that inescapable song, “Perfect Day” is a merely serviceable ditty, never really latching into a memorable hook, but playing up the sisterly affection that was Frozen’s biggest asset. For those still suffering from Frozen fever—or with children with the ailment—“Frozen Fever” offers a brief reprieve, but it’s a temporary fix at best.