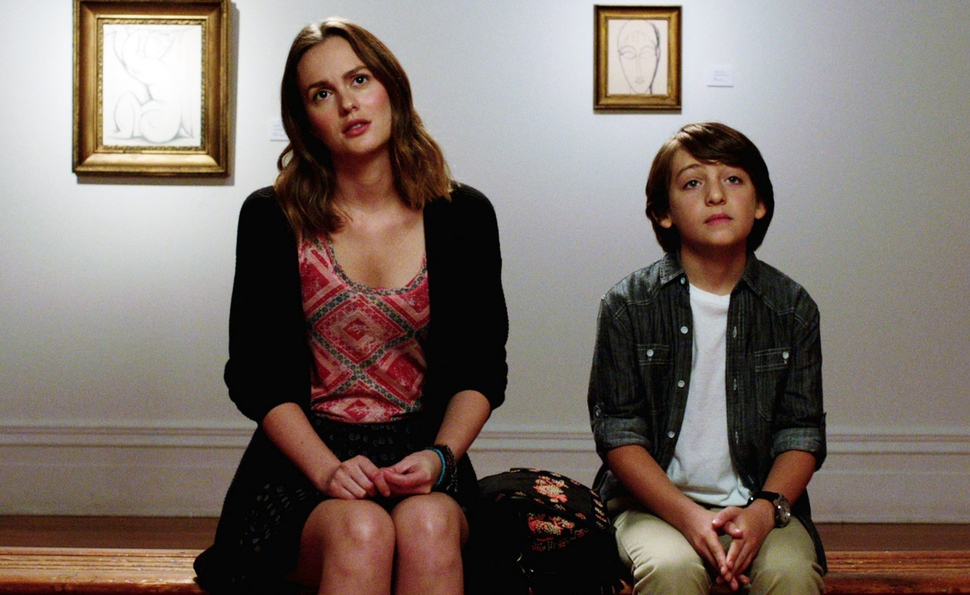 Leighton Meester’s post-Gossip Girl forays on the big screen have been a mostly mixed bag, with a motley series of roles in big studio films like Monte Carlo (for the teens), Country Strong (for the country music lovers), and That’s My Boy (for the Adam Sandler apologists), but she’s has also made time for indie offerings, like last year’s underseen Life Partners. That film is still the best example of what Meester can do—basically, just be really charming—when given the right material, and though the actress’ latest indie attempts to play up that same relaxed charisma, the feature around her is dire.

Like Sunday, Like Rain treads on familiar ground, functioning as an unexpected remake of Uptown Girls, if someone decided that what Uptown Girls really got wrong was not making everyone involved with it extremely depressed and mostly intolerable to be around. Director Frank Whaley—best known as an actor, though this is his fourth go-around behind the camera—casts Meester as Eleanor, a bottomed-out Manhattanite who just can’t seem to get anything in her life right. We know Eleanor can’t get anything right because she doesn’t even have a box spring for her bed, a dunderheaded observation that’s delivered before we even learn her name.

Our introduction to Eleanor is juxtaposed with our first glimpses of young Reggie (Julian Shatkin), who’s undone in equal but opposite measure. Reggie lives a rarefied but impersonal life in a giant apartment on the Upper West Side, spending much of his time complaining about the food and talking with elevated vocabulary. Just 12 years old, Reggie has been raised by nannies for most of his life, and when we first meet him, a no-nonsense maid is rousing him for the day. That’s still better than his mother, Barbara (Debra Messing), who screeches and screams around the house at all hours, only interested in berating the help and getting more wine into her body.

In the immortal words of The Breakfast Club, both Reggie and Eleanor have unsatisfying home lives. Through a series of contrivances, Eleanor becomes Reggie’s short-term (with potential) nanny, landing the gig simply because the woman who runs the temp service that Barbara uses can’t be bothered to check personal references. Eleanor and Reggie warm to each other, but it’s unfortunate that Whaley keeps them apart for nearly the film’s entire first act, instead spending a big chunk of the runtime introducing us to their obviously unhappy lives and the horrible people who populate them.

Barbara is no prize, and Messing plays her in such broad strokes that it’s difficult to ascertain if there is any humanity underneath all that yelling and if Whaley even wants us to see shades in his supporting character. Worse still is Billie Joe Armstrong—yes, Billie Joe Armstrong from Green Day—as Eleanor’s inevitably jerky boyfriend, whose performance consists of screaming things like, “I’m a fucking musician!” and, “I wrote a bunch of songs about you!” and throwing things on the ground like a petulant child. It’s no wonder that Eleanor would end up taking care of an actual petulant child, considering her rich experience in the field. At least Reggie has a leg up when it comes to being age-appropriate, though that’s about all that can recommend him.

Reggie is insufferable and picky and way too smart for his own good, and his behavior appears to be engineered for maximum on-screen drama. The precocious-kid thing has been done to death in movies, but Reggie would be grating and snobby even if he were twice, even three times, his age. At one point, he calls Eleanor “kid” and the effect is one close to revulsion. Shatkin is trying hard here, but Whaley’s overwrought script keeps the young actor from utilizing his charm; Reggie is simply difficult to be around, even as Meester’s Eleanor is expected to act charmed by all his quirks and issues.

The film’s repetitive and dour score doesn’t help matters much, and it’s played so often over scenes that would benefit from actual dialogue that it quickly scans as a cop-out, one done to cover up a thin script. Reggie and Eleanor eventually come to bond over music—Reggie is both math whiz and a cello prodigy, Eleanor’s big secret is that she used to be a musician, too—but Like Sunday, Like Rain is so out of tune that even those late-breaking attempts at emotion can’t strike a chord.