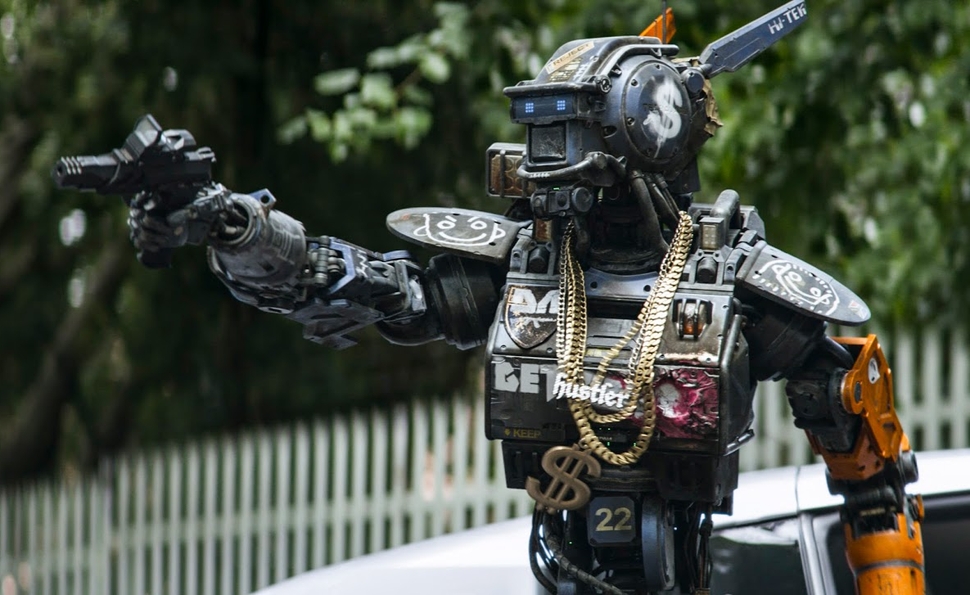 There are far too many things going on in Chappie, and one of the main extraneous ones is the roaring mega-thug Hippo (Brandon Auret), who somehow runs a significant crime syndicate even though he seems incapable of communicating anything except “I want that!” over and over. He’s a heavily armed toddler with tattooes, and he heightens the film’s camp tone considerably.

But the real problem is the way the third act disintegrates, when Vincent sabotages Dion’s cop-bots, throws Jo-berg into burning chaos, secures Michelle’s permission to fire up his war-bot to save the day… and then just focuses on using it to kill Dion, Chappie, Hippo, Ninja, and everyone around them. Tetravaal apparently has the world’s worst security: Dion can routinely hustle robots and robot parts in or out of the factory. Vincent pulls a gun on golden boy Dion and violently assaults him in front of other co-workers, then strolls back to his cubicle without consequence. Vincent disables Dion’s entire system (from Vincent’s own dedicated terminal in his own lab, so it isn’t like he’s doing much to cover his tracks, beyond hitting the “delete virus” button afterward) without detection or any subsequent investigation. Michelle doesn’t even bother to supervise his use of what amounts to a flying murder-tank with more weaponry than South Africa’s military.

But on top of everything else, apparently Tetravaal has no screening process to weed out frothing, psychotic, openly vendetta-driven meglomaniacs. All this makes Chappie’s last act seem nonsensical enough to border on gibberish. Sigourney Weaver’s character is meant to be short-sighted and maybe not too bright (which doesn’t come across, because she’s Sigourney Weaver) but even so, it’s beyond belief that she does not, for even a single instant, suspect that the guy who openly hates Dion and has been angling for his downfall might have something to do with Dion’s robots all mysteriously ceasing to function. It doesn’t even occur to her when Vincent comes running around saying “Look, his robots broke, can I do absolutely anything I want with mine now? Maybe go kill him with it a little?”

Couple that with the rushed business with Chappie casually discovering the elemental nature of consciousness (which is apparently absolutely no different, in form or execution, between human brains and a robot brain, since the same neural helmet and primitive download program works on both), and the film gets very strange toward the end. Again, there are Biblical elements in the way Chappie’s creator Dion takes on a robo-body himself—by the time that happened, I was expecting that robot to sacrifice himself to save Chappie, preferably with some of the blatant crucifixion imagery movies love—but the film just blows by the idea of consciousness transfer, resurrection, and whether anyone considered, even for a moment, just getting Dion to a hospital to treat his gunshot wound. Chappie has so many great ideas, many of them borrowed from other films, but still well worth mining for fresh new angles. It just doesn’t engage with any of those ideas. It’s about as considered and philosophical as a street-corner preacher screaming out disjointed views about salvation, and shrieking over anyone who dares to interrupt.