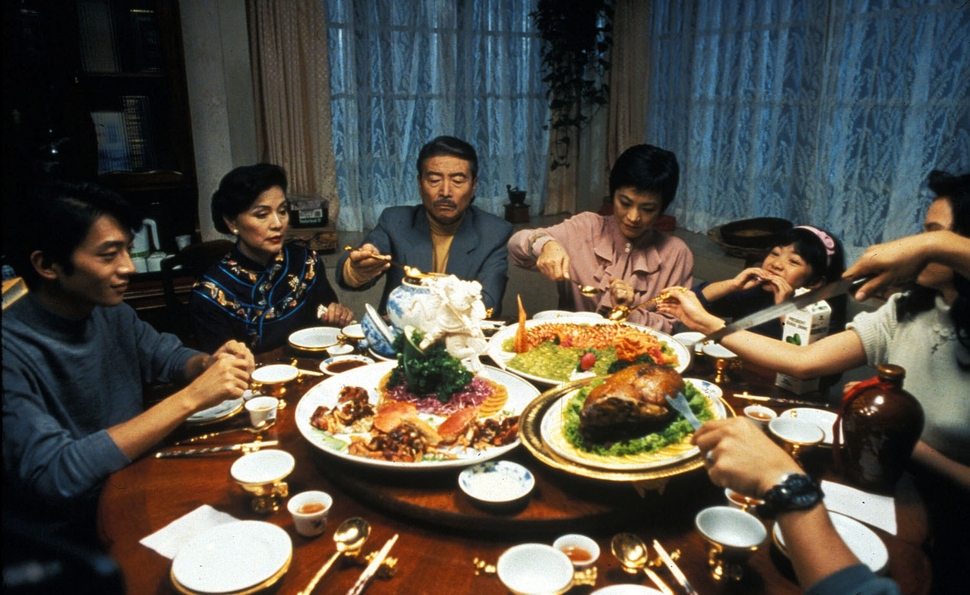 Before Ang Lee was well-known enough for “an Ang Lee film” to have meaning, his third feature, Eat Drink Man Woman, arrived in the United States as another in a line of crowd-pleasing foreign-language movies about food. Tampopo, Babette’s Feast, Like Water For Chocolate… For a time in the 1980s and 1990s, the best way to reach an arthouse audience was through its stomach. And Eat Drink Man Woman could boast some exquisite food-porn. The main character, Mr. Chu (Sihung Lung), is an aging master chef who’s been losing some of his faculties, but still prepares elaborate dinners for his friends and his three grown daughters. Over the opening credits and throughout the film, Lee marvels at the complexity of Mr. Chu’s cooking, showing every step in the process as he minces, smokes, fries, boils, blanches, rolls, rubs, and pinches. Even if Eat Drink Man Woman had no plot, it’d be a pleasure to watch.

As it is, the movie’s plot is fairly slight and episodic—like two or three episodes of a TV family drama yoked together. Lee and his frequent screenwriting collaborators, James Schamus and Hui-ling Wang, build the story around Mr. Chu, but most of the action involves his children. Jia-Jen (Kuei-mei Yang) is a prim schoolteacher who’s immersed herself in Christianity to get over a recent breakup. Jia-Chien (Chien-lien Wu) is a headstrong businesswoman juggling men while making plans to move far away from home. And Jia-Ning (Yu-wen Wang) is a student and part-time fast-food fry-cook who’s in the process of stealing her best friend’s mopey pseudo-intellectual boyfriend. Each of these characters is keeping secrets from the others—some inconsequential, some major—because each thinks they know how their family would react if they found out how much of a difference there is between who they pretend to be and who they really are.

That subtle study of petty human duplicity and hidden desires fits Eat Drink Man Woman into Ang’s filmography, including The Wedding Banquet; Sense And Sensibility; The Ice Storm; Crouching Tiger, Hidden Dragon; and Brokeback Mountain. (And heck, even Hulk.) Lee has worked in a variety of genres over the decades, and has employed different visual styles depending on the material. Aside from the loving shots of delicious Chinese dishes and some dynamic camera moves when Mr. Chu is working in a huge banquet kitchen, Eat Drink Man Woman sticks to an unfussy mise-en-scène, emphasizing the people and where they live and work. What makes this a Lee film—and one of his best—is how well he and his co-writers understand all the relationships, and what’s going unspoken.

In Eat Drink Man Woman, the real conflict isn’t between the daughters and their father, but between tradition and modernity. Lee shows a Taipei that in some ways is indistinguishable from any major American city, where the toy store is stocked with Disney products, the young people eat at Wendy’s, and the streets are teeming with busy folks. The question the movie asks—and its title answers—is what all these people want.

The big twist is that as much as the three women talk about how they yearn to be free of their taciturn, conservative dad, all of them are in some way bound to the past. They remember when Mr. Chu was sweeter and funnier, and reminisce about watching him in the kitchen, adding personal flair to every sprinkle of salt and splash of hot oil. The characters in Eat Drink Man Woman are all lost in their own heads, unable to let each other finish a thought, because they’ve spent so much time together that they’re (mistakenly) sure of where every conversation is headed. What brings them together over and over is food, piled onto a dinner table by a man who expresses his affection through his cuisine. “My memory’s in my nose,” Jia-Chien says at one point, as she almost admits what she and her sisters can’t say—that they want to be independent, but they also want dad’s dumplings to taste exactly they way they did when they were kids.

Olive’s new Blu-ray edition looks tasty, but doesn’t come with any side dishes.