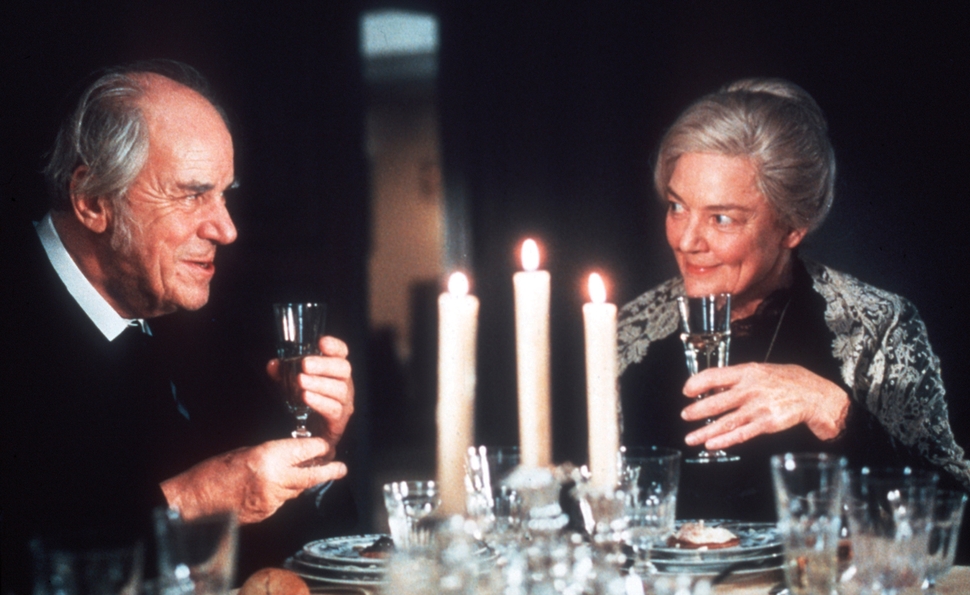 Films about food are almost always secretly about sensuality, art, or both. Big Night, Tampopo, Like Water For Chocolate, Chocolat, Ratatouille… all of them are about what cooking expresses about the chef, and how the pleasure of superlative food opens people to powerful emotions, sometimes a little against their will. In Gabriel Axel’s Best Foreign Language Film Oscar-winner Babette’s Feast, a single meal heals decades-old resentments, stands in for romance, and validates an artist whose life has been destroyed. Great food, the film suggests, has a transportive power that insinuates its way past long-entrenched beliefs, and can transcend religion, love, and will.

The film follows two timelines. In the mid-1800s in a small Lutheran Puritan colony in Denmark, two young women piously tend to their father, a minister who graciously receives their suitors, while warning that anyone marrying his daughters would be robbing him of his hands. Still, each of the girls has a single significant relationship with a doting outsider: The older, Martine (Vibeke Hastrup), with a handsome Hussar (Gudmar Klöving) banished to live with his stern aunt as punishment for his gambling and drinking, and Filippa (Hanne Stensgaard) with French opera star Achille Papin (Jean-Philippe Lafont), who is transported by her singing in church and begs to tutor her. But both women quietly shut down the men pursuing them, and both men retreat, humbled and grieving.

Thirty-five years later, Martine (now played by Birgitte Federspiel) and Filippa (Bodil Kjer) have devoted their lives to tending their father’s tiny flock of wizened villagers, and trying to keep the peace as petty, ancient squabbles re-emerge. Then M. Papin re-enters their lives via a letter begging them to take in distraught French expatriate Babette (Stéphane Audran), who lost her husband and son in the Communard rebellion, and was forced to flee France. Eager to remake her life, she works without wages, meekly helping the sisters feed and comfort the poor. After a sudden windfall, though, she insists upon making them and their friends a single glorious French meal. By coincidence, the Hussar, Lorens, now a highly decorated general (and now played by Ingmar Bergman favorite Jarl Kulle), is visiting his aunt, and joins her for the extraordinary experience.

A significant chunk of Babette’s Feast is devoted to Babette’s near-silent, elaborate process in the kitchen and the Puritans’ silent appreciation of the food, which has given the film a reputation as the ultimate food-porn experience, both because the meal looks so succulent and because it stands in contrast to the sere, severe hour leading up to it. Writer-director Gabriel Axel closely based the film on a short story by Karen Blixen, writing under the pen name of Isak Dinesen; the prose version is lean and lacking in emotion, and the film follows suit. The narration spelling out the story seems designed to let the cast members completely contain their visible emotions; in an environment this repressed, Babette’s subtle flicker of distaste over a local glop called “bread-and-ale soup” is the equivalent of a weeping fit. 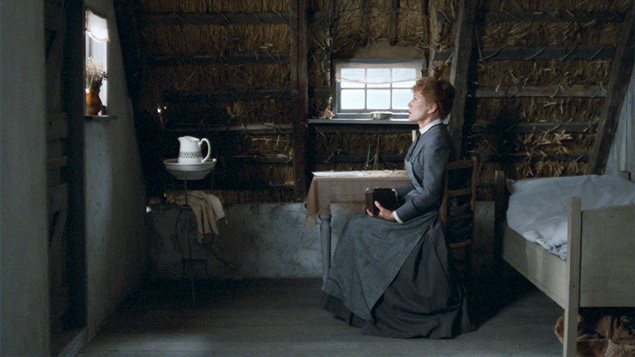 Babette’s Feast isn’t an expressive or giving film; it’s sleepily paced, drained of color, visually austere in the spirit of Carl Dreyer or Ingmar Bergman, and full of characters who express fury and delight alike in low, polite voices. It’s fundamentally about the rejection of earthly pleasure and passion, and Axel seems determined to put his viewers in the mindset of his characters, in a world with no hint of lushness or comfort. The narrative is also about the emptiness of most pursuits: General Lorens is dissatisfied and confused after devoting his life to a spectacular career. The Puritans are bitter and judgmental after devoting their lives to religion. Martine and Filippa find satisfaction in devoting their lives to their father, but are left bereft after his death, watching the consensus he built crumble.

The M. Papin subplot is a striking few moments of energy and tension in the middle of all the tasteful, self-negating restraint. A sequence where he teaches Filippa a pointedly relevant duet from Don Giovanni—with Don Giovanni attempting to seduce Zerlina away to great things, while she recoils from the strength of her joy and desire—evokes all the aching emotion that the rest of the film denies. In a film so much about art, Filippa’s eventual rejection of her talent is a misery, but it also underlines the specificity of the message: Neither her unexpressed talent nor M. Papin’s fame bring happiness, or counteract loneliness and the search for meaning. Only Babette finds a rich, unbending version of contentment, through her choice to sacrifice everything for one last artistic creation.

While Babette’s Feast is bleak, and often ponderous and stony, it eventually resolves as a moving hymn to art. Through the magic of Babette’s meal, the church’s lingering conflicts and Martine’s unfulfilled romance find closure—but Babette’s satisfaction isn’t based on that outcome, or on any praise from her guests, who worry that the food will offend them, and make a pre-meal vow to remain grimly silent about her cooking, no matter what. (In the film’s one gentle bow to humor, Lorens isn’t aware of their agreement, and he’s baffled when he fulsomely praises the food and wine, only to be met with scripture, or banal comments about the weather.) Her take on the matter is a rallying call for all artists in all fields, including filmmaking: True artists, she says, just want the opportunity to do their best work. If they achieve that, the world’s reaction doesn’t matter.

The Blu-ray includes a booklet containing Blixen’s original story and a short but informative essay by frequent Criterion film commentator Mark Le Fanu, discussing the film’s choice of language and locale, and contextualizing it among Scandinavian films of the era, and via Axel’s personal history. Most of the other features are new to this disc. One sprawling, entertaining 17-minute featurette has author Priscilla Parkhurst Ferguson analyzing the film in terms of French cooking and culture: what food means, how the film treats it visually, even how it sounds. Her insights are more creative and natural than the ones in “Table Scraps,” Michael Almereyda’s mildly stuffy 26-minute “visual essay,” which separates its wide-ranging topics via a numbered list. The many pictures and even a little video from Blixen’s life are intriguing, but the combination of still photos and Lori Singer’s stiff offscreen reading of Almereyda’s essay makes the whole thing feel like watching a professor’s slide show while he reads his dissertation.

In two straightforward, French-language talking-head interviews, Audran (24 min.) and Axel (8 min.) discuss the film in detail; Audran dissects her character and praises Axel as a precise, exacting director who was nonetheless easy with his actors. For his part, Axel discusses his joy in working with several of Dreyer’s actors, the use of Vermeer’s muted artistic palette, and the Danish Film Institute’s initial take on Blixen’s story: “There isn’t one full day of shooting in this crap!” The one archival extra is a 90-minute 1995 Danish documentary, Karen Blixen—Storyteller, an exceedingly dry and snoozy look at a startlingly colorful life.