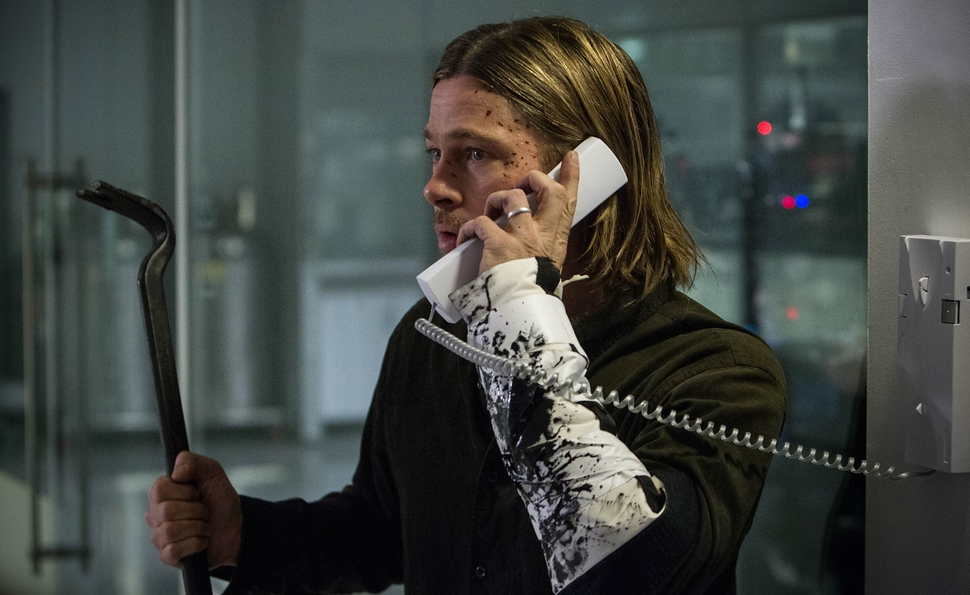 Like so many fantasy-based metaphors, zombies have a lasting emotional lure, even though they don’t make any real-world sense. They don’t have to: They’re too perfect and flexible a symbol, for everything from mindless consumerism to secrets that refuse to stay buried, and they’re an ideal narrative inroad for action-fantasies where the survivors have open license to take anything they want, and kill nearly everything in sight. The same dynamic operates on a larger scale with Paramount’s World War Z: The film doesn’t hold together in any rational way, but it still has a lingering emotional power.

Max Brooks’ bestselling 2006 novel World War Z went through many iterations on the way to the screen, and the book and film now have almost no specifics in common, apart from the idea of massive zombie outbreaks occurring simultaneously around the world, stymieing government containment attempts. The film was notoriously troubled, with the footage of a climactic battle in Russia eventually scrapped in favor of a smaller-scale, more intimate final act written by The Cabin In The Woods’ Drew Goddard and Lost’s Damon Lindelof. The reshoots delayed the film’s release by six months, and the completed film feels like it’s been through too many hands and too many versions; it’s painfully wandering, with no strong throughline. While there’s a potential connection between the book’s globe-hopping vignettes and the way the film sends U.N. investigator Gerry Lane (Brad Pitt) around the world in search of answers and a cure, the script lurches thoughtlessly between goals and tones like it’s been bitten by a zombie itself.

Every goal Gerry develops along his slapdash National Treasure-style quest quickly becomes untenable: His attempt to get his family to safety is taken out of his hands, an early protection detail ends with a whimper, and a MacGuffin hunt rapidly falls apart. If Gerry were better realized as a person, or given time to feel the impact of constantly losing his battles, World War Z might mine pathos and tension out of his heroic attempts to keep fighting and rejoin his family. But Gerry stops being a person and starts being a plot device early on, and the film’s shifting focus about what’s important just seems distracted. When he finally finds answers about the zombie crisis that he potentially could have found at home, the film’s repeated cycle of travel and bloodshed becomes not just exhausting, but empty.

Still, empty thrills can be effective. Director Marc Forster has received most of the blame for World War Z’s production problems, in profiles calling him inexperienced with CGI effects, due to his focus on relatively smaller pictures like Monster’s Ball and Stranger Than Fiction, or inept with action, based on the lack of unanimous praise for his 2008 James Bond outing Quantum Of Solace. But while it’s true that WWZ’s close-up action is often visually incoherent and disorienting, the big setpieces are terrifying—particularly the early scene where Pitt shepherds his wife and children through Philadelphia during an outbreak. That sequence turns an open-air setting into a claustrophobic nightmare, where panicked people try to flee to safety without any sense of where or even what the threat is. 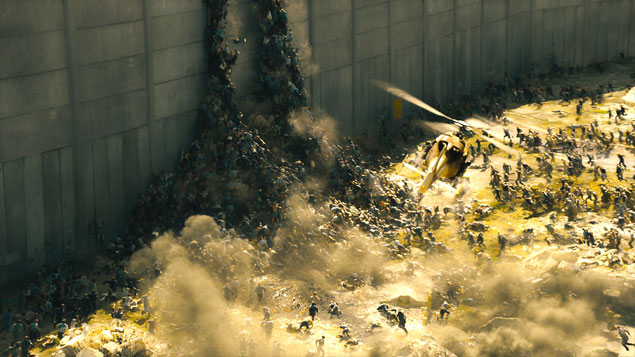 Later scenes turn the undead into a literal zombie tsunami, a wave with its own overwhelming weight and pressure. The approach—and the low gore level that earned WWZ its PG-13 rating—makes WWZ a natural-disaster movie, de-emphasizing zombies as individual dead humans, and turning them into an even more implacable and faceless force. In its best moments, World War Z outdoes every film since Steven Spielberg’s 2005 War Of The Worlds at capturing how terror turns individual people into an unthinking mass. There’s little sense of the higher causes Pitt (who also produced) originally saw in World War Z, his “Trojan horse for sociopolitical problems.” But Forster does achieve his less-complicated goal of showing how much frightened people have in common with zombies, and finding a parallel to both in swarming insects, destroying everything in their path.

Still, the film’s most poignant and powerful moment comes entirely outside of the action. After a dizzying chase sequence, Gerry steps away from his family and balances precariously on a rooftop ledge, counting down the seconds that will decide whether he can rejoin his family without hurting them, or whether he’s been infected and needs to take the plunge to the ground below. In that brief moment, at least, his emotions are relatable, his goal is important, and his choices are meaningful. World War Z could use more of that clarity, and less time spent at war with its own agendas.