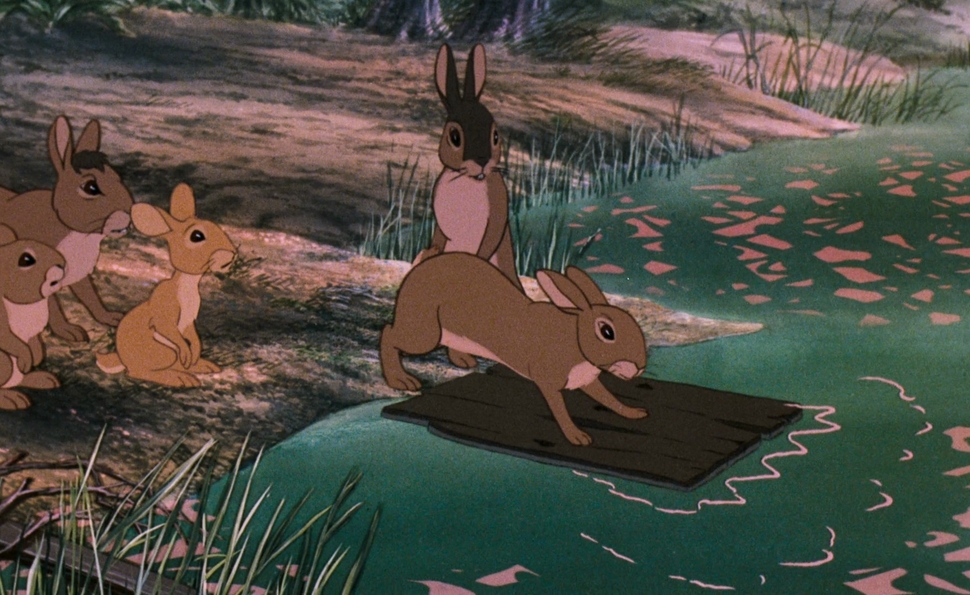 From the first paragraph onward, Richard Adams’ bestselling 1972 novel Watership Down politely indicates that it isn’t meant for children. Though it’s a fable-like fantasy about talking bunnies on a quest, it’s written with a rich, sophisticated prose style, and it takes a deep, adult fascination with environmental detail: the specifics of wildflower growing seasons, actual animal behavior, and real-world geography. Martin Rosen’s 1978 animated adaptation, on the other hand, begins with less of a warning about its content. In the biggest opening-scene fake-out until Team America: World Police, Rosen opens with a stylized, cartoony rabbit origin myth that famously failed to tip off parents that this was a graphically bloody grown-up movie, not a kiddie fairy tale.

For a few minutes, Watership Down does look like a children’s cartoon. Then Rosen pulls away from the story-in-a-story, and enters an Adams-inspired, sophisticated world of naturalistic animation, brought to life with all the realism he and his team could manage. It’s the work of a director deeply enamored of his source material, and determined to do right by it, even if it means frightening kids, baffling parents, and embracing whatever style works in the moment.

Watership Down the animated feature was a true labor of love for Rosen, who had never directed a film and had never worked in animation, but learned the business from base principles, and created a studio from scratch, all to bring a book he loved to the screen. In a new interview on the Criterion Blu-ray edition, he talks about the advantage of working from a prestigious bestseller—every British celebrity he approached to voice a character immediately agreed—but admits the film was an uphill climb. Making it was slow and expensive, but it’s also clear, watching it today, that Rosen was operating more from a desire to honor material he loved than any practical efforts to keep costs down, streamline or punch up the story, or make it accessible to a broad demographic.

Watership Down follows a small band of rabbits, led by Hazel (John Hurt) and his runt brother Fiver (Richard Briers) in an attempt to escape Fiver’s premonition of doom coming to their warren. They travel overland together in a way that’s stressfully unnatural for rabbits—like Adams’ book, the film tries to keep close to animals’ biology and instinct-driven psychology instead of heavily anthropomorphizing—but their individual strengths and determination let them bond through a series of adventures. Then, once they achieve safety, they realize they have no mates, and they have to endanger themselves again to solve the problem. The material could easily have been treated lightly—and was, in a garishly perky episodic British TV version of the story Rosen produced in 1999—but what makes the 1978 version exceptional is its gravity and melancholy. Adams’ conception of Watership Down was a story about prey animals with “a thousand enemies,” and the film version in no ways compromises the seriousness and threat of living in a vast world of predators and unknowns, humanity chief in both categories.

The 1978 Watership Down is very much animation of its time, with glimpses of Rankin-Bass’ 1977 Hobbit in the gnarled, abstracted painted backdrops of rabbit tunnels; of 1973’s Charlotte’s Web in the repeated establishing shots of insects and grass in the breeze; and of France’s 1973 surrealistic wonder Fantastic Planet in an early glimpse of a photorealistic rabbit, seen in rigidly elaborate, painted close-up. Indie animator John Hubley worked on the film briefly in the concept stage, and some of his abstraction shows through, but it’s mated with Disney-esque attention to the body language and motion of animals, captured through long study of live rabbits in the studio.

And the Watership Down crew went beyond Disney in trying to ground their film in reality. The down Adams wrote about is a real place in England, and he used its real geography. Rosen took a helicopter and an away team of animators there to film it from above, to lock down the realism of their fantastically detailed layouts. Rosen’s script sticks tightly to Adams’ novel, departing only in small details, and thoroughly embracing its violence: The images of fighting rabbits foaming at the mouth and dripping garish red blood from open gashes are still shockingly graphic, even in a more indulgent age.

Watership Down has its notable visual flaws, where budget or talent provided hard limits. And it can be a curiously inert, quiet movie, with only small rises and falls in action, or action that occasionally feels too rushed to connect. But its characterizations, its dedication to detail and to mood, and its uncompromising violence all mark it as something that was rare back in 1978, and remains rare even today: an animated feature meant first and foremost for an adult audience. In some ways, it comes across as a film for an adult audience of one: Martin Rosen, who was driven by his love of the book to create a screen version in spite of his lack of experience or resources. But like so many works of art created for a single audience, its idiosyncrasies are what make it worth sharing.

Sadly a bit sparse, but what’s there is worthwhile. Criterion nabbed Rosen himself for a 15-minute interview during which he tells enlightening production stories, for instance about how Art Garfunkel disliked the song he cut for the film, and left it off his solo album—until the track, “Bright Eyes,” became a No. 1 hit in the U.K., whereupon he recalled and destroyed the album in order to re-release it with the song. Rosen walks through the timeline of the film project, admitting it was an insane idea for a newbie animator to take on—he initially approached the Royal Ballet and the Royal Opera Company, as he considered different live-action options. “It’s not a sensible decision that you make, making a film,” he says, explaining how driven he felt to make the movie at any cost. “Because it’s so hard. The work is so consuming that there’s got to be something that takes over at some point.” Ultimately, he gives all the credit to Adams’ story, which helps explain why his only other feature was an animated adaptation of Adams’ novel The Plague Dogs, three years later.

The 12-minute featurette with some of the animators is cute but less informative, though given Rosen’s humility, it’s amusing to see that they’re perfectly willing to take the credit he deferred. There’s also a cute bit where one of them talks about the relief of drawing Kehaar the gull (voiced by Zero Mostel) after a year of drawing rabbits. And there’s also a 12-minute interview with Guillermo del Toro, talking intelligently about the film’s period context, and its themes of technological concern, connection with the natural world, and making peace with death. He acknowledges its visual shortcomings, but says the film never feels “sloppy in a cavalier way,” and that it’s always clear that these were proud artists, working to the limits of their technical capacity, in a “fantastic accident of many many minds colliding.” Finally, there’s a trailer featuring so much rabbit gore, it’s a wonder so many parents complained that their kids didn’t get the calming Disney cartoon they expected.