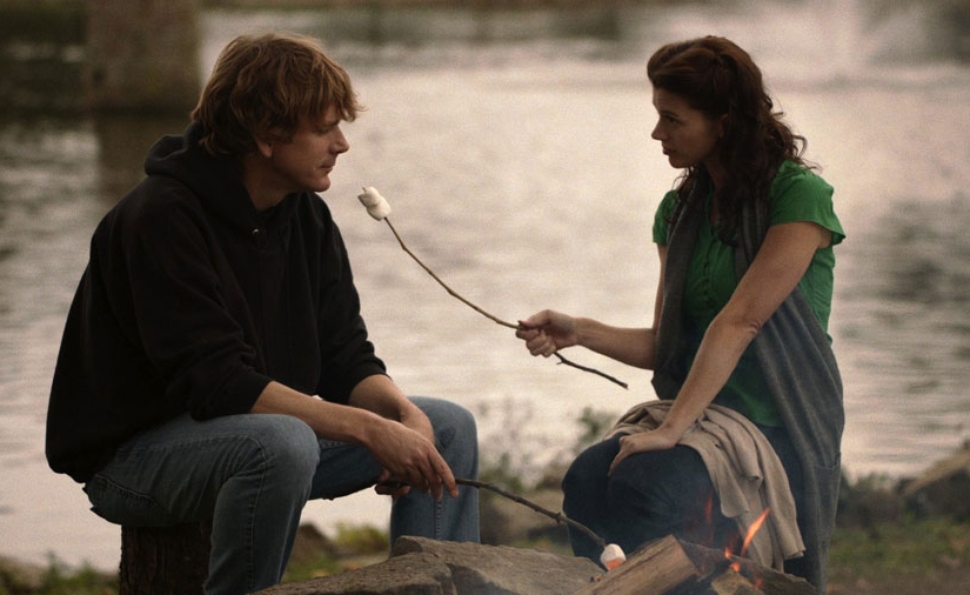 Viewers shouldn’t walk blindly into Old Fashioned, the new God-fearing romance from writer/director/star Rik Swartzwelder. Before anyone shells out for a ticket, they’d do well to take in the video below, a bit of promotional material enumerating the many merits of the film, its protagonist, and its set of values, which are intended to counter the hedonism of Fifty Shades Of Grey:

Old Fashioned longs to return to the good ol’ days, before the scourges of online dating and one-night stands sapped all the sweetness from modern courtship. No deceit, no sexual impropriety—simply a good, clean series of trials through which a man may determine whether a woman is worthy of the privilege of bearing his seed.

At least, that’s the charmingly nostalgic notion that guides the reprehensible behavior of Clay Walsh (Swartzwelder), the boy in this film’s stale boy-meets-girl setup. He’s a shaggy-haired, earnest guy who lives a simple, modest life as the owner of an antiques shop, where he also works as a carpenter. She’s Amber (Elizabeth Roberts), a doe-eyed flibbertigibbet who stops in town when her car, stuffed with everything she owns (including her trusty cat), runs out of gas. The apartment above Clay’s shop makes for a fine stopover for Claire while she figures out her next move in the wake of the violent incident that left her with a cast on her arm. Without delay, Clay and Amber are off to follow the same rigidly formulaic romance tropes that They Came Together took to the shed last summer. (Clay even talks out his relationship troubles with his multi-ethnic group of friends over a game of basketball, à la Along Came Polly.)

But this brimming cup of holy water has a twist: Clay’s monastic lifestyle goes to unusual extremes. Due to his dark past—Clay and his frat buddies enjoyed fleeting success as amateur pornographers in their college days (though who didn’t, really?)—Clay has sworn off not only dating, but sharing space with women, period. “I made a promise to never be alone with anybody who’s not my wife,” is how he explains to Amber that she must wait outside while he fixes the stove in her apartment. Clearly moved by his purity of heart, she agrees to marry him and sets to work proving her worth to him through a series of preposterous challenges. At one point, Clay demands she demonstrate a serviceable knowledge of how to cut a pear for a baby’s consumption. Amber, the inexplicable good sport, goes for it. In her infinite patience, Amber is saintly. What Clay brings to the table is unclear.

Old Fashioned fails in more banal ways, too. It’s a flatly predictable sort of romance; numerous leaves are turned over, both figuratively and literally. The film’s predilection for screamingly obvious symbols gets old fast: By the fourth shot of feet standing apprehensively before a door’s threshold, 12-year-olds will groan, “We get it.” At a couple of points, possible editing hiccups result in audio of characters speaking over footage where their mouths are closed. The script leans on broad caricatures like Brad, Clay’s buddy who daylights as chauvinist shock-jock swine, to illustrate the alleged decay of common decency in the modern-day Sodom that is the year 2015.

It’s Brad, actually, who betrays Old Fashioned’s hypocritical foundation. With lines like “Do you have any idea how many hot, stupid women there are in California?”, he’s a clear stand-in for the virulent sexism festering in the morally bankrupt present. The problem isn’t that such material is unrealistic—more sickening sentiments can be found in the comments section of any given article on Jezebel. It’s that Swartzwelder’s imagined solution is no better: He still wants to strip women of all romantic agency. He just wants to trade one form of objectification for another.