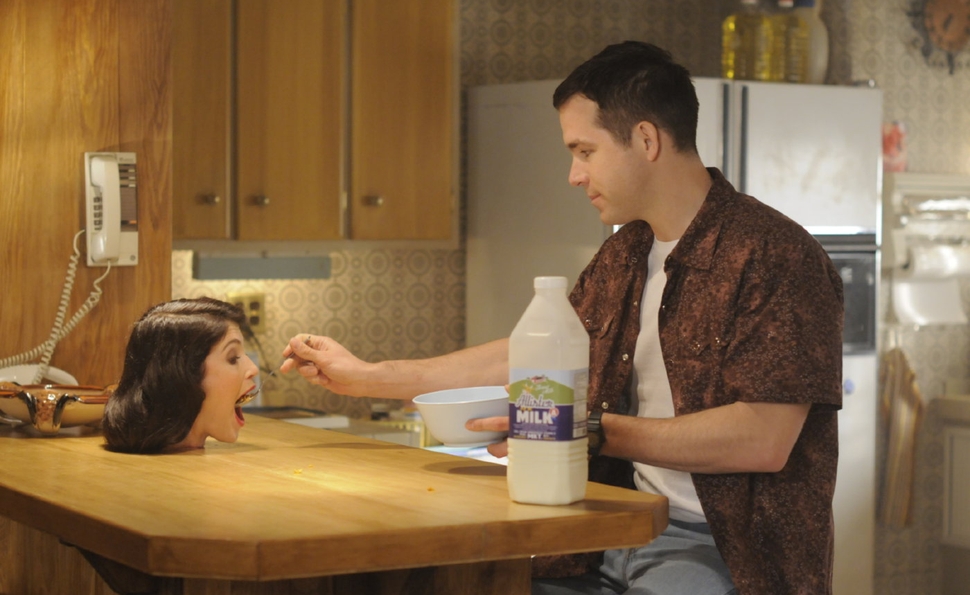 Marjane Satrapi’s horror-comedy The Voices will get no points as an accurate or sensitive portrayal of mental illness. Or violence against women. Or much of anything else, really. It’s far enough off base that it’s guaranteed to be divisive, especially among people who take these subjects seriously enough that they resent seeing them treated broadly and goofily. A more cautious filmmaker might have handled this subject matter delicately, or nervously, with apologies and caveats. But one of Voices’ strengths is that it’s outrageous and incautious, charging ahead with its crackpot view of a crackpot, and no hesitation offered or trigger warnings given.

Ryan Reynolds stars as Jerry, a shy, schizophrenic packing-and-shipping employee in a bathroom-fixtures plant. He has a checkered past in an institution, and emotional issues relating to his parents, but most of his co-workers don’t know; they just see a handsome, diffident guy with confidence issues, and occasional extreme social awkwardness. In private, though, it’s clearer that something majorly weird is going on with Jerry: His cat Mr. Whiskers and his dog Bosco constantly chat with him, pushing him in different directions, naturally representative of their species: Mr. Whiskers wants him to be more selfish and aggressive, Bosco just wants him to be a good boy. (Reynolds provides both voices, with an insinuating Scottish brogue for the cat and a booming Southern drawl for the dog.) Jerry’s state-mandated psychiatrist Dr. Warren (Jacki Weaver) offers a third set of mandates: She wants Jerry to stay on a regimen of anti-psychotic medication, talk honestly about whether he’s hearing voices, and generally act less insane. But when he takes his meds, he sees the world as it really is instead of as he wants it to be. He’s lonely when his pets stop talking, even though the things they say rattle him. For Jerry, the comforting fantasy takes precedent over dull sanity.

Satrapi is the Iranian artist behind the graphic novels Persepolis and Chicken With Plums, and the film adaptations of both; this is her first English film and her first adaptation of another writer’s script. (She ran across it through her agent, who pulled it from Hollywood’s Black List of promising unproduced screenplays.) It’s evident that she’s working at a remove. The Voices is stylish, striking, and lively like her other films, but less personal and less culturally specific, operating in a generic small-town-America setting rather than a highly nuanced and textured Middle Eastern one. But there’s still a familiar Satrapi element in the film’s grimly gleeful humor, and in its bright, unfaltering sympathy with Jerry, even when he starts murdering and dismembering women. The first crime isn’t much his fault—in a Tucker & Dale Vs. Evil sort of way, it happens more because he’s hapless and hesitant in a crisis than because he’s a bloodthirsty fiend. Subsequent actions speak more to his inability to function in the world. He’s much like the protagonist of Lucky McKee’s May: not entirely to blame for what he does, but still damaged enough that he can only bring further damage into the world.

The Voices resembles May in other ways: the intense color palette, the sharp notational divide between fantasy and reality, the deep bleakness underlying an artificially bright cheer. (Karen Leigh Hopkins’ recent black comedy Miss Meadows also comes to mind.) But Satrapi’s film has an advantage neither of those features had: Reynolds, who exudes baffled charm and goodwill even when he’s dutifully reducing his latest victim into wet wads that will fit neatly into dozens of Tupperware containers. Reynolds plays Jerry as considerably younger than his years, easily led and just wanting to please, and it’s shockingly easy to look past the mutilated corpses and see a boy who accidentally knocked his baseball through a window, and doesn’t understand why he feels simultaneously chagrined and exhilarated. The rest of the cast helps, as does the copious animal comedy. (One of the best conceits is that while Mr. Whiskers and Bosco represent Jerry’s best and worst selves, they’re also still animals, getting pissy about missed feedings, or excited about walks.) But Anna Kendrick is particularly striking as a shy co-worker with an awkward romantic interest in Jerry. The scenes between the two of them are surprisingly soft and touching for such a manic movie.

Perry and Satrapi’s film makes much of the difference between the grotesque real world and the shiny hallucinations Jerry wraps himself in, and The Voices operates around a similar dichotomy. Taken remotely seriously, it’s a ghastly movie suitable for the most misogynistic MRAs on the Internet, a story in which living women play nasty games with men’s affection, but dead and dissected ones become endlessly supportive, loving, and controllable. Taken as the wild comic farce it is, it’s something sadder and more playful, a fantasy about willing self-delusion and the lengths people can unwittingly go to when they’re unable to face how the rest of the world sees them. It’s a ready-made cult movie, complicated and weird and grotesque and distinctly silly, and best when not taken remotely seriously.