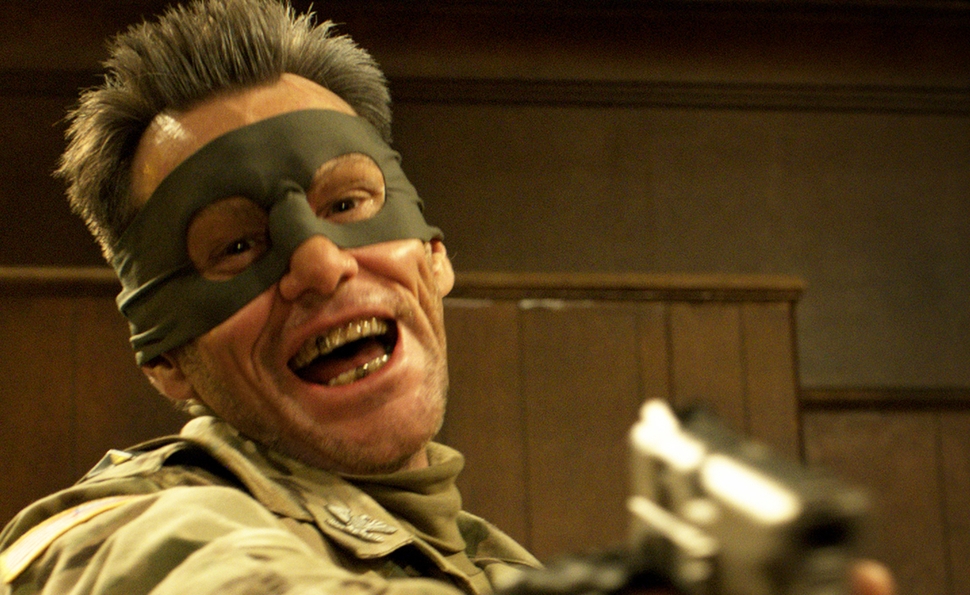 At one point in Kick-Ass 2, the antagonist sets out to prove his dominance over a specific superhero by raping the guy’s lover. As one of his minions holds the struggling woman, he gloats over her helplessness and tells her she’s done banging heroes, and she’s about to experience “evil dick” instead. Then he can’t get an erection. As she mocks him, he turns away and desperately tries to stimulate his uncooperative penis; finally, he whines that he’s just not in the mood right now. It’s sort of a funny moment, a conscious satirical defanging of the “women in refrigerators” comic trope, in which heroes’ love interests are raped, mutilated, or killed to give the hero a little cheap motivating angst. Except that then, the villain tells his minion to viciously beat the girl instead. She winds up hospitalized; meanwhile, another minion murders the cops who arrive to rescue her.

This sequence is Kick-Ass 2 in a nutshell: a messy, confused, over-the-top mixture of brutality and sick comedy, puckishness and ugliness, self-awareness and tone-deafness. The fact that the villain calls himself The Motherfucker, and is played by skinny, slightly nasal young actor Christopher Mintz-Plasse, is a large part of the film’s joke: He’s clearly overreaching and a little pathetic in his evil ambitions, and he’s too ineffectual and soft to be either a rapist or the intimidating monster he longs to be. And yet the film constantly has it both ways. It mines yuks out of his spastic attempts to be a badass, while still letting him commit actual atrocities. It laughs at his childish vulgarity, while reveling in its own larger, broader childish vulgarity. The Motherfucker is a potty-mouthed, often amusing twerp who keeps managing to be authentically horrifying, and he’s the perfect representation of the film as a whole.

The sequel takes up where 2010’s Kick-Ass left off. Pint-sized underage assassin Hit-Girl (Chloë Grace Moretz), who lost her father Big Daddy (Nicolas Cage) in the first film, continues to train and perform her bloodthirsty, confrontational version of superheroics. After teenage superhero Kick-Ass (Aaron Taylor-Johnson) begs for a team-up, she starts training him as well, but then circumstances push her away from the vigilante life. From there, she and Kick-Ass head down separate but parallel paths. While he joins a group of similarly slightly pathetic heroes with outsized confidence about their skills, she joins a group of her peers, who also have outsized confidence about their skills. When prototypical superficial mean girl Brooke (Claudia Lee) brags about the wonders of being a popular high-schooler, all the advantages she cites could apply to being a superhero as well: the tight outfits, the peer worship, the sense of strength and independence. There’s an innate cleverness to the linkages between the two stories, even though they never run particularly deep.

Meanwhile, angry rich kid Chris D’Amico (Mintz-Plasse) wants to avenge his crime-lord father, killed by Kick-Ass in the first film. Declaring that his superpower is being “rich as shit,” he gives himself that infantile moniker, dresses up in his mom’s black leather fetish-wear, declares he’s the first supervillain, and orders long-suffering family fixer Javier (John Leguizamo) to procure him a bunch of costume-ready, villainous hirelings so he can destroy the city. He’s ridiculous, except for one thing—he actually can afford to hire murderers to kill anyone he wants.

Writer-director Jeff Wadlow has Kick-Ass 2’s characters repeatedly, loudly confirming to each other that they aren’t in a comic book, that this is the real world, man, and there are real consequences. But Kick-Ass 2 is as much a petty power fantasy as the most baldly wish-fulfillment-oriented superhero comic. The Motherfucker is Batman—dead parents, palatial mansion, infinite resources, awesome secret hideout, ultra-competent manservant, driving goals—except as a selfish, smug teenager. It’s all the fun of heroism without the responsibility, ethics, or suffering.

Kick-Ass 2 is generally divided on whether superheroing is more about fun or suffering: Terrible things happen to its heroes, and the script emphasizes how hard it is to face those supposed “real-world consequences,” but the characters always shrug and move on. More literally, Kick-Ass and Hit-Girl walk around with bruises and blood on their face half the time to emphasize that they’re normal people who take damage in combat, but the marks always clear up quickly. And while they’re mourning murdered parents in one scene—a staple of superhero stories, included here almost by rote—they’re wisecracking the next. There’s a sense that nothing in their world is really all that serious—or really all that funny.

Part of the tonal conflict likely comes from a commercial instinct to make the material comedic enough to appeal to a broad audience; part simply comes from squeamishness. Mark Millar’s original limited comics series Kick-Ass and Kick-Ass 2 embrace a Garth Ennis level of provocation and extremity for shock value. In the comic, the villain does rape his victim, and there’s nothing satirical or smart about it. The protagonists are visibly much younger; John Romita, Jr. draws them with such skinny limbs and big heads that they look like toddlers. And the comic is relentlessly bloody, with a high body count including children and animals. (In the comic, The Motherfucker decapitates an enemy’s dog; in the film, he gasps when someone suggests it, and says he isn’t that evil.) The same thing happened with Millar’s comics series Wanted, which was also adapted into a film, and also considerably softened, especially in its depiction of rape. The comic is simply about brutality; the film is about trying to make that brutality funny, and about making it safer for audiences in the process, but that often just makes it seem petty.

And in its defense, the results aren’t entirely like anything else out there. Kick-Ass 2 lacks the humorless grimness of Christopher Nolan’s work, or the playfulness of early superhero comedies like Mystery Men. It has more of an edge than most comedies. But much of that edge just consists of hoping a jaded audience will flinch—and be surprised and delighted that something can actually still make them flinch—when Hit-Girl threatens to stick her boot up Brooke’s snatch, or uses an experimental weapon to make her enemies simultaneously puke and release a flood of unconvincing CGI diarrhea. It’s immature “Gotcha!” humor to go with the immature violence fantasies, and it has about the impact of the angry, self-impressed character Ben Folds channels in “Rockin’ The Suburbs”: “You better look out, because I’m gonna say fuck!” Folds warns self-importantly in the song. Kick-Ass 2 says “fuck” over and over in many ways, but in spite of its evident pride in the achievement, it isn’t accomplishing much but revealing the narrowness of its own ambition.