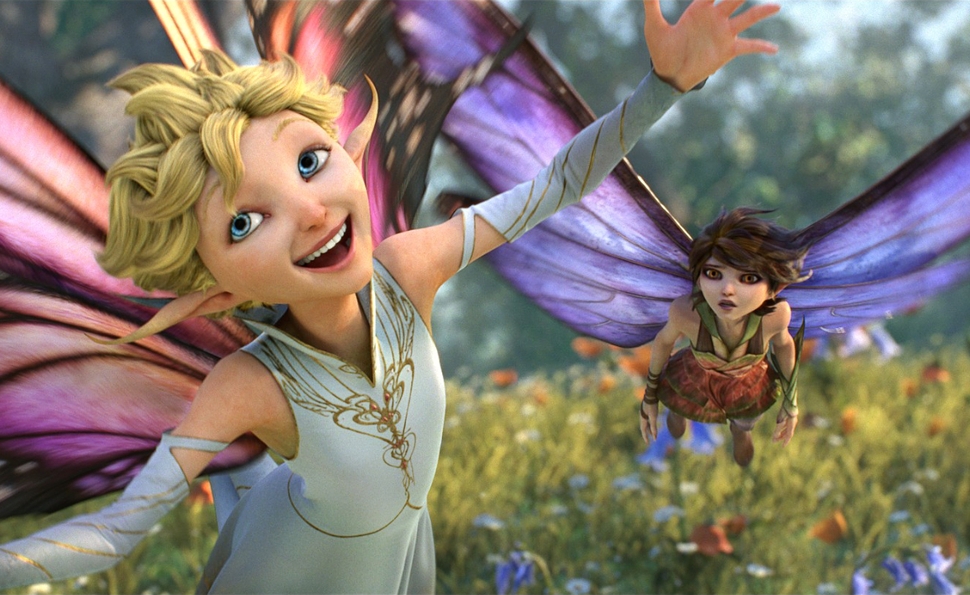 There are moments in Strange Magic, an animated film billed as “from the mind of George Lucas,” that seem less like a movie than like a fever dream. They start arriving early, too. Within the first five minutes, the film launches into a medley of Beyoncé’s “Crazy In Love” and the Elvis Presley hit “Can’t Help Falling In Love” as sung by a pair of fairies cavorting in a meadow, occasionally in split-screen. It is, if nothing else, like nothing anyone’s seen before. Whether that’s a good thing is another question.

But let’s imagine for a moment that a fantasy film inspired by A Midsummer Night’s Dream—if only insofar as it features fairies and a love potion—and packed with showtunes-ed up versions of popular songs from the 1950s through today, isn’t a bad idea, that done well, it could have been a winning combination of fantasy imagery, fairy-tale enchantment, and pop music. It’s hard to conceive of a less-pleasant execution of that idea than Strange Magic, starting with the design of the main characters. Its almost-lifelike fairies look like they came this close to climbing out of the uncanny valley, then injured themselves on the fall back down. As the featured characters on a line of greeting cards, they’d be cute enough. As the stars of a feature-length film, their plastic skin and almost-alive eyes grow less welcome with each appearance. The animation comes from  Industrial Light & Magic and Lucasfilm Animation Singapore, the team responsible for Rango, and the further the character designs get from humanity, the more winning they look, particularly an amusing rodent-like imp that wouldn’t have been out of place in Rango. Unfortunately, it’s the almost-human fairies, elves, and other woodland spirits that take center stage.

An infusion of personality wouldn’t have hurt, either. Strange Magic plunges directly into its convoluted plot without pausing to create a reason viewers should care about any of the characters going through the convolutions. The story concerns two rival supernatural kingdoms—one plunged into darkness and ruled by a love-averse Bog King (Alan Cumming), and the other a place of sunshine and high spirits overseen by a jolly Fairy King (Alfred Molina) with two daughters, the boy-crazy Dawn (Meredith Anne Bull) and her older sister Marianne (Evan Rachel Wood). Marianne, as the film opens, is set to be married off to the handsome, shallow Roland (Nashville’s Sam Palladio, channeling Elvis), but backs out after discovering his infidelity on their wedding day. She declares herself through with love, via the growliest rendition of Bacharach and David’s “Never Fall In Love Again” ever sung by a scowling fairy. To win Marianne back—and with her, her father’s army—Roland conspires with Sunny (Red Tails’ Elijah Kelley), an elf who’s desperately in love with Dawn, to infiltrate the Bog King’s kingdom and rescue the Sugarplum Fairy (Kristin Chenoweth), and with her, her magic love potion.

It makes sense for Roland to be a caricature of a fairy-tale hero, but did everyone else have to be just as thinly realized? When characters make declarations of love, heartbreak, and determination via songs first made famous by everyone from Bob Marley to Deep Purple to Whitney Houston, it’s hard to care what becomes of them, and too easy to wish they’d just stop singing. And that’s ultimately Strange Magic’s fatal flaw, one worse than the unappealing, barely developed heroes: Lucasfilm recruited Marius de Vries, who did similar mashup work for Moulin Rouge!, but he hasn’t produced any winning renditions of the famous songs here. Even if the on-the-noseness of the choices wasn’t a problem—the Sugarplum Fairy uses “Love Is Strange” to express the sentiment that love is, well, strange—the insipid, lite-rock arrangements and grating performances would be. When a love-potion-affected Dawn can’t stop singing “I Can’t Help Myself (Sugar Pie Honey Bunch),” it’s supposed to be annoying, but the same intentionality doesn’t apply to Marianne’s brutal take on Kelly Clarkson’s “Stronger.”

It’s possible that the film might have turned out better with a less tortuous production process. Lucas, by all reports, had been turning over the idea for more than a decade, but the sale of Lucasfilm to Disney in 2012 hastened it into production even as Lucas stepped away from the company. (Its existence wasn’t even public knowledge until an announcement last November.) Gary Rydstrom, who directed the Pixar short “Lifted,” and whose association with Lucas dates back to an entry-level job on Indiana Jones And The Temple Of Doom, stepped in as director at the time of the sale. Three years later, this mess arrived.

That said, Strange Magic certainly isn’t an ordinary sort of mess, and the personal nature of the project is still evident in the finished film. Now married, Lucas has suggested he drew on his grumpy bachelor years for the Bog King, and it’s worth remembering that his America Graffiti helped change the way movies use pop music with its understanding of how the songs on the radio could express emotions in ways more meaningful than its characters could ever say out loud. Done better, this might have been the ultimate realization of that notion. Instead, it’s a tacky pile of fairy dust.