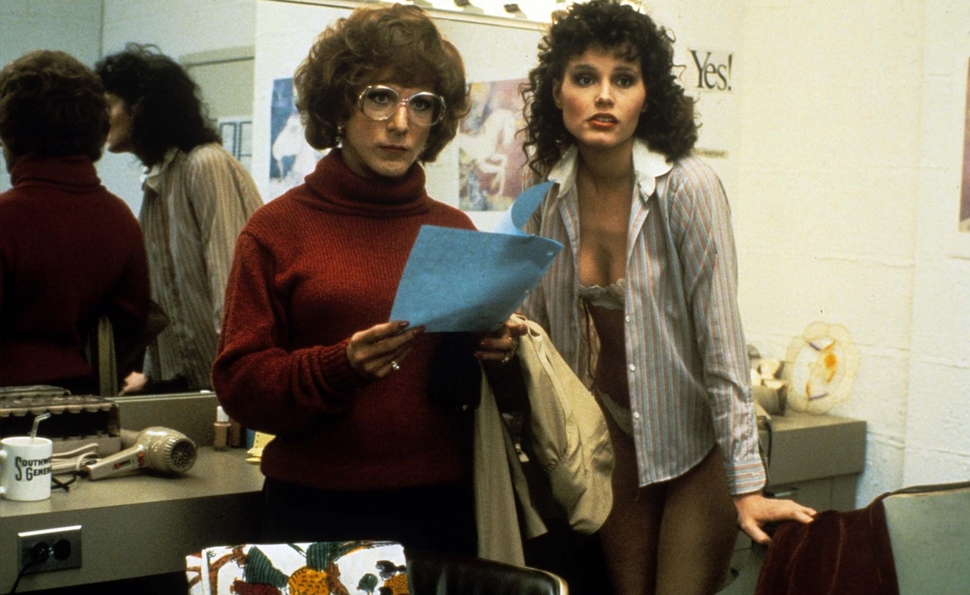 Dustin Hoffman has said in interviews that the idea for 1982’s Tootsie first occurred to him while he was working on 1979’s Kramer Vs. Kramer, about a man left to raise his young son after his wife abandons them and runs off to discover herself. Hoffman decided Kramer Vs. Kramer had an interesting seed of an idea in a man simultaneously acting as father and mother, and that Tootsie’s story, also about a man divided between male and female personas, was a natural outgrowth. But the two films have more in common than just Hoffman’s involvement and their stepping-stone development. Both came in the middle of a contentious shift in American society, as women’s roles at home and the workplace changed. Both suggest, daringly for their era, that men can take on feminine aspects without losing their masculinity—and without shame, because the gender divide is such an artificial, wrong-headed construct to begin with. And both films rely heavily on Hoffman’s self-effacing appeal to sell a potentially gimmicky concept. But only one of the two is a wacky cross-dressing comedy that ends up being smarter about feminism than most films with more serious subject matter.

The interviews and featurettes on the new Criterion edition of Tootsie paint a portrait of a film developed by a bunch of men working on one hand with grave, careful sensitivity to define how women experience the world, and on the other hand palling around like slapstick-movie characters, and engaging in goofy manipulations to get their way. (Hoffman decided early on that director Sydney Pollack should play a key role; Pollack, who says he hadn’t acted in 20 years, was dead-set against it, but Hoffman badgered him with in-character missives and flowers until he broke down.) Over three years, the story developed—at one point with major uncredited assistance from Elaine May—and the meticulousness of Larry Gelbart and Murray Schisgal’s script suggests just how rigorously all the angles were worked out.

Hoffman stars as Michael Dorsey, a difficult New York City actor who hasn’t worked in two years, after alienating the industry with his demands for intellectual rigor and logic in his work. (Hoffman cheerfully admits an autobiographical inspiration there.) Working on the side as a waiter, drama teacher, and coach to aspiring artists like Sandy (Teri Garr), he’s desperate for a real job, so when Sandy gets gonged off a soap-opera audition, Michael dons elaborate drag, auditions as “Dorothy Michaels,” gets the role, and rapidly becomes famous, largely for injecting a masculine, no-nonsense confidence into her character. The film has fielded criticism for being yet another story that implies men are better at everything than women, including being women (see also: Mr. Mom, Mrs. Doubtfire, even Kramer Vs. Kramer), but the messages are far more complicated and kind. As Dorothy, Michael becomes a role model precisely because he recognizes the roles he’s pushed to play, and bridles against them: Where the women on the soap endure a patronizing, sexist director (Dabney Coleman), Dorothy calls him out in public. Where women like Julie (Jessica Lange) play ditzy sex objects on the show, Dorothy rewrites her own lines to give herself a stronger, more substantial part. Dorothy surprises and inspires everyone by standing up for himself like a man, while remaining soft-edged enough to pass as a woman.

What makes Tootsie a smart, enduring comedy instead of a silly, momentary one is its real sympathy for women: Michael’s speeches about how in touch he is with women’s problems now are simultaneously presumptuous and smartly on point, and they’re sadly still relevant. When dim alcoholic soap star John Van Horn (George Gaynes) tries to molest Dorothy, won’t take no for an answer, and only meekly backs down when he mistakes her laconic playwright roommate Jeff (Bill Murray) for her boyfriend, the situation is played as uncomfortable for everyone, more interrupted rape attempt than funny mistaken-identity moment. (When Jeff offers a joke afterward, Michael grumbles “Rape is not a laughing matter,” and means it.) As part of that sympathy, Tootsie consistently reaches for smarter versions of well-worn drag jokes. There’s plenty of gay panic in the film—both when Michael falls for Julie, who’s horrified to think her good friend Dorothy has a sexual interest in her, and when Van Horn and Julie’s dad Les (Charles Durning) both fall for Dorothy—but it’s mostly melancholic and tragic. People are drawn to Dorothy, but the disguise prevents Michael from responding as honestly to them as he’d like. There’s plenty of prissy drag humor, but it’s similarly played wistfully: It’s funny when Michael talks about fashion rules (“You can’t wear white to a casual dinner”), pines for a specific purse, or fusses over wanting to be prettier, but it’s funny because he’s so knowledgeable and keenly, sincerely invested in Dorothy, not because a dude doing lady-stuff is ridiculous.

That sincerity is a lot of what makes the movie funny, as well. No one plays their roles for laughs except Garr, whose flighty actress character is meant to be a bit histrionic. Pollack advised his cast to act like serious people caught in a silly situation, and they all approach the material as if inspired by Bill Murray’s laid-back, gently quizzical naturalism. Only Dave Grusin’s perky sitcom score—and the countless laugh-out-loud moments of absurdity played straight—mark this as a comedy.

What ultimately makes Tootsie linger past the giggles is its immense affection toward everyone on the screen. Everyone catches a little mockery—in the film’s view, actors are egotistical and high-maintenance; writers are needy and out of touch; men are entitled and arrogant; women are too self-effacing, to a degree that implicates them in their own misuse—but the film is never harsh toward any of these groups. It’s endearingly good-natured, like Michael’s true character under the wig and pancake makeup and dress. Dustin Hoffman’s smile has always been awkward and forced, the rictus facial expression of someone trying to sell goodwill, while fearing that people will see through him. Here, that smile not only sells the pretense that defines his character, it sells the message of the entire movie: that everyone wants to be their most authentic selves, but will still generally don whatever costumes will make people like us.

The 10 minutes of deleted scenes on this disc are dire and deserved to be cut, though a four-minute outtake of Gene Shalit playing himself interviewing Dorothy Michaels (who hits on him and asks him on a date!) is pretty priceless. A couple of brief screen tests, showing early iterations of the Dorothy makeup and costume, are mildly interesting, as are the 2014 interviews with Hoffman (18 minutes, mostly musing back on his career) and Everybody Loves Raymond creator Phil Rosenthal (15 minutes), talking about his admiration for the film.

But the meatiest feature is the 68-minute 2007 featurette “A Better Man: The Making Of Tootsie.” It incorporates copious on-set and behind-the scenes footage from the half-hour 1983 featurette “The Making Of Tootsie” (also included here), but also plenty of later reminisces from Pollack, Garr, Lange, and others. Some of the best bits include Coleman revealing how he played a director by imitating Pollack’s directing (with clips of both men to prove it), Pollack detailing what Elaine May brought to the script, and Hoffman getting teary-eyed and overwhelmed as he describes his empathy for Dorothy, a plain-looking woman who he feels would have been ignored, marginalized, and never married. The strength of his emotion is surprising—admittedly, Dorothy becoming tremendously famous and successful, not to mention universally adored, is a stretch, but Hoffman really seems to feel serious pity for his imaginary unloved version of this imaginary character.