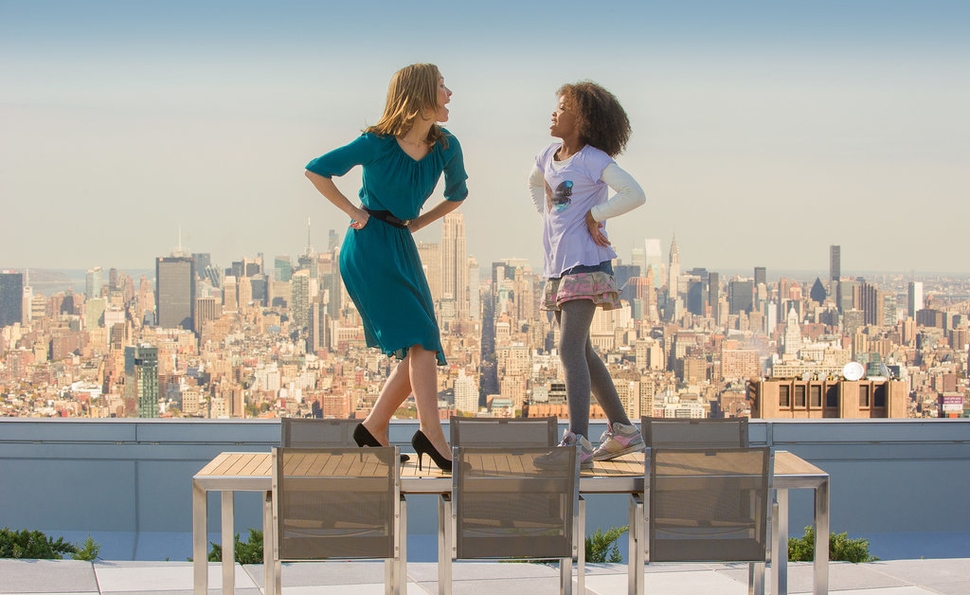 Little Orphan Annie has been around in some form or another for nearly a century, and while her dominant medium has changed—from a comic strip to a 1977 stage musical to film adaptations of the musical—the character has more or less remained rooted in the era that birthed her. She’s a post-World War I kid who came into her own during the Great Depression, and her story and attitude have always reflected that. Transitioning her to the modern day, as director/co-writer Will Gluck does with his new Annie, is compelling in theory—extreme class disparity hasn’t exactly disappeared in the ensuing decades—but there are plenty of challenges, both tonal and narrative, to overcome.

The transition from the familiar 1930s Annie to 2014’s Annie isn’t always graceful, but it is often fun, in a flashy, chaotic sort of way that firmly establishes the film’s intended audience. Annie is unquestionably a movie for kids, the sort of glossy kiddie wish-fulfillment fantasy that was last in vogue in the mid-1990s. It’s broad and occasionally appallingly materialistic, but it’s also bold in its approach to transforming a musty, dusty property into something that could conceivably appeal to young audiences in 2014.

Gluck engages with the updated concept from the first frame, opening Annie with a shot of a plucky red-haired girl named Annie, who’s quickly shuttled aside in favor of Quvenzhané Wallis’ Annie Bennett. (Or “Annie B.”—get it???) The curly hair and pluck remain, but this Annie isn’t the Little Orphan we’ve known for decades. First off, she isn’t exactly an orphan, she’s a foster kid, living in a run-down apartment in Harlem with a bunch of other children under the neglectful eye of a hateful, alcoholic former pop-star wannabe named Colleen Hannigan (Cameron Diaz, making a meal of every scene she’s in). Annie spends her days charming the non-Hannigan residents of her neighborhood, searching for her parents, and singing updated versions of familiar songs like “It’s A Hard Knock Life” and “Tomorrow.” Then one day she literally runs into Will Stacks (Jamie Foxx), a telcom billionaire who’s making an ill-conceived run for New York City mayor, and could use a little humanizing in the eyes of the hoi polloi. The story writes (or rather, has written) itself from there.

Annie often gets bogged down in the particulars of Stacks’ mayoral run, devoting a good chunk of its plot to the evil machinations of his shady political advisor Guy (Bobby Cannavale) and his relationship with his personal assistant/requisite love interest Grace (Rose Byrne). It’s all arguably necessary to keep Stacks’ redemption arc chugging along, but it detracts from Annie’s biggest strength: the frighteningly charismatic Wallis, who elevates every interaction with the stiff adults who don’t know what to make of her. Byrne especially benefits from Wallis’ glow in their featherweight rendition of “I Think I’m Gonna Like It Here,” compensating for her thready singing voice (which is all but buried under oppressive production) with an obvious, infectious delight in her remarkable new daughter-figure. Similarly, Foxx often works in full-on clown mode in Wallis’ presence—deploying no fewer than four bug-eyed spit-takes over the course of the the film—bringing some much-needed looseness to a character who was conceived as stiff and unrelatable. The only performance Wallis can’t come close to redeeming is Diaz’s, which is admirably go-for-broke, especially in a bonkers rendition of “Little Girls,” but too shriekingly grating to justify her eventual redemption.

But when Annie isn’t functioning as a showcase for Wallis’ tiny preternatural charm, it’s tonally varied to the point of discombobulation. Gluck and his co-writer, Aline Brosh McKenna, inject a lot of wink-wink commentary into their script, which clashes with the forays into earnestness required by the relationship between Annie and Stacks. And while there are a handful of clever meta-commentary jokes (including a very silly movie-within-a-movie starring Mila Kunis and Ashton Kutcher, which is “directed” by Gluck associates Phil Lord and Chris Miller), they fit uncomfortably next to the movie’s broader kiddie humor. Annie even seems at odds with its own status as a musical, sometimes acknowledging the oddness of characters bursting into song, other times giving into the fantasy without comment.

When Annie does fully give in to that fantasy element, it excels as a movie musical. Gluck takes interesting, varied approaches to filming different numbers, some of which work: The rousing opening overture engages with the film’s urban setting both sonically and visually, “Hard Knock Life” uses fun step-and-handclap percussion techniques, and “Tomorrow” uses reflective surfaces to establish Annie’s fantasy world. Other numbers, however, conform to a bland music-video aesthetic, particularly Foxx’s “The City’s Yours,” which he performs from inside a helicopter (!!) with a sexy-crooner vibe that calls to mind his second career as an R&B star, which is a little uncomfortable, given that he’s singing to an 11-year-old girl. (This version of the song also strongly resembles “Empire State Of Mind,” which may be intentional, given that Jay-Z, along with Will Smith and Jada Pinkett Smith, are producers on the film.) Annie completely abandons the movie-musical conceit for “You’re Never Fully Dressed Without A Smile,” which hands the musical reins to pop star Sia, who sings the song over a montage of Annie and her friends having fun at a movie première. And the less said about Diaz and Cannavale’s fever-dream rendition of “Easy Street,” the better.

Annie’s musical mixed bag is reflective of its overall scattershot attempt to update Little Orphan Annie to 2014. Some smart casting and an overarching sense of play take the film a long way, but they can’t fully compensate for the disconnect between Annie’s moldy premise and its ultra-2014 trappings, which should feel fresh and new for approximately four to six more months. In bringing Little Orphan Annie into today, Gluck and Co. have neglected to create something that will hold up tomorrow.