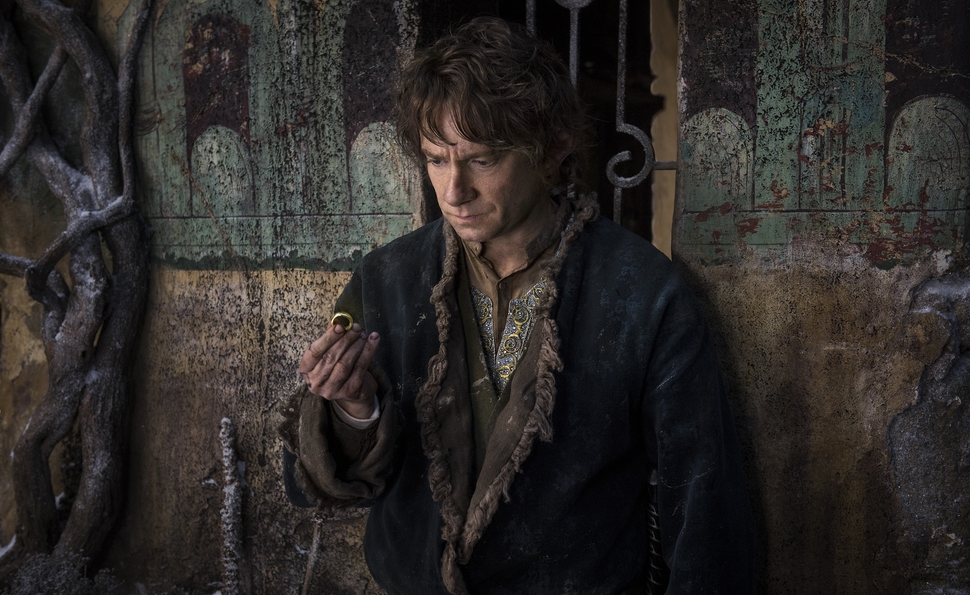 The Hobbit: The Battle Of The Five Armies

The opening throwdown in Peter Jackson’s third and final Hobbit installment, The Battle Of The Five Armies, takes up the story right where the previous chapter left off. It also neatly, shamelessly takes up the problems that have haunted the Hobbit trilogy from the start. The fire-breathing dragon Smaug (voiced by Benedict Cumberbatch), whipped into a righteous fury by hobbit Bilbo Baggins (Martin Freeman) and the dwarves attempting to reclaim the mountain kingdom of Erebor, begins bombarding the nearby human village of Laketown. Peasants scream and flee and die. Saintly human hero Bard (Luke Evans) breaks out of prison and prepares to make a stand. The elf Tauriel (Evangeline Lilly) hustles her dwarf buddies and Bard’s children out of town on a boat. It’s all big and noisy and frantic, with familiar characters running all over the place in a fast-cutting mania, each pursuing their own specific ends.

And in the middle of all this, Laketown’s corrupt leader (Stephen Fry) has his minions pack all the gold they can carry into a boat and attempts to make his escape via the town’s canals, loudly bemoaning his inability to save the miserable wretches around him, while simultaneously smacking away the wounded, terrified refugees who attempt to swim to his boat. Told that the boat is overloaded, he quickly makes the executive decision to throw his flailing, cartoony toady Alfrid (Ryan Gage) overboard. It’s a sloppy, broad chunk of class-based humor crammed as comic relief into what’s meant to be an epic sequence of destruction, and yet another storied faceoff between good and evil.

With the burning of Laketown, co-writer/director Peter Jackson is once again determined to cram every possible character and tone into a sequence that feels disorganized and bulky under its own weight. Like so many other frantic sequences in the Hobbit films, it feels overcrowded and focused on relative inconsequentials—until Bard and Smaug face off, and Jackson finally focuses his attention in one place. For a moment, dwarves and elves and quests and politics and slapstick gags all fall away, and Jackson’s Middle Earth holds its breath to see what will happen next.

In spite of the film’s title, and the immense cross-species battle that takes up close to a third of its run time, The Hobbit: The Battle Of The Five Armies features more such moments than the previous two chapters of the trilogy, in part because the character-building and arc-establishing is finally all out of the way, and Jackson can buckle down to the action on many fronts. He also seems to have given up on some of those fronts entirely: There’s less effort than ever to distinguish between the dwarves whose quest to regain Erebor is supposedly driving the entire story, apart from their leader Thorin, whose “dragon sickness” takes center stage, until it’s time for him to face off with his orc nemesis in a personal fight that goes on and on like a miniature version of Return Of The King’s nigh-endless endings. There’s also less emphasis on the by-the-numbers forbidden love between token girl-elf Tauriel and stud-dwarf Kili (Aidan Turner), though Tauriel’s not-so-secret admirer Legolas (Orlando Bloom) does continue to express his fondness by glowering forbiddingly in the background of all her scenes like the world’s blondest, prettiest Mr. Darcy. The film continues to gin up extra character business for Legolas’ fan-favorite father Thranduil (Lee Pace), but otherwise focuses more on swinging swords than slinging banter.

And while Hobbit movie No. 2, The Desolation Of Smaug, largely lost track of Bilbo’s character development, Five Armies brings him back to the fore, and re-finds a measure of narrative center in the process. There’s still plenty of business around the margins: A side plot in which big guns Gandalf, Galadriel, Saruman, and Elrond face down a vaguely defined threat called The Necromancer (Cumberbatch again) amounts to little more than a collective cameo for Cate Blanchett, Christopher Lee, and Hugo Weaving, and further underlining that the Hobbit films occur before Jackson’s Lord Of The Rings trilogy. And incomprehensibly, Alfrid returns, and returns, and returns, each time proving himself ridiculously inept and cowardly. (Which never prevents Bard from giving him important jobs, because the garishly over-the-top comedy of conveniently ignored incompetence is exactly what a gigantic drama-fantasy needs.) But at 144 minutes, Five Armies is the shortest and the least bloated and discursive of the Hobbit films. It’s also the one that relies least on filler material and extra character business, and the one that most earns its moments of outsized, dire drama.

There are, however, strange echoes of Jackson’s Lord Of The Rings movies throughout. Not just the elements that indicate this is all one giant story, or even conceptual rhymes, but moments that feel outright stolen from Jackson’s original cinematic triumphs: Gandalf dangling, grubby and defeated, off the side of a wizard’s high tower in a tiny metal cage, as he did in The Fellowship Of The Ring. Legolas and Tauriel crouching on a hill outside the gates of Gundabad, watching the orcs file by as Frodo and Sam did at the mouth of Mordor in Return Of The King. The entire battle sequence that caps the trilogy, with its beats that recall, moment by moment, sequences from each of the three movies. In a feature less driven by relentless pacing, this might all feel like deliberate narrative parallelism, a way to draw up the threads holding this whole vast myth-cycle together. But as action sequence after action sequence whisks by, there’s no time for reflection on what’s come before, and no sense that Jackson is reflecting, either.

Jackson doesn’t need apologisms or praise at this point: His Tolkien adaptations are a billion-dollar business, and it’s clear after nearly 15 years of them what he does well, from orchestrating a believably rough and detailed, lived-in fantasy world to staging huge, complicated fights with admirable clarity. With Five Armies, he again exercises his strengths, and he pares away some of the self-indulgence and silliness that’s gotten in the way with this follow-up trilogy. But the film is torn between the legendary and the personal, between the effort to bring closure to a dozen individual character arcs, and to focus on a battle that connects them all. And the whole trilogy strains under the effort to blow a children’s-book-sized bit of adventure backstory into a legend the size of the world-shaking war that followed its action. There’s some relief to be found in Five Armies’ return to Bilbo Baggins’ story, and to the scraps of humanity (in whatever race or species they appear) that make this world feel familiar and approachable. But above all, there’s a relief when the baggage and distractions fall away, and Tolkien’s well-defined clashes of light and darkness are allowed to take center stage again. And there is, frankly, a relief that it’s over. At least until Jackson gets his hands on the rights to The Silmarillion, and starts the cycle all over again.

GoWatchIt: Buy. Rent. Stream The Hobbit: The Battle Of The Five Armies