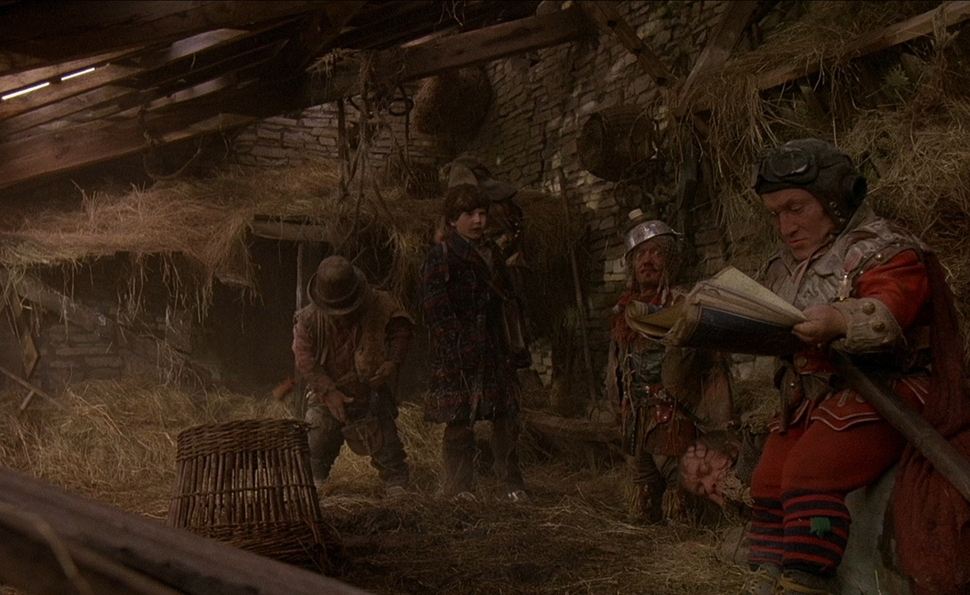 In a sprawling 80-minute interview conducted at a 1998 Finnish film festival, and presented on Criterion’s new remastered 2k Blu-ray release of Time Bandits, director/co-writer Terry Gilliam claims he’s a documentarian. Nothing in his films, he says, is wholly invented: He’s just “providing a new set of eyes for people,” letting them see things they don’t normally notice. (As an example, Gilliam cites how he thought Federico Fellini was a fantasist, until he visited Rome and saw for himself what Fellini was trying to communicate.) It’s hard to reconcile that outrageous claim with Gilliam’s actual movies, which are universally based in a deep-seated love of fantasy escapism. It’s particularly hard to see it in Time Bandits, a fantasy about a boy unwillingly dragooned into a group of ambitious schemers who’ve stolen God’s map of the universe, and plan to use it to steal all the valuables they can carry, then flee through time to centuries before or after their victims were born.

But it might help to know that Gilliam first conceived of the film as an adventure told, and seen, through a child’s eyes. On Criterion’s commentary track, he says he wanted to make a family-friendly film during the endless struggle to get Brazil together, and his initial concept was a film shot entirely from low camera angles, representing a child’s point of view. He wasn’t sure a single kid could carry the story, so he continued the low-angle theme by hiring, as his band of thieves, a who’s-who of little-people actors. The result, filtered through the lens of a voracious young reader of world history, is a pop-eyed, anarchic vaudeville show of a movie, a series of loosely connected sequences in which the time bandits sail on the Titanic, encounter Robin Hood (John Cleese), Napoleon (Ian Holm), and Agamemnon (Sean Connery), bring cowboys and a spaceship to bear in a fight, and battle elements less familiar from history class, like an ogre (Peter Vaughan) and the ultimate manifestation of Evil (David Warner). It’s a grab-bag of elements a particularly excitable and impatient kid might bring together for a story in Axe Cop mode. Time Bandits isn’t exactly a documentary, but it does amount to an assortment of real-world elements, remixed and re-envisioned through a new lens.

That lens, per Gilliam’s usual vision, is a grubby one. Going all the way back to his days with groundbreaking British comedy troupe Monty Python’s Flying Circus, he’s shown a love for cluttered sets and cluttered storylines, with actors giving outsized performances against messy backdrops crammed with detritus. Time Bandits is one of his more chaotic films, which is really saying something, but his six time-bandits—David Rappaport, Kenny Baker (a.k.a. R2-D2), Malcolm Dixon, Mike Edmonds, Jack Purvis, and Tiny Ross—fill the screen with fractious energy. Whenever they’re in the same space, they’re a dim-witted, loud-mouthed whirlwind of overlapping babble, fisticuffs, and banter. Rappaport leads the group as Randall, the nominally smart bandit, and each of them has a characteristic or two (Baker is the sweet one, Ross is the one that eats anything, Dixon is the peevishly ambitious one, etc.), but they function more as a crazed unit than anything else.

That speaks to Time Bandits’ biggest problem: The lack of an appreciable drive or center. Warnock as Kevin, the history-obsessed child who gets pulled along on the bandits’ run, is an empathy-focus for kid viewers, but he doesn’t have much personality. He’s the hapless milquetoast Arthur Dent of a story strongly resembling The Hitchhiker’s Guide To The Galaxy in form and tone. Randall and company aren’t particularly distinct from each other, and the eventual Good-vs.-Evil conflict that develops is mostly a halfhearted excuse for a villain design consciously taken from Alien—all Giger-esque cartilage and slime—and a big history-spanning climactic battle sequence. Former Pythoners Michael Palin and John Cleese show up for comic cameos, along with Shelley Duvall and an assortment of charming British veterans, but the film lacks the central focus and strong character arcs of Gilliam classics like Brazil or The Fisher King. The joyous escapism element is there—Kevin doesn’t volunteer for his adventure, but once away from home, he’s smitten by the excitement of history and by the chance to get away from his dullard parents, who spend their time parked on plastic-slipcovered furniture in front of the TV, kvetching about their kitchen fixtures. But the stakes for the protagonist are comparatively small, with no clear goal in sight.

Still, the individual setpieces are often giddy good fun, midway between Monty Python sketches and a longer-form story; Gilliam was still learning how to streamline here, and while some bits stand out more than others, Time Bandits feels more of a single piece than his pure Python films, Monty Python And The Holy Grail and The Meaning Of Life. Gilliam and his designers capture a range of striking isolated images: the angry floating face of God, demanding His map back; a series of giant cages dangling in darkness above an endless black abyss; a giant huge enough to stomp houses flat, and wear a mid-sized schooner as a hat. And Gilliam wraps up with one of his signature bleak, offbeat endings, one designed to cut through the film’s junkyard aesthetic and bring home the fundamental insanity of a universe built to order by rambunctious thieves at the behest of a dotty old man with no particular interest in human life. It’s sloppy and slippery, but for a $5 million movie, it’s remarkable. It also doesn’t feel like a documentary, except to the inveterately cynical. Real life may be this messy, and sometimes this tragic, and often this dirty and crazy… wait. Maybe it does have a touch of documentary to it, after all.

Criterion’s supplements this time out are few, but meaty: The commentary track, mostly featuring Gilliam and antagonist David Warner, with Cleese, Palin, and Warnock dropping in, is mostly of the nuts-and-bolts, see-what-we-did there variety, and it’s most insightful at the beginning. That interview from the Midnight Sun Film Festival is 80 minutes long and goes into much more depth about Gilliam’s life and career, with plenty of behind-the-scenes stories and insight into his work as a whole; it also features Gilliam starting the interview huddled in a massive fur coat, then doffing the thing, complaining that it feels like being inside a bear. The rest of the special features are much fluffier: a picture gallery, a 23-minute featurette about the film’s design, and an uncomfortably vapid Tomorrow TV interview where Tom Snyder interviews Duvall on such burning topics as what it’s like working with the Pythons (“really fun”) and how she feels about making kids happy.