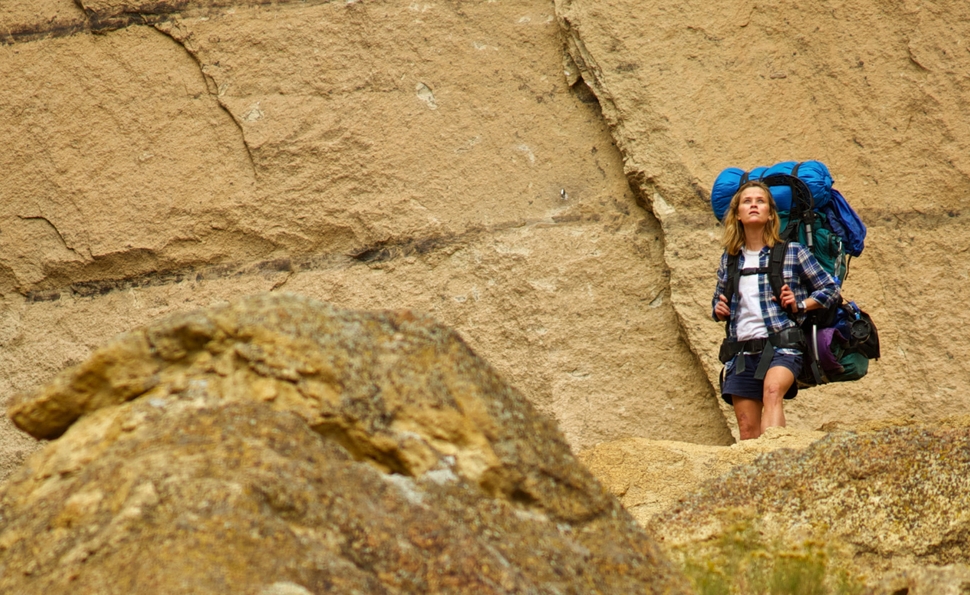 “I’d rather be a hammer than a nail,” croons Paul Simon in the Simon & Garfunkel song “El Condor Pasa (If I Could).” “Yes I would, if I only could, I surely would.” The track pops up more than once in Wild, an adaptation of Cheryl Strayed’s 2012 memoir, and it becomes a kind of mantra for a young woman who presses through hardships and bad choices, angling for a firmer grip on the handle. As played by Reese Witherspoon, whose excellence is by now a given, Cheryl is a bundle of contradictions—hapless and determined, directionless and down-to-earth, a hot mess on the road to getting her head straight. She’s such a full-bodied, multi-faceted character, in fact, that it’s a shame there has to be an accounting of each aspect of her personality. But this being an adaptation of a memoir—and what’s more, an externalization of a struggle that half resides in the author’s head—those psychological elements are spilled onto the table like the contents of Ally Sheedy’s purse in The Breakfast Club. We see it all.

Scripted by High Fidelity author Nick Hornby and directed by Jean-Marc Vallée, who also mildly arted-up last year’s Dallas Buyers Club, Wild is an episodic adventure of self-discovery in the vein of Into The Wild or Tracks, an Outback journey that was released earlier this year. In a sense, it’s like the inverse of the latter: Tracks follows a lonely 1,700-mile trek to the Indian Ocean; Wild follows a lonely 1,100-mile trek along the Pacific Crest trail between Mexico and Canada. Both interrupt the walk frequently by doling out flashbacks to explain why their intrepid journeywomen have embarked on such a dangerous voyage. The main difference is that unlike Mia Wasikowska in Tracks, Witherspoon’s Cheryl is woefully underprepared for the undertaking. There’s a recklessness to her endeavor that goes beyond a lust for life, an almost deliberate naiveté that spins off into spontaneous moments of danger and comedy.

Less spontaneous is the backstory, which Hornby’s script sketches in via flashbacks, voiceover, and echoes from past to present. Looming largest in Cheryl’s mind is her mother Bobbi (Laura Dern), who raised her and her little brother after fleeing their abusive father, and who died quickly after being diagnosed with lung cancer at age 45. Bobbi’s death fuels a period of self-destruction for Cheryl, wherein she abuses the shameful pleasures of heroin and rough trade, and sabotages her relationship with her decent, caring husband Paul (Thomas Sadoski) in the process. Hiking the Pacific Crest Trail is both a means of escape and rejuvenation for Cheryl, who’s totally lost her bearings. When a freelance journalist for Hobo Times requests an interview, she objects to being dubbed a “lady hobo,” but has no good counterargument.

Cheryl’s lack of preparation is a tragicomic well from which Wild repeatedly draws, from an overstuffed backpack dubbed “the monster” to the wrong cooking equipment to a pair of too-tight hiking boots that ravage her feet. But for as much trouble as the film has gracefully conveying her past and her interior life on screen, her encounters on the trail double as a bracing allegory for how single women must navigate a world that’s alight with hostility and threats. Her vulnerability as a lone traveler in extreme isolation at first feels like dramatic manipulation, a way of goosing up an innocuous encounter with a liquor-swilling (and licorice-eating) workman. But time and again, she has to assess the possibility of sexual aggression and violence in order to make her way safely down the path. Sometimes guile is her saving grace; sometimes, it’s just plain luck.

Hornby and Vallée never quite solve the daunting problem of fully explicating Cheryl’s troubles and motives without stalling the film’s momentum or making it seem like she’s daydreaming at dramatically convenient times. No doubt she’s haunted by the things that have happened to her, but Wild has her gazing at thought bubbles, which siphons some of the urgency and ardor from the journey itself. The trade-off is ultimately worth it: Cheryl is a thoroughly realized, warts-and-all character, and the flashbacks contribute to that. But like their heroine, the filmmakers do some fumbling to get to their destination.