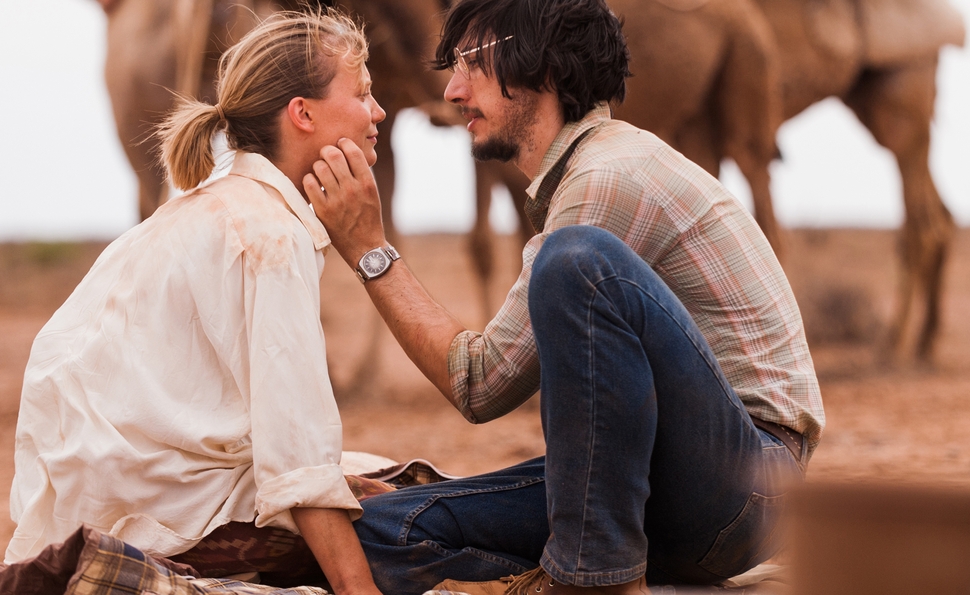 In the great films set in the Australian Outback, the desert has a savage vibrancy, somewhere on the spectrum between sensuality and terror: Think the deep orange of Ted Kotcheff’s Wake In Fright, where kangaroos hop into bloody melée, or Nicolas Roeg’s Walkabout, where a girl comes of age on the dusty fringes of civilization. If the desert itself doesn’t take on an impressionistic life of its own, it’s just an endless, topographically homogenous expanse, and it doesn’t matter how many sunsets the cinematographer is able to capture. John Curran’s Tracks, based on Robyn Davidson’s 1,700-mile trek to the Indian Ocean in the mid-1970s, looks handsome and at times majestic in following her months-long shuffle across the Outback. But his desert has no distinct character, and the woman he’s following isn’t giving much away, either, given her stated commitment to being left alone, even if she has to walk hundreds of miles from humanity to do it. So without the landscape or the heroine expressing themselves particularly sharply, Tracks is just a taciturn young woman wandering through the desert for months. In other words, a slog.

Doling out backstory about her childhood in agonizing drips and drabs, Curran relies on voiceover narration to give viewers a sense of Robyn’s thoughts and motives, because she gives so little away on her own. One thing Robyn (a committed Mia Wasikowska) does love is animals: Before embarking on her journey, she trains four feral camels to help haul her gear, and she brings along her trusty dog, Diggity, for companionship. She gets more companionship when Rick Smolan (Adam Driver), a National Geographic photographer, trails along to snap pictures. Though initially resistant to Rick, Robyn is won over by his persistence and buoyancy, and comes to rely on him for help—though she would never admit to needing any. The two develop a friendship that crosses over into deeper intimacy, but Robyn keeps him (and everyone) at arm’s length.

Robyn’s insistence on doing it the hard way and following her nomadic instincts makes her an admirable character, one who’s resolved to chart her own course and interact with Rick, the aborigines, and others whenever she see fit. Tracks has a feminist kick that Wasikowska brings across well in playing Robyn as determined, prickly, and fiercely iconoclastic. As a consequence, however, Curran struggles to translate her inner life into a dramatically compelling outer one, so he teases out a childhood tragedy that takes most of the film to finally come into focus. Wasikowska and Driver have fine chemistry together—neither is capable of delivering an uninteresting performance—but even that relationship only goes as far as Robyn lets it.

To the extent that Tracks is about survival under extreme conditions, the film does throw Robyn into a few trying situations, like an encounter with other feral camels that requires her to reach for her gun, or the desperate times when she loses track of her animals, or drags herself along on an empty canteen. Yet Curran, who turned difficult characters into combustible drama for his first two films, Praise and We Don’t Live Here Anymore, keeps the conflict muted without compensating with a more arresting and distinctive visual journey. Tracks could be described as picturesque, but so could a National Geographic pictorial. It needs to be something more.