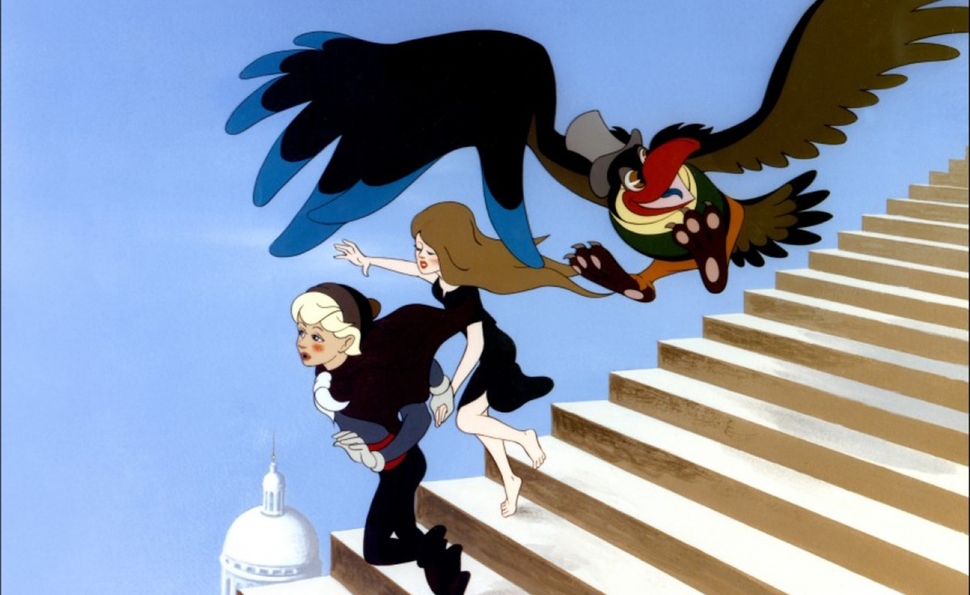 The King And The Mockingbird

There’s been plenty of cultural conversation about how Disney’s female characters all look alike, with the same exaggerated hourglass figure and giant doe eyes—so much conversation that re-imagining them in different forms—with proportionate waists, or proportionate eyes, or just as something else entirely, to make them distinctive—has become an artists’ cottage industry and a running Internet gag. For many Americans who grew up on Disney, though, they look so familiar that they’re unremarkable: American animation followed a direct evolutionary line from the early Disney and Warner Bros. cartoons, and for decades, it was so rare for any traditionally animated American film to diverge from those lines that wasp-waisted, eye-batting women just look normal to American eyes.

That’s why it’s so fascinating to see classic foreign animation like France’s The King And The Mockingbird, which is built on entirely different bones. The film has a complicated history: Director Paul Grimault and co-writer Jacques Prévert based the story loosely on Hans Christian Andersen’s “The Shepherdess And The Chimney Sweep,” another Andersen fable (like his far more famous “The Steadfast Tin Soldier”) about the deep feelings of inanimate objects. In the story, two china figurines fall in love, but are threatened by other knickknacks with foul intentions. Grimault and Prévert made their shepherdess and sweep into portraits in the gallery of a vain king; when they realize their mutual attraction, they abandon their paintings and run off together. Grimault’s film was meant to be France’s first animated feature, but he was pushed off the product over a dispute with his producers back in 1950, and a cut-down, incomplete version of his film reached French cinemas in 1953. It took him 14 years to regain the rights and the badly damaged negatives, and 12 more years to restore the film, in part by replacing 20 minutes of what he considered substandard story with 40 new minutes of footage. Seen today, The King And The Mockingbird does seem disjointed, but not like a crippled project, so much as in the familiar manner of a sprawling, discursive French genre comic, or features like René Laloux’s Fantastic Planet.

In Grimault’s restored and completed version from 1979 (now re-restored and digitized for a slow-rolling wide American theatrical release), the spoiled king of the fictional land of Tachycardia lolls around his magnificent, nearly 300-story palace, taking displeasure in nearly everything, and expressing his displeasure by pressing buttons that dump his minions through trap doors and into the unknown. One victim is a painter who dares paint him as he is: Pot-bellied, big-nosed, and perpetually cross-eyed. The king amends the painting with nobler eyes, but the scheming portrait responds by supplanting him and mobilizing the kingdom in pursuit of another portrait: a painted shepherdess who’s run off with a painted chimney sweep, all with the help of a gaily colored, loudmouthed bird who nests on the palace roof.

There’s a good deal of surreality to The King And The Mockingbird: The king’s servants include a giant robot with an improbable mechanical orchestra in its chest, and a bevy of bat-winged policemen kept in an immense birdcage. Around half the movie is simply the portrait-king and various servants chasing the fleeing young lovers—ingénues who can easily be visualized as Disney would have drawn them, except that their small eyes and waif bodies make them distinctive—around a wild variety of settings, from a dungeon full of cartoony, Warner-esque lions and tigers to a series of towering gabled roofs. (Studio Ghibli’s Hayao Miyazaki and Isao Takahata have both cited the film as a key influence on their careers. The visual inspiration can be seen most clearly as the lovers navigate the rooftops, which look strikingly like the ones in Miyazaki’s film debut, The Castle Of Cagliostro—also about a rapacious ruler and the woman he covets and wants to control.) The story is episodic and scattershot, and more about striking images than character logic. But individual moments are memorable, especially in the stranger stretches of imagination.

Seen today, The King And The Mockingbird doesn’t have the tight pacing or propulsive narrative of modern animated stories, or the consistency of a film made to a specific house style. It’s recognizably the work of an idiosyncratic artist dealing in bizarre caricature, and exploring weird ideas: an elevator consisting of a spaceship-like capsule on a pole that rises up through infinite bleached towers and minarets; a factory cranking out endless likenesses of the King; a hapless cop being chased around the King’s throne room by a particularly vindictive and mobile trap door. But its visual design and movement are striking, and its story beats are intriguingly unpredictable. It’s no surprise that it inspired a generation of animators to follow their own muses, confident that their own strange visions could find homes on the big screen. In a field often dominated by studios that perpetrate a specific animated lineage for generation after generation, The King And The Mockingbird feels unique and daring, as specific and bold in character as the gaudy top-hatted bird of the film’s title.

GoWatchIt: Buy. Rent. Stream The King And The Mockingbird