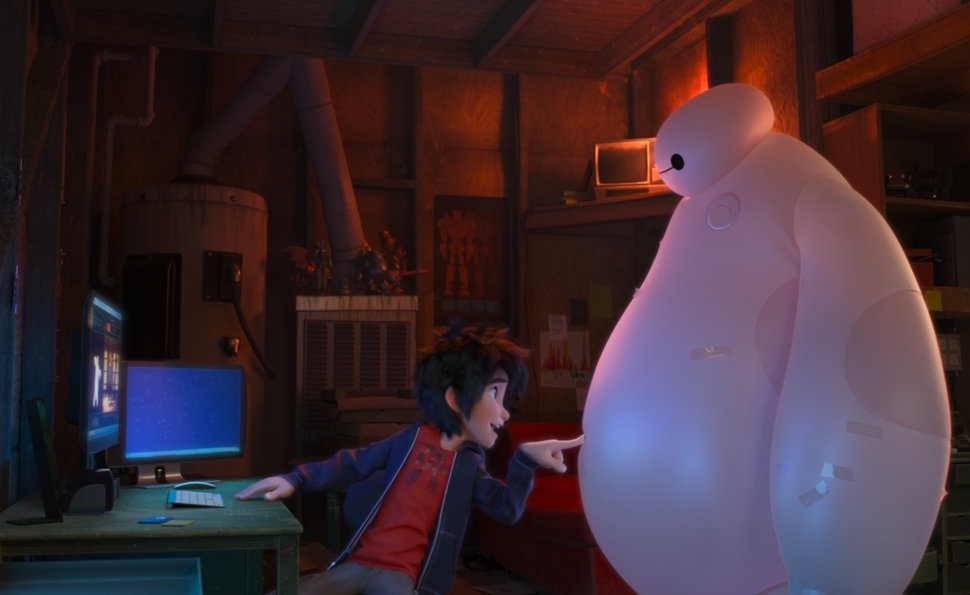 Given the Marvel Cinematic Universe’s dominance at the box office over the last six years or so, it seems counterintuitive for Disney’s Big Hero 6 to so thoroughly play down its relationship to the biggest thing in movies. Granted, Big Hero 6’s Marvel connection is about as tenuous as it gets. The eponymous team of Japanese superheroes appeared in just two minor comic-book miniseries for the company—Big Hero 6 co-director Don Hall claims Marvel didn’t even remember it owned the property—but other than some character names and a pronounced Asian influence, the film has almost no link to the comics that birthed it. (Save for a clever post-credits sequence that’s definitely worth sticking around for.) And that turns out to be Big Hero 6’s biggest strength: With little to no obligation to an established fan base or creative lineage, Hall and co-director Chris Williams, aided by a team of writers, were free to create something that’s in step with current superhero-movie trends while also feeling unique and separate. Big Hero 6 follows all the familiar team-up beats to the letter, but filtered through the squishy colorfulness of Disney Animated Features’ recent output, particularly 2012’s Wreck-It Ralph. It ultimately amounts to a feature-length origin story, but with characters this unknown and execution this fun, that’s an asset, not a liability.

That story centers on Hiro Hamada (voiced by Ryan Potter), a 14-year-old science prodigy who uses his prodigious talents to hustle in the underground robot-fighting circuit of San Fransokyo, the film’s wonderfully realized near-future setting. Precocious and brilliant, Hiro shows little interest in applying his abilities beyond that lucrative setting, until the pointed machinations of his unfailingly supportive, obviously doomed brother Tadashi (Daniel Henney) introduce him to the science-lab playground of the San Fransokyo Institute of Technology, headed up by robotics expert Professor Callaghan (James Cromwell). There, he meets a colorful cast of characters with highly specialized interests and alter-ego-ready nicknames that might just translate well to crime-fighting, should a twist of fate happen to lead them in that direction: GoGo Tomago (Jamie Chung), a speed-obsessed daredevil working on magnetic-levitation tech; Wasabi (Damon Wayans Jr.), a precision-minded audience surrogate who’s developing plasma-blade weaponry; Honey Lemon (Genesis Rodriguez), a sweet, girly chemistry student who can seemingly bend matter to her will; and Fred (TJ Miller), a laid-back comic-book fan who just sort of hangs around the lab and dreams of being a superhero one day, preferably in the form of a giant kaiju monster.

But the most important encounter Hiro has at the lab is with Baymax (Scott Adsit), a balloon-like helper robot Tadashi has developed in hopes of revolutionizing the health-care industry. (Sample bedside manner: “You have sustained no injuries. However, your hormone and neurotransmitter levels indicate that you are experiencing mood swings, common in adolescence. Diagnosis: puberty.”) When tragedy strikes—and Big Hero 6’s biggest flaw is that it telegraphs that tragedy much too loudly, undermining its effect—Baymax serves as the catalyst that drives Hiro to get his Lil’ Tony Stark on and pursue the hero game. Though he’s initially driven by that most problematic of superhero motivations, revenge, Hiro’s relationship with his brother’s creation gradually turns the sullen teenager’s quest into one of self-discovery rather than vengeance.

In addition to challenging Guardians Of The Galaxy’s Groot for the title of 2014’s Most Lovable Sidekick, Baymax serves as Big Hero 6’s main source of warmth, comic relief, and presumably merchandising. But the movie is far from lacking in the former two outside of the Baymax-Hiro relationship. In addition to Adsit’s brilliant work as Baymax, the cast is stacked with top-notch voice performances of extremely likable characters. Maya Rudolph, playing Hiro’s flighty but unfailingly supportive aunt, is a delight. So are Wayans and especially Miller, who seems to be carving out quite a career as the comic relief in animated movies. Despite some heavy themes—grief, revenge, intellectual property—Big Hero 6 is wall-to-wall fun, and the camaraderie of its central team is a crucial part of that. (Though, frustratingly, even with three interesting female characters, the film can’t manage to satisfactorily pass the Bechdel test.) Helping matters is Hall and Williams’ canny grasp of big-screen action—particularly in a gawp-inducing flight sequence that calls to mind How To Train Your Dragon by way of Iron Man—as well as the detail-rich setting of San Fransokyo, which is bursting with visual easter eggs for astute viewers.

Nothing about Big Hero 6’s story or message is especially inventive—though its handling of the grieving process is nuanced for a family film—and some plot developments have holes you could fly a Baymax through. But it doesn’t much matter: The thrill of Big Hero 6 doesn’t lie in guessing what comes next, it comes from being in the moment with great characters in a cool setting full of surprising details. (And color. Lots and lots of color.) It’s a much-needed reminder that while superheroes aren’t just for kids, they still can be, without losing what makes them compelling to a larger audience.

Note: Big Hero 6 screens with a delightful new Disney short called “Feast,” directed by Patrick Osborne, the animation supervisor on the Oscar-winning 2012 short “Paperman.” Like its predecessor, “Feast” displays a willingness to color outside the lines of computer-animation convention, using an unusual planar design for its main character, an adorable Boston Terrier puppy with the appetite of several Great Danes. Osborne keeps the focus on the single-minded pup as a larger story—one that also owes a debt to “Paperman”—plays out in the background, calibrating the puppy-centric action for maximum “Awwww”s. Dog-lovers: Prepare to melt.