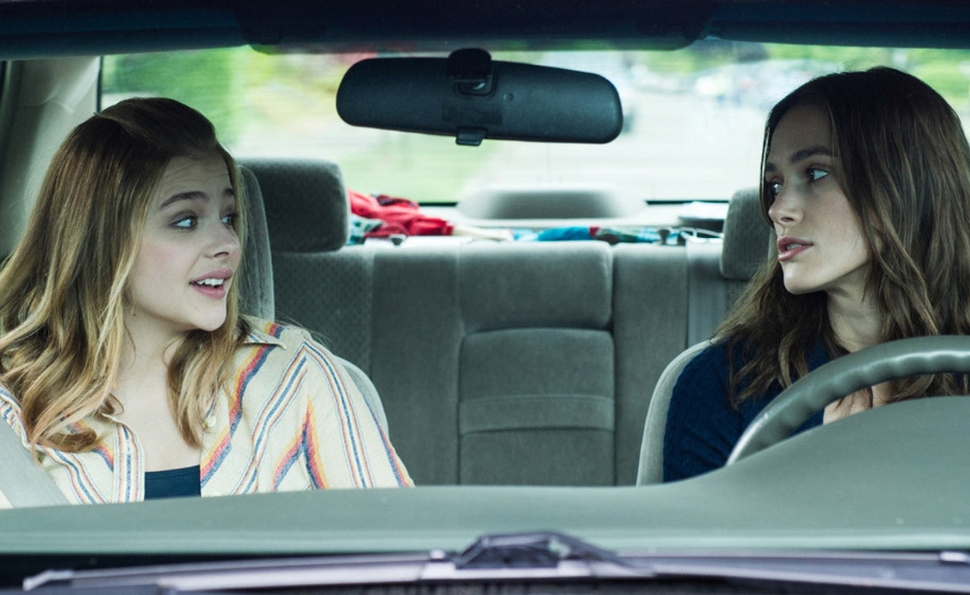 What the hell has happened to Lynn Shelton? Her 2009 film Humpday was one of the funniest comedies in recent years, so sharp in its understanding of how a happily settled married couple in their early 30s could be rattled by the arrival of an old friend seemingly living a much freer, cooler life. In the years since, though, Shelton seems to have lost any interest in the problems of real grown-ups. 2011’s Your Sister’s Sister was about three middle-aged people having difficulty deciding what to do with their lives, and in 2013’s Touchy Feely, Rosemarie DeWitt plays another middle-aged woman who responds to her boyfriend’s suggestion that they move in together by developing a physical revulsion to touching. And now in Laggies, Keira Knightley stars as a woman approaching 30 whose boyfriend proposes marriage, which panics her so much that she hides out in the bedroom of a 16-year-old she just met.

Shelton didn’t write Laggies. The script is by YA author Andrea Seigel. (Laggies marks the first time Shelton has directed a feature screenplay she didn’t write or co-write, though she’s done solid work on other people’s sitcoms, such as New Girl and The Mindy Project.) And Laggies doesn’t condone immaturity. The entire structure of the movie is built around pushing the heroine to start acting more like an adult. The primary problem with Laggies, though, is that Seigel and Shelton can’t seem to conceive of many examples of adult behavior that they don’t frame as laughably uncool.

Knightley plays Megan, who’s been working as a sign-shaker for her father’s business while she tries to figure out what kind of job she really wants. Flustered by how many of her friends are getting married and having kids—and unsure whether she wants to commit to her depressingly mature boyfriend Anthony (Mark Webber)—Megan is drawn to Annika (Chloë Grace Moretz), a high-schooler she meets outside a liquor store. Rather than going to the career-counseling seminar she promised Anthony she’d attend, Megan crashes with Annika, who seems suitably impressed by this 28-year-old who’s mastered the art of being a teenager, but not much else. But Megan eventually outstays her welcome with Annika, who resents Megan’s attempts to play mentor—and isn’t sure what to make of Megan canoodling with Annika’s divorced father, Craig.

As Craig, Sam Rockwell steals the movie. He’s as cynical as Megan, but more quick-witted and responsible—knowing he can’t afford to slack his life away when he has a daughter to raise. Craig sees through his houseguest in minutes, but lets Megan stay as long as she needs to, because he’s a compassionate sort, and because he finds her charming. Rockwell’s Craig is only in about a fourth of Laggies, but whenever he’s on the screen, challenging Megan, Laggies livens up, making her pre-midlife crisis a little more sympathetic.

Outside of Craig, though, Laggies depicts mature adults as boring, annoying drips—to a degree that would border on the parodic, if Seigel and Shelton didn’t seem to be trying to say something semi-serious and universal here, about how it feels for people to transition out of their late 20s. Laggies is an indie comedy with mainstream aspirations, so the plot veers into some sitcom-worthy contrivances, as Megan meddles in Annika’s life—sometimes at Annika’s invitation, and sometimes not. But on the whole, Laggies isn’t broad enough to have so many characters made to look silly for valuing long-term commitments over aimless self-absorption. As Laggies piles up one scene after another of Megan’s boyfriend and all her old high-school chums acting exaggeratedly square, the movie’s comic point of view becomes overpoweringly sour and predictable.

At one point, Laggies defines an ideal grown-up relationship as requiring two people “on the same side of what seems stupid,” which just about sums up the movie’s lack of generosity toward anyone who isn’t Megan, Annika, or Craig. That hipper-than-thou attitude also sets Laggies apart from Noah Baumbach and Greta Gerwig’s very similar Frances Ha, which pokes fun at the short-sightedness of the young while also finding them sweet and well-meaning. Laggies poses as a comedy of self-actualization, about a woman who just needs to take a long look at herself and discover what makes her happy. But Megan doesn’t make much of a journey over the course of this movie. She abandons the people she thought were cool in high school, in order to form another snobby clique.