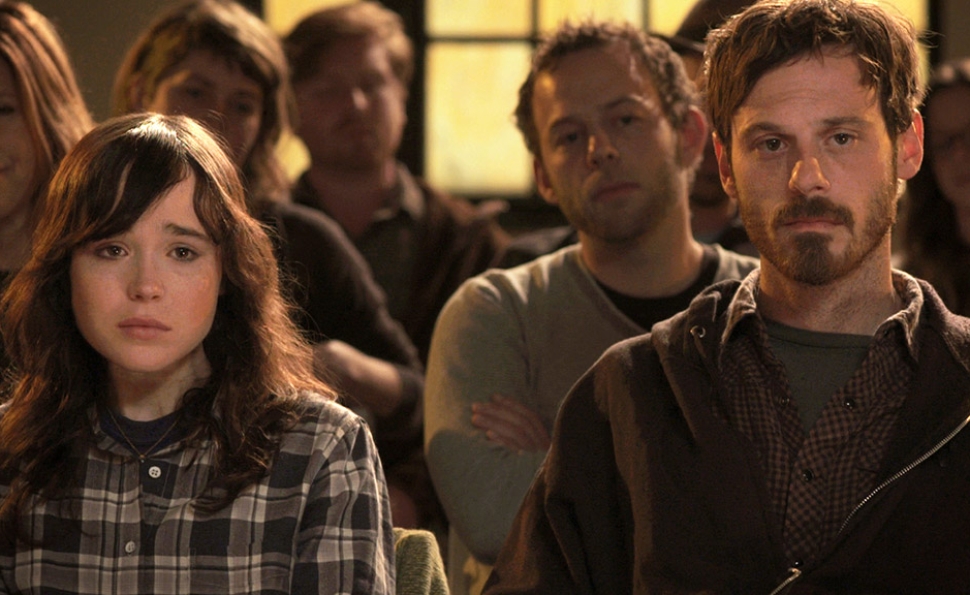 Lynn Shelton’s 2009 comedy Humpday is honest and funny about marriage and male friendship—as well as the way people in their early 30s grapple with their fading youth—but the two films Shelton has made since then have both been off the mark, one by a little, and one by a lot. The 2011 indie Your Sister’s Sister has fleeting moments of insight into how adult relationships can be complicated by matters of trust and sex, but the movie gets derailed by a belated imposition of plot. And now Shelton’s latest, the semi-supernatural dramedy Touchy Feely, suffers badly from an issue that affected both Your Sister’s Sister and Humpday: Shelton’s ideas, while frequently inspired, often spill onto the screen before they’ve been fully realized.

Rosemarie DeWitt stars in Touchy Feely as Abby, an unmarried middle-aged massage therapist who has a strange reaction when her boyfriend (Scoot McNairy) suggests that he move in with her: She develops a psychological block that leaves her overwhelmed with nausea at the thought of having to touch another human being’s skin. Around the exact same time, Abby’s brother Paul (Josh Pais)—an emotionally repressed dentist with a failing practice—inexplicably develops the power to cure temporomandibular joint dysfunction just by touching his patients. Confused, Paul seeks advice from Abby’s spiritualist friend Bronwyn (Allison Janney), and the two of them form a bond that may let Paul allow his grown daughter Jenny (Ellen Page) to go off to college and start living her own life.

That’s a lot of premise for one movie, though Touchy Feely is centered on one much simpler question: How would the lives of a brother and sister with different values be improved if they swapped personalities for a few days? If nothing else, Shelton remains an astute observer of human behavior, understanding what people express through their posture and what they don’t say. She gets the seductive, sexually frustrated undertones nested within casual banter; with the Paul character in particular, she shows how a lifetime of repeating the same “now bite, now spit” instructions in the same pleasant tone could make a man want to curl up into a ball. So when Abby and Paul’s worlds are upended, Shelton registers exactly how and why the change affects them.

Yet Touchy Feely is nowhere near as tight or sharp as a movie with such a wacky plot should be. The magical elements appear abruptly, almost as though there are key explanatory scenes missing, which leaves the characters having to retroactively explain what’s happened to Abby and Paul over and over. Then after the change, nothing especially remarkable occurs: no surprise plot twists, no crazy situations, and nothing all that funny or suspenseful. Woody Allen might’ve used this material as a launching pad for high-toned hijinks. Nicole Holofcener might’ve spun pages of quotable dialogue and achingly poignant scenes. Shelton heads in a more internal direction, hanging back and watching her protagonists quietly panic.

It’s refreshing, in a way, how uncynical Touchy Feely is. Rather than skewering New Age hokum—or buying into it, for that matter—Shelton just seems to accept it as a path toward the revelations she wants her characters to have at the end. And though it comes from a filmmaker best known for her work with actors, Touchy Feely has some strongly expressionistic sequences, including one where Abby starts visualizing skin as a grotesque fabric of pores, and another where she takes ecstasy and meets up with an ex-boyfriend (Ron Livingston) who leads her on a trip through her own sensual past.

But Shelton seems so preoccupied with making Touchy Feely feel natural and real that she’s forgotten to add any incident. Once she establishes how Abby and Paul’s changes affect them—Abby irritates her boyfriend, who’s used to her being fairly oversexed, while Paul is overwhelmed with new clients who expect more than he knows how to give—the movie mostly idles along until they’ve learned what they need to learn. In trying to find the middle ground between a person who feels very little and a person who feels too much, Touchy Feely settles into dreary neutrality.