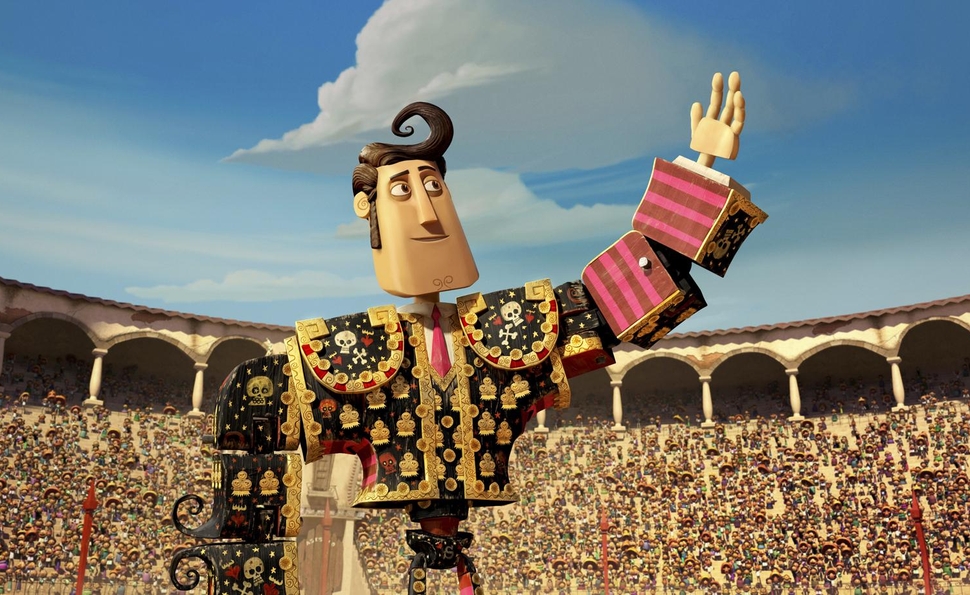 The Book Of Life is presented as a legend a cheery museum docent (Christina Applegate) is explaining to a bunch of troublemaking kids, in a frame story that doesn’t overtly add much to the story except extra style and a cute tag at the end. But accepting the film as an afternoon’s distraction for kids explains a lot about how the storyline is constructed. A mishmash of old myths, modern pop songs, manic action, and extremely broad tropes, Book Of Life feels exactly like something an inventive babysitter might come up with to while away an hour and a half. It moves fast, packs in plenty of goofy side business, and never lets self-contradiction or too much thought get in the way. It feels like the playtime story within a story that opens Toy Story 3, derivative yet inventive, and based heavily around a series of toys.

Those toys are the movie’s greatest asset. In the frame story, the docent illustrates the legend with a set of elaborate, cunningly crafted Mexican puppets representing the characters. When the film drops out of the frame and into the story, the characters are accordingly puppet-like, with exaggerated proportions, visible joins, brush-strokes, scratches, and wear. First-time feature director Jorge R. Gutierrez and his animation team follow in the footsteps of Pixar’s CGI work, giving their world a wide variety of textures and tiny flaws that enhance the reality. It looks as much like a stop-motion feature created with actual puppets as it does a computerized creation.

The story itself isn’t nearly so seamless an illusion. The docent’s legend follows three friends growing up in a tiny central Mexican town: fearless, principled, brash Maria and her two best friends, Manolo and Joaquin, who both compete for her attention. When they catch the eye of the rulers of the lands of the dead—gentle La Muerte (Kate del Castillo), who rules the Land Of The Remembered, and conniving Xibalba (an unctuous Ron Perlman), who rules the Land Of The Forgotten—Xibalba offers a wager. If Maria grows up to marry Joaquin, the two rulers will trade lands, with La Muerte banished to the colorless lower realm, and Xibalba taking over the endless fiesta above it. If Maria marries Manolo, Xibalba will stop meddling in the affairs of mortals. But naturally, since he wants to win the bet, he meddles enough to interfere with the natural course of romance.

For a story that revolves so heavily around Mexican folk art and Day Of The Dead traditions, The Book Of Life comes with a surprising amount of Greek influence. The base story comes from Orpheus and Eurydice, and the way the gods choose champions and use them as pawns in a never-ending game feels more Hellenic than Hispanic. There’s also a little Greek flavor to the relationship between La Muerte and Xibalba, who are eternal rivals, but also lovers who lavish clearly sincere endearments on each other even while one is plotting to overthrow the other. At the same time, bullfighting has a central place in the plot, as Manolo tries to live up to his heritage as the scion of a famous bullfighting family. While the adult Joaquin (voiced by Channing Tatum) becomes a famous soldier, thanks to Xibalba’s gifts of invulnerability and fearlessness, the adult Manolo (Diego Luna) becomes a talented matador—who refuses to kill bulls, and would rather practice his mariachi skills. When Maria (Zoe Saldana) returns from her childhood exile to a Spanish finishing school, she finds them both handsome, devoted, and in competition for her hand.

Gutierrez and co-writer Douglas Langdale do what they can to blunt the queasiness of a story essentially based around two men competing for a woman in a big cosmic game: Maria mercilessly mocks any hint of sexism, and she turns out to be as handy with a sword (and with kung fu) as the men. But it’s still telling that she refuses to tip her hand to either suitor, even though she clearly prefers one over the other, and she plays coy about her decision until the plot requires her to spell out what was clear to audiences even when the characters were all kids together. She causes a lot of trouble by stringing both men along needlessly, in a way that makes her less of a contest prize, and more of a different kind of unpleasant stereotype. To the film’s credit, though, it never turns either man into a villain. It’s unusual in its sheer niceness: All three members of the love triangle remain friends, capable of anger or frustration at one another, but still wishing the others well, and honestly respecting them. Plenty of adult films aren’t nearly this adult about emotion.

But the film’s elaborate paint-party design and frantic speed don’t allow much time for pondering the nuances. Manolo’s sideline as a singer means plenty of repurposed, mariachi-inflected covers of songs from Mumford & Sons’ “I Will Wait” to Radiohead’s “Creep” (still the only song in the world that movies are allowed to use to represent isolation and anomie, as it was earlier this year in Terry Gilliam’s The Zero Theorem), to the point where half the movie feels like the upbeat end-of-film dance party that caps so many animated features. His separate bullfighting and singing careers let the story pull in a wide assortment of colorful sidekicks from among the living and the dead. And another plot involving a monstrous bandit who killed young Joaquin’s father, and is after adult Joaquin’s immortality, adds some extra late-stage chaos and combat. It’s all flawed, and distracted, and conceptually messy, prioritizing color over common sense and energy over consistency. But as an afternoon’s diversion for a handful of misbehaving kids—both within the movie, and within the movie theater—it’s authentically winning.