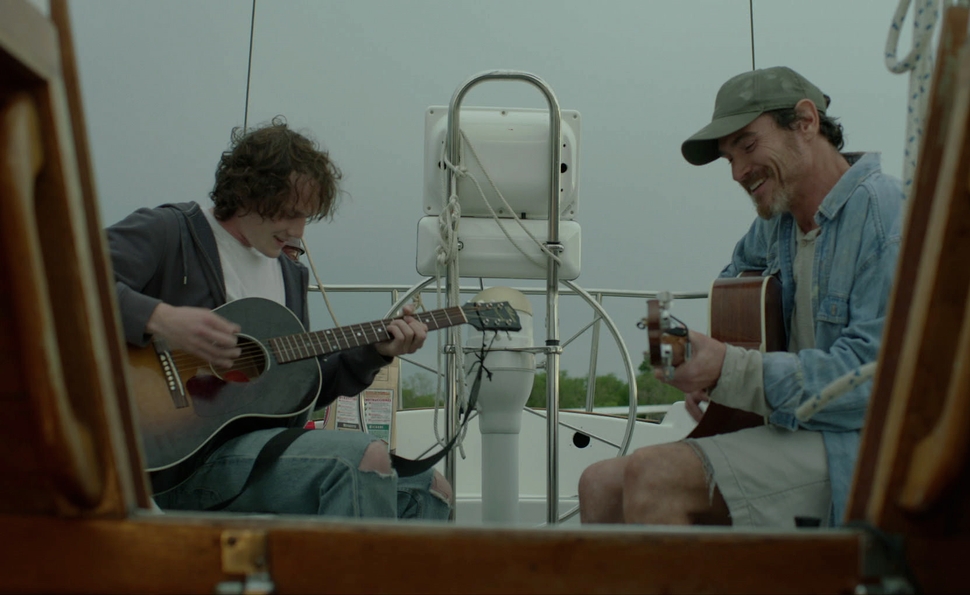 Let’s get this out of the way: Sam Manning, the adrift protagonist of William H. Macy’s directorial debut Rudderless, lives on a boat he never sails. Before that, Sam (Billy Crudup) begins his descent into boat-dwelling aimlessness by causing a scene at his high-paying advertising job that involves drunkenly kissing a co-worker before falling onto a table. That’s the level of subtlety Macy and his co-writers, Jeff Robison and Casey Twenter, are working with here. It’s a movie of big gestures and obvious metaphor, the sort of film where characters’ deepest, darkest emotions are realized and resolved through spirited performances of catchy pop songs. In other words, Rudderless is a musical.

Once viewers—and the film—get on that wavelength, Rudderless’ charms go down much smoother, but it takes some maneuvering to get to that point. At its core a film about music’s power to heal and forge connections between people, Rudderless needs an inciting incident to provide its main character with the requisite burden of grief, and Sam’s is a doozy: His son Josh (played by Parenthood’s Miles Heizer in a few brief opening scenes) is killed during a horrific university shooting. Sam promptly falls apart, drinking heavily and yelling at the paparazzi that follow him, culminating in that drunken scene at his office. Two years later, Sam has done a personal 180, ditching his fancy car and high-paying job for a lazy existence living on a boat, working as a house-painter, and generally avoiding human contact. He still enjoys a drink, though.

Then Sam’s ex-wife (Felicity Huffman) dumps some motivation into his wayward—some might call it rudderless—existence, in the form of Josh’s guitar, recordings of him performing songs he wrote, and a notebook full of lyrics. Soon Sam is fiddling with the guitar and picking out his son’s songs. Eventually, he works up the booze-assisted fortitude to play at the local open-mic night (overseen by Macy in a minor role and an unfortunate hat). Sam’s song—or rather, Josh’s song—catches the ear of Quentin (Anton Yelchin), a local musician who needs a musical partner, and inevitably, a surrogate father figure. He hounds the persistently crabby Sam, who gives in to Quentin’s puppy-dog eagerness, and faster than you can say “Cat’s in the cradle,” the two of them have formed a band (which also includes real-life musician Ben Kweller and Ryan Dean). The problem? That band doesn’t know it’s playing a dead kid’s songs. The other problem? That band is called Rudderless.

Problematic name and muse aside, though, Rudderless’ ascent to small-town musical stardom has all the easy, pleasurable trappings of a band-on-the-rise yarn, complete with barroom sing-alongs, a heady success montage, and a curmudgeonly but wise mentor in the form of Del, a music-store owner played by Laurence Fishburne (bringing some verve to a thankless Wise Black Man role). It isn’t too difficult to predict where this story is headed—particularly with Selena Gomez, playing Josh’s old girlfriend, stomping onto the scene every now and then to admonish Sam for plagiarizing his dead son—but it’s easy to get swept up in Rudderless’ heady ascent while waiting for the inevitable fall (and a characteristically unsubtle late-film twist; more in The Reveal). The film’s original songs, written by Simon Steadman and Charlton Pettus, are responsible for a large part of that appeal, occupying the same pleasant-but-propulsive indie-folk-rock realm as bands like Mumford & Sons and Of Monsters And Men.

But while the songs help, it’s ultimately Crudup who has to shoulder the film’s emotional burden, and he acquits himself well enough, especially when he has a guitar in his hand, and especially when he’s playing against the guileless Yelchin. But he is working with a script that requires him to at one point fall to his knees while sobbing, which tends to undermine the otherwise subtle work he does portraying a man working through his grief via ethically dubious means. Ironically, Rudderless’ biggest flaw is that it’s overly committed to its trajectory, creating obvious cause-and-effect scenarios rather than letting its characters simply live and act within the situation the story places them in. Too often, the film states its intentions forcefully rather than trusting in its performances and songs—and viewers—to connect the emotional dots. But when it does manage to settle in and live in the moment, it sings.