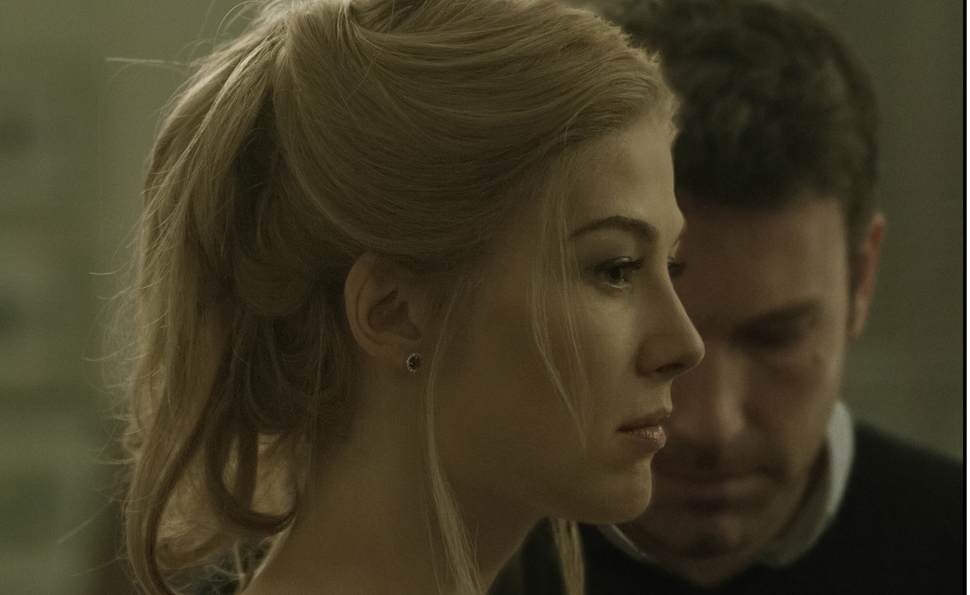 Since 1999’s Fight Club, David Fincher has proven himself a canny adapter of successful authors, from Chuck Palahniuk to Robert Graysmith to F. Scott Fitzgerald. But Gone Girl marks the first time he’s directed a screenplay credited exclusively to the same person who wrote the source material—and, not incidentally, the first time he’s adapted material written by a woman. The fact that said woman, Gillian Flynn, is responsible for one of the most talked-about bestsellers in recent memory certainly explains her prominent billing alongside one of the most respected male filmmakers of the modern era in the discussion leading up to the film, and Gone Girl reveals itself as an optimal meeting of the minds, a perfect amalgam of a writer and a director with complementary fixations.

Fincher and Flynn each have a predilection for dark mysteries, but more to the point, they have a shared fascination with the psychology of dark mysteries. Like Zodiac or Girl With The Dragon Tattoo (or Flynn’s earlier novels, Dark Places and Sharp Objects), Gone Girl’s central mystery isn’t simply one of evidence and alibis, but rather one of impulse. Mysteries aren’t based in clues and facts, they’re based in motivation, and unpacking a character’s hidden motivations—through gestures, looks, and tics—is where Fincher excels as a notoriously meticulous filmmaker, and Flynn as a shrewdly withholding storyteller.

In some respects, Gone Girl works as a companion piece to 2011’s Dragon Tattoo for the way it explores how being, or even just feeling, like a victim can motivate someone to do terrible things—to in turn become a victimizer. Unambiguous innocents are tough to come by in the best of circumstances, and when violent crime and psychological injury are added to the mix, they become all but extinct. That said, Nick Dunne (Ben Affleck) and Amy Dunne (Rosamund Pike), Gone Girl’s central victimization vortex, represent an even tougher hurdle for viewers disinclined to watch repellent characters. At its most basic level, Gone Girl represents a two-and-a-half-hour volley of he-said-she-said, but the blame doesn’t easily tip to one side of the scale; it seeps into every crack and crevice in the story, until both sides are stained by the dark desires of humanity at its ugliest and most primal.

The film opens deep into Nick and Amy’s troubled marriage, on their five-year anniversary—the same day Amy goes missing, following an apparent home invasion. Nick initially appears innocent, as he cooperates with the police investigation, headed up by the persistent, capable Detective Rhonda Boney (a beautifully understated Kim Dickens). Amy, meanwhile, contributes persistent voiceover that flashes back through the major benchmarks in their relationship—first meeting, first kiss, first anniversary, first rumblings of discord—via entries in her diary, a device that comes perilously close to tipping the film’s hand. But as the past begins to intersect with the present, Nick’s innocence becomes less of a matter of fact, and his guilt becomes more a matter of perception.

One smart addition Flynn and Fincher make to the original novel is the beefing-up of the media element, driving home how the public’s perception of a story can influence how it unfolds. (A Nancy Grace-like figure played by Missi Pyle emphasizes this forcefully, to the point of inelegance.) The media circus that invades tiny North Carthage, Missouri, to train its incessantly flashing cameras on Nick and his twin sister, Margo (Carrie Coon), is omnipresent almost from the moment Amy goes missing, taking on the aura of a malevolent force that corners Nick until he can’t help but err under their watchful gaze. And err he does—or perhaps err he already has—but by that point, it becomes apparent that this isn’t a simple matter of whodunit.

Flynn proves a canny adapter of her own work, as Gone Girl is relatively fleet for a movie of its runtime, and smartly excises superfluous local color and characters from the book. (Nick’s senile, hateful father is thankfully relegated to one brief scene.) But perhaps the best choice Flynn makes is to include an abbreviated version of her novel’s most important, telling monologue at a pivotal moment, with one character musing on the myth of “The Cool Girl,” the idealized woman who is “pretending to be the woman a man wants them to be.” The onus of societal and romantic expectations, for both sexes, is key to understanding—though certainly not justifying—the heinous acts committed in Gone Girl. Flynn’s story takes the idea of managing perception to an outsized extreme, a mentality that pairs well with Fincher’s hyper-precise filmmaking style.

That precision plays out, among other factors, in the return of some previous Fincher collaborators, notably cinematographer Jeff Cronenweth and composers Trent Reznor and Atticus Ross, all of whom have been helping steer the look and sound of Fincher’s films since The Social Network, and all of whom do characteristically effective but unflashy work in Gone Girl. Cronenworth’s cinematography, in particular, takes a muted, fragmented approach that complements the tabloid nature of the story, while exposing depth in unexpected places, like the perfectly appointed Dunne residence, which all but echoes in its vast, shadowy emptiness. Fincher’s flair for choosing collaborators also extends to his casting: Affleck and Pike are perfect embodiments of their characters, two physically beautiful but emotionally distant creatures who are equally believable as victim and victimizer. And the presence of Tyler Perry as Nick’s lawyer, Tanner Bolt, adds an interesting wrinkle and some welcome levity to the proceedings. But Pike in particular finds incredible nuance within a tricky role. (See The Reveal for more.)

In fact, Gone Girl is a tricky film all the way through, one that’s certain to spark wildly different reactions. A story with so much blame to spread around doesn’t make for easy catharsis, and Gone Girl is designed to leave viewers feeling ill at ease, bordering on fatalism: The book’s famously divisive ending, which was originally rumored to have been changed drastically for the film, remains intact, as does the story’s bitter aftertaste. But it’s impossible not to get caught up in the timepiece precision of Flynn’s story, so astutely realized by Fincher that even book-readers who know what’s coming will feel the rug being tugged out from under them all over again. It’s a wild ride, made no less thrilling by the knowledge that it ends in a horrific crash, from which no one walks away unscathed.