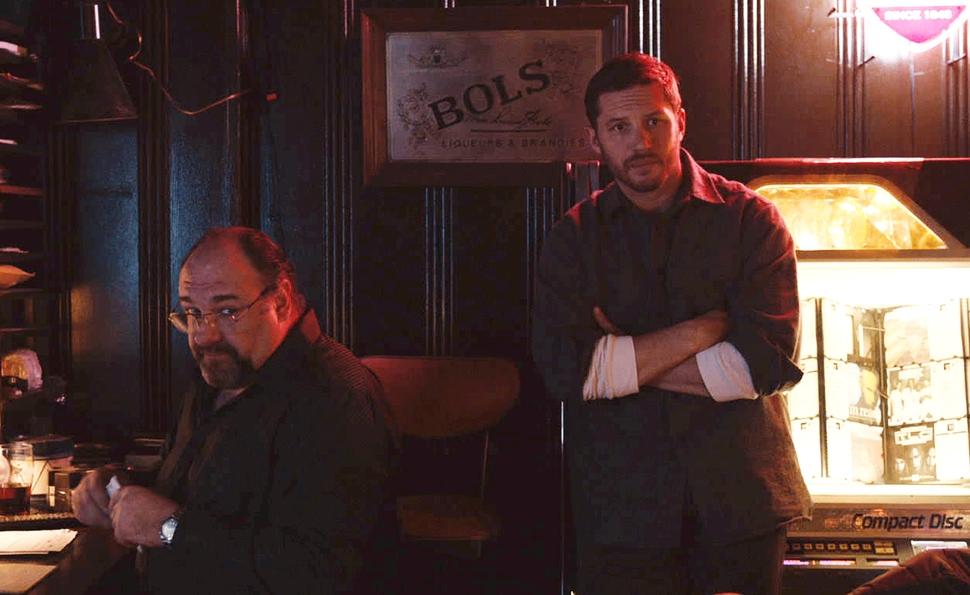 Dennis Lehane’s short story “Animal Rescue” is a strange but appealing mixture of brute efficiency and literary flourish. It’s a simple boy-meets-girl yarn set in Lehane’s favorite environs: the grubby working-class Boston that also formed the backdrop for his novels-turned-films Mystic River and Gone Baby Gone. The story is short and to the point—lonely lunk rescues puppy, meets woman, bonds with both, and makes a few important choices—but Lehane’s prose is especially lovely, full of carefully crafted furbelows and poetic images. For all its tiny ornate touches, though, it’s still sleek and swift, operating with an A-to-B-to-C economy. The film version, in virtually all respects, is the exact opposite.

The Drop is enjoyable enough in its low-key, cloistered way, but it’s strange how closely it adapts “Animal Rescue” while wasting energy on additional details that go nowhere. Lehane scripted the adaptation himself; while his producers pushed him to move the action to Brooklyn, it’s still recognizably his work, steeped in the glum, head-down, get-the-work-done attitudes that so often mark his characters. Tom Hardy (Locke, The Dark Knight Rises) stars as Bob, who tends bar at a divey neighborhood watering hole called Cousin Marv’s. The man whose name is on the sign actually is his cousin Marv (James Gandolfini, in his final completed role), but Marv doesn’t own the place anymore: He was muscled out close to a decade ago by a mobbed-up Chechen gang whose local boss now treats Bob and Marv as something halfway between slaves and entertaining pets. Cousin Marv’s sometimes acts as a “drop bar,” a dropoff and pickup point for mob money, which leads a couple of neighborhood mooks to rob it on a non-drop night, as a test run for a possible bigger haul down the line. That leaves Marv and Bob $5,000 in the hole, with the gangsters breathing down their necks for the cash.

Meanwhile, Bob finds a bleeding, traumatized pit-bull pup in a neighborhood trash can and takes it in, with some help from the trash can’s cautious owner, Nadia (Noomi Rapace). Bob and Nadia are both introverts who seem like loners more from long habit and well-earned global mistrust than by choice, but as they feint at friendship, the dog’s abusive owner turns up to complicate things.

The Drop feels more than a little like a darker remake of Mad Dog And Glory, with the bar owner/gangster separated into two characters, the menace dialed up, and the dog turned literal. (This may be the biggest starring role for a cute puppy since the last installment in the Air Buddies franchise.) Director Michaël R. Roskam, following up his blunt, Oscar-nominated 2011 debut Bullhead, gives The Drop the same quiet, close-to-the-chest vibe Mad Dog has, with the same sense of anger in one corner, desperation in another, and sheer crazy in a third, all ready to come out swinging at any moment. The entire film vibrates with understated tension, but almost never raises its voice above a hissed threat or a discomfited mutter. For a film with so many life-or-death choices on the line, it’s almost perversely passive.

The material lends itself to that kind of restraint, but the even keel becomes a problem as Lehane packs in side business that doesn’t contribute much to the story. Marv now lives with an adult sister and cares for a comatose father, but these details spin out into nothing except an extra bit of unnecessary motivation for a man already well-defined by his long-ago failures and the tiny spark of pride and resentment still burning inside. (Gandolfini’s performance, while more consistent with past roles than exceptional in any way, is still warmly welcome.) A cheerful detective (John Ortiz) doggedly works the robbery, pressuring Bob for details and turning up at inopportune times, but his scenes similarly come to nothing in particular. Of the added material, only Michael Aronov’s scenes as Marv’s well-connected Chechen leash-tugger add lean meat instead of loose skin to the body of the film. Aronov brings in the kind of the unpredictability that seems likely to explode at any minute.

A handful of other scenes have the same menace. Hardy is pointedly reserved, playing the entire film with a strained, forehead-wrinkling frown that looks like he’s struggling to understand a difficult concept. Rapace similarly has doom hanging over her head. And Matthias Schoenaerts—star of Roskam’s Bullhead—walks an impressive line between frightening and pathetic as the neighborhood bum with a claim on Bob’s new dog. Most of the film’s best scenes involve some combination of these three actors, who all perfectly capture their characters’ impotence and frustration as they’re driven to desperation by needs they can’t verbalize, or don’t want to risk admitting. The original story focused entirely on them, and when the film returns to them, it’s often electric. But the extra material around them—lightly integrated at best, and obviously unnecessary at worst—keeps blowing the fuses, and leaving the film floundering in the dark.