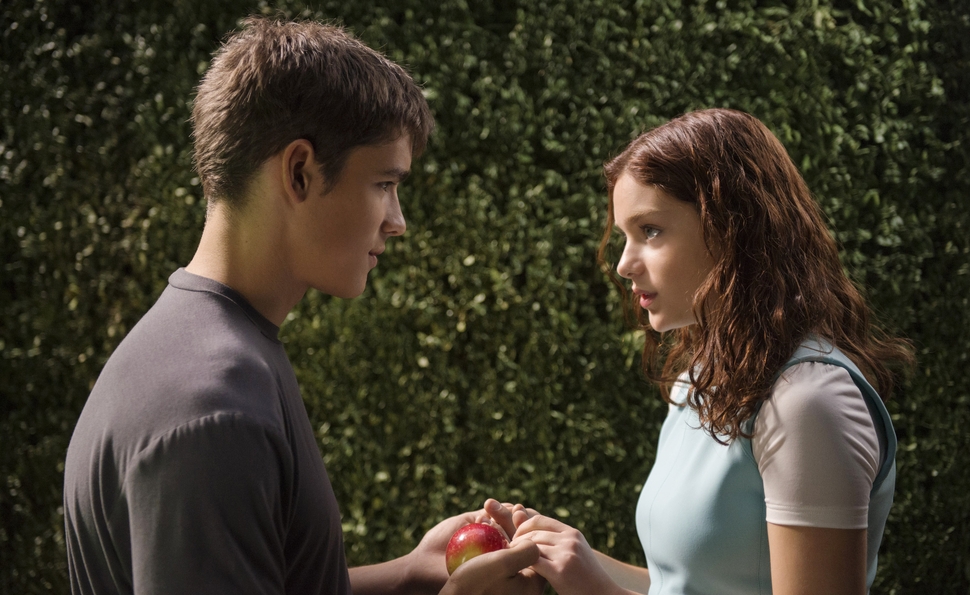 Thanks to Lois Lowry’s 1993 Newbury-winning novel The Giver, countless middle-schoolers who encountered the book via required-reading lists were introduced to the world-changing revelation that stories don’t always end happily ever after—or even end definitively. The book’s dark, unrelenting content and lady-or-the-tiger ambiguous ending make an deep impression on readers who encounter it early in life, and Lowry has created generations of hardcore fans who remember her classic reverently, and with a small sense of awe. Now, thanks to the 2014 film adaptation, the book’s legion of fans can also be introduced (or re-introduced) to the idea that Hollywood hates ambiguity. And darkness. And the kind of uniqueness that creates such passionate fans. What Hollywood movies do like is predictable uplift, marketably pat narratives, and mimicry of past successes. That isn’t what The Giver used to be about, but onscreen, that’s what it’s become.

The book centers on 11-year-old Jonas, an ordinary boy living in The Community, a seemingly utopian village of peace, plenty, and moderation, with a focus on clear, precise language and obedience to rigid social codes of Sameness and standardization. Professions are chosen for children at age 12, and Jonas is startled when he’s given one he’s never heard of. As the latest Receiver Of Memories, he’s apprenticed to an old man who begins to implant him with disturbing memories denied to the rest of his community—of war, disease, and violence. The Receivers hold onto their society’s past in case it comes in handy, and so the rest of The Community can shut out all unpleasantness and strife. But Jonas rapidly learns that their innocence comes with a terrible cost, and he runs away with an infant, to protect it from a well-meaning but unconscionable infanticide program. Their survival is left in question as the book wraps up.

The problem with the film adaptation isn’t simply that it messes with this simple plot—it’s that every single deviation from the book is meant to either push the story into the realm of familiar cliché, or to more closely and unnecessarily copycat the dystopian specifics of current YA hits like The Hunger Games and Divergent. Jonas is now a teenager (blandly impassive 25-year-old actor Brenton Thwaites, whose generic flavorlessness played to such comic effect in Maleficent). He now has a blandly innocent love interest, Fiona (Odeya Rush), whom the extensive opening narration describes as “the girl who makes everyone smile”—not exactly the accomplishment it’s billed as, in a future where everyone walks around in a chemically induced haze of genial serenity. And Jonas and Fiona have a friend, Asher (Cameron Monaghan), who looks like the third corner of a Twilight-standard love triangle on paper, but mostly serves to crank up the dramatic irony when they all proclaim they’ll be best friends forever, and to slightly goose the action when Jonas runs off.

The film version also emphasizes that Jonas was always exceptional, somehow able to see color even though he’s on the same drug regimen that leaves everyone else in The Community seeing in black and white. This twist—awkwardly inserted early on, then never mentioned again—is representative of a script that feels like bits were grafted in at random every few scenes, without anyone considering their impact on the larger story. The result is an inconsistent, confusing mass of contradictions that becomes increasingly laughable as the story goes on. By the time Jonas finds a map showing the “Border Of Memory”—apparently a magical line that will instantly restore all of history’s memories to everyone in The Community if he steps across it—the film has disintegrated into an action-driven, incoherent rush that’s forgotten its own basic setup, in spite of the effort that laborious voiceover puts in to explain it all.

Jeff Bridges at least acquits himself warmly as the Receiver Of Memory, though given that he’s been pursuing this adaptation for more than a decade (he originally wanted his father Lloyd to play the eponymous role; Lloyd died in 1998), it’s easy to wonder what he makes of what it became. If he’d successfully managed to produce The Giver in 1993, it’s safe to say it would look nothing like this version, which is heavily visually informed by a decade of placid, airless dystopian YA films like The Host and Divergent. Shot in the same sort of high-gloss, low-saturation, poreless digital wash as so many current YA films, and performed with a sort of intent but placid dopiness familiar from YA flops like Beautiful Creatures and The Mortal Instruments: City Of Ashes, The Giver fails to stand out in any of its particulars, especially once Meryl Streep appears as a duplicitous, judgmental, manipulative Chief Elder who acts more like President Snow from the Hunger Games series than like a plausible resident of Jonas’ Sameness-oriented hometown. (It’s also difficult to understand where the film’s drone-pilot program fits into The Community’s isolation policies, or where its armed secret police fit into its no-differences, no-violence philosophy.)

As the film progresses, it begins to feel more and more like a Hunger Games/Divergent story of violent totalitarian repression, which is hard to reconcile with the setup. When it eventually evolves into an action movie, it feels like a different film altogether—most specifically like Equilibrium, which similarly stole from Brave New World and 1984, but at least had its own slick, shiny aesthetic instead of a borrowed one. Mostly the problem is that every aspect of The Giver feels both painfully familiar and like an awkward, unsupportable stretch. For a film about the deep, hidden dangers of enforced sameness, that’s almost hilariously ironic.