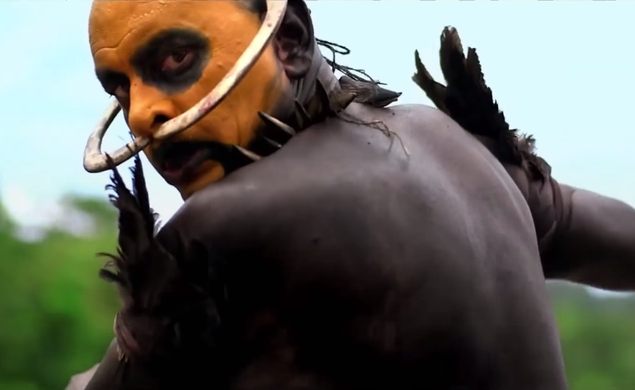 For a commercially successful filmmaker, Eli Roth has had a hell of a time getting his new film, The Green Inferno, actually seen by the viewing public. It screened at the Toronto International Film Festival way back in 2013, where our own Scott Tobias caught it and had lukewarm things to say about it, and shortly thereafter picked up both a distributor in Open Road Films as well as a planned sequel. Then it got a September 2014 release date before being abruptly pulled by Open Road following some arguments about money and advertising. Then, it got a new release date—September 25 of this year—from its new distributor, BH Tilt. And now, finally, it has received a new trailer, complete with BH Tilt emblem and everything.

The film follows a group of naïve, well-meaning, college-aged simpletons as they attempt to singlehandedly fix the problem of rainforest deforestation in the Amazon with their cell phones and their Instagram and such. Of course, they end up getting more than they bargained for, as their plane crashes en route and they are dropped into the bad part of the Amazon rainforest, where there exist people who eat people—a rude awakening, indeed. The cast is studded mostly with relative newcomers with the exception of Spy Kid Daryl Sabara and, curiously, singer-songwriter Sky Ferreira.

The use of the phrase “new trailer” is perhaps a little misleading, as, although it was only released yesterday, this new trailer is almost identical to the second of the two initial trailers released last year, except with the marks of different distributors at the beginning. No matter, though—it’s the first we’ve seen and unpacked, and it’s a relatively intriguing trailer, opening with ironically soft music over the protagonist’s idealistic espousing, and featuring fairly striking images once it gets to the cannibals part. Also, lots and lots of horrified screaming. Watch/listen below:

Vicious cannibals who are unwilling to accept your help are scary and all, but perhaps the most disconcerting part of the trailer is the depiction of native Amazonian people as, well, vicious cannibals. In his TIFF write-up, though—in which he described The Green Inferno as “feel[ing] more like a first film than Cabin Fever did”—Scott points out that that’s all more in service of Roth’s attempt at homage to 1980s Italian exploitation films like Cannibal Holocaust than anything else. Or perhaps perpetuating regressive, colonialist ideas about foreign peoples is all part of his plan to make his audience more nauseous than even cannibal gore can. If so, it’s working.