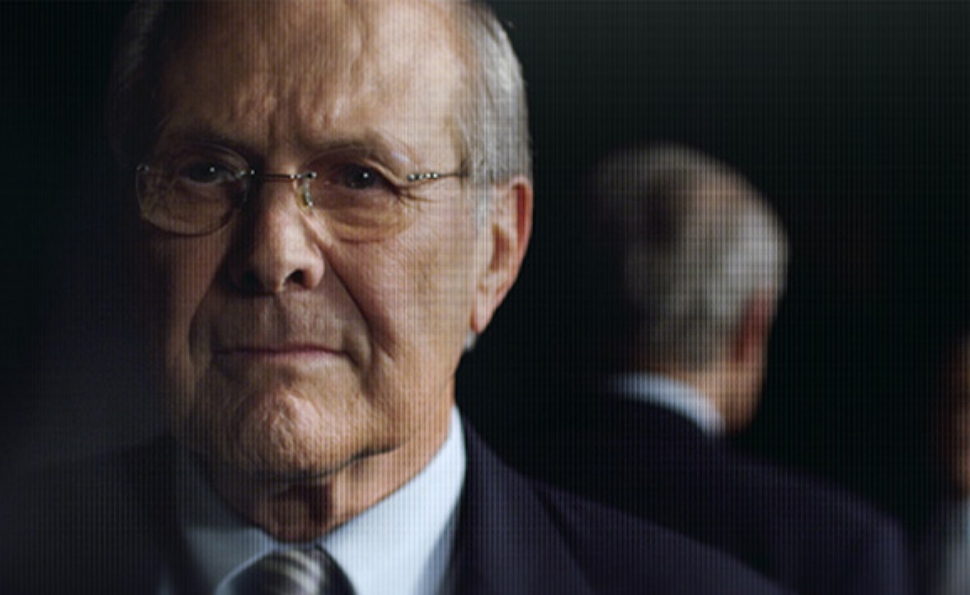 Day 4: Movies so nice, they made them twice

In yesterday’s coverage, Mike D’Angelo talked about cinephile’s credo: “Show me something I’ve never seen before.” But the pattern for me today was entirely the opposite: “Do the same thing again.” You might suspect I’m about to describe a few films that I didn’t like—failures of originality and imagination, undone by a slavish adherence to formula. But sometimes those formulas, with just a little tweaking and variation, can be revitalized. And sometimes they can be part of a deliberate strategy to get viewers to recognize the source—here The Fog Of War, When Harry Met Sally..., and Hostel—and think about the new movie in relationship with the old one.

The line on Errol Morris’ chilling documentary The Unknown Known is that it’s Morris giving Donald Rumsfeld the Robert McNamara treatment, which is exactly the case and a comparison the director no doubt welcomes. (Provided it’s not followed by “The Fog Of War is the much better film,” of course.) While both men are cagy in the extreme—a quality for which they each had much on-the-job training—McNamara is far more reflective and analytical in discussing his decisions as the architect of the Vietnam War than Rumsfeld is in talking about his role in the wars in Iraq and Afghanistan. Where McNamara confesses to mistakes in planning and execution, Rumsfeld falls back on his habit of parrying the tough questions and occasionally giving old talking points that are easily refuted, like saying Americans were not under the false impression that Saddam Hussein had connections to 9/11 and Al Qaeda. Whatever mistakes Rumsfeld concedes are bundled in rhetoric: Here’s a man whose six-year tenure as Secretary Of Defense was all about blanketing human quagmires in semantical ones.

For most documentary filmmakers, a subject like Rumsfeld would cause problems. After all, it’s tough for any journalist to build stories without useable quotes—this is why the kabuki theater of Rumsfeld press conferences, where he’d break out phrases like “the known unknown,” were viewed as politically savvy on his part. (That may be his legacy as much as his wars.) But as the title suggests, Morris turns The Unknown Known into a documentary about obfuscation, highlighting the ways Rumsfeld used specific words and phrases to cover up his inept decisions and the simple, confused, inflexible thinking that led to them. It’s much better-sounding for Rumsfeld to say the chaos that followed Iraq’s “liberation” couldn’t be anticipated than for him to admit specific errors in planning. And while Rumsfeld’s elusiveness makes a thin gruel out of the biographical elements of the film—including his almost Zelig-like ubiquity during Republican administrations from Nixon to Reagan—Morris turns the Bush years into a character study that’s revealing in how little is revealed.

For The F Word, his bright and utterly disarming follow-up to the fine hockey comedy Goon, Canadian director Michael Dowse makes his debt to Rob Reiner’s When Harry Met Sally... so plain that his characters go to see Reiner’s The Princess Bride. Though When Harry Met Sally... itself is an homage/rip-off of Annie Hall, it has become the template for the modern romantic comedy in the same way Die Hard was the template for the pre-CGI action movie. To my mind, the success rate of this rom-com formula—two attractive people who are friends for years before finally succumbing to romance—is exceptionally low, because all that delayed gratification often requires so much phony contrivance and that phoniness tends to trickle into the banter, too.

The F Word is the rare rom-com that’s both funny and romantic, and it does nothing whatsoever to buck the conventions of the countless dozens of movies like it. A low-concept premise helps: Daniel Radcliffe and Zoe Kazan hit it off at a party, but she’s committed to a long-term relationship and they agree to be friends. That’s it. The rest rides on the quality of the banter (by Elan Mastai, based on Michael Rinaldi’s play), which is adorably caffeinated and witty; the chemistry between Radcliffe and Kazan, which is strong; and Dowse’s smart direction, which sustains a bright tone (a score by the great A.C. Newman helps) and gives the city of Toronto a life that it’s almost never granted, outside of the odd Scott Pilgrim Vs. The World. Based on Goon and The F Word, Dowse seems content to turn out solid, down-the-middle crowd-pleasers—and, goodness knows, those are in awfully short supply.

Crowd-pleasing is also something Eli Roth knows how to do, and he’s been doing it at Midnight Madness in Toronto since Cabin Fever debuted in the section in 2002. Then and now, he brings a showman’s enthusiasm to the intros and Q&As, and his movies, for better or worse, supply the horror yahoos with plenty of raw meat. Roth’s new film, The Green Inferno, returns to the Hostel well, focusing on another set of young, naive Americans who get a sinister reception abroad. Roth’s Hostel films shrewdly seized on changing attitudes about America overseas, stoking real-life fears of blowback. The Green Inferno has a ball making fun of campus slacktivists who fly off to Amazonia with their iPhones in a misguided and compromised mission to stop deforestation from destroying tribal jungle. When their plane crashes, the same natives they were seeking to protect give them the Cannibal Holocaust treatment.

Filming on location in the actual rainforest, Roth is attempting a grindhouse Werner Herzog, but The Green Inferno has a cheap, slapdash quality that robs it of any beauty or lush ambience. Several films into his career, Roth hasn’t made great strides in terms of style—if anything, this feels more like a first film than Cabin Fever did—but he’s a great student of the horror genre and he knows how to make entertainment out of appalling material. Depicting South American tribespeople as bloodthirsty, virgin-sacrificing cannibals sounds as dicey now as when the Italians made Cannibal Holocaust and Cannibal Ferox, but Roth couches The Green Inferno so firmly in homage that it’s easy to laugh it off and luxuriate in the excess. More than being “edgy,” he wants to show us a bloody good time.

Also seen: Not to be confused with the late-1980s Kirk Cameron-Dudley Moore body-switching comedy, Like Father, Like Son is another elegant family drama by Hirokazu Kore-eda, whose lovely Still Walking is its closest antecedent. There’s so much complication and heartbreak in the story—about two families who find out their 6-year-old sons were swapped at the hospital—that Kore-eda doesn’t need to make so much of it about the redemptive arc of a rich, inattentive father. Tom At The Farm, from prolific Quebecois director/star Xavier Dolan (Laurence Anyways, Heartbeats), goes big with its fish-out-of-water drama about a gay urbanite (Dolan)  meeting country homophobia, but its exuberance is both strength and weakness. All Cheerleaders Die extends Lucky McKee’s yen for femme-centered shock horror, but he and co-director Chris Sivertson can’t wrangle their frenetic cross-pollination of witchcraft and zombies. Abuse Of Weakness returns Catherine Breillat to the autobiographical mode of A Very Young Girl, 36 Fillette, and Sex Is Comedy mode by detailing her mid-2000s stroke and subsequent swindle by a charismatic thief. Tedious at times, its nearly unbelievable until the very last scene, which Isabelle Huppert carries across with great credibility and emotion.

I’ll join in all the critical hosannas for 12 Years A Slave, which accomplishes the Schindler’s List-level feat of treating the gravest of subject matter with the right tone while also functioning as an expressive, impassioned, devastating work of art.  Though I’m slightly less enamored of the festival’s other much bally-hooed Hollywood movie, Gravity, I think its critics have overemphasized how much the dialogue and backstory intrudes on what’s primarily a staggering piece of spectacle. (It’s not an insult to say that the film took me back to the experience of visiting Epcot Center as a child.) Much of the formal restraint that gave Götz Spielmann’s superb Revanche such a chill is on display in his disappointing follow-up, October November, but his story of two grown sisters caring for their stroke-addled father is dramatically inert. The Strange Color Of Your Body’s Tears is another gorgeous exercise in giallo experimentation from the directors of Amer, but a little of the film’s design goes a long way. Life Of Crime brings Jennifer Aniston, John Hawke, Mos Def, Tim Robbins, and Isla Fisher together for a middle-of-the-road adaptation of Elmore Leonard’s novel The Switch, but it’s great to hear the late author’s voice in the dialogue and deft plotting. And I’m happy to report that We Are The Best!, a sweet movie about punk band of 13-year-old girls, marks Lucas Moodysson’s return to Show Me Love/Together territory after a decade in the wilderness. Welcome back!