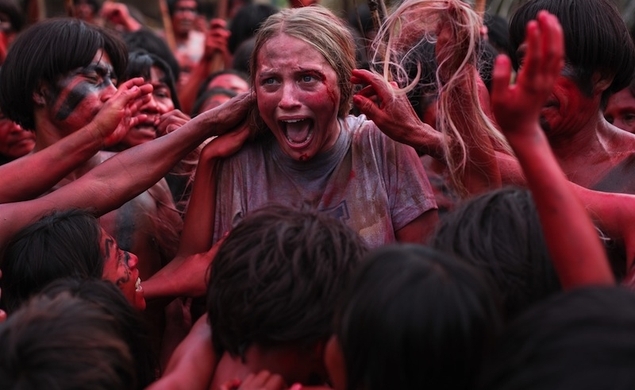 Horror fans eagerly awaiting director Eli Roth’s first feature in six years will have to pine a little longer—or perhaps a lot longer, as The Green Inferno has been pulled from the release calendar of its distributor, Open Road Films, with no clear replacement date. It’d make a great story if this grisly film about cannibals had been pulled because of its excessive gore, or threats of lawsuits, or fainting customers. Sadly, the reality is a lot more mundane. According to Deadline, the move is the result of a fight between Open Road and the film’s financier, Worldview Entertainment, over “ex-CEO Christopher Woodrow’s commitment to provide the [publicity and advertising].” Deadline has more details:

“The company, now run by Molly Conners, put a freeze on all of Woodrow’s extravagant commitments and is scrutinizing every deal that was made. Green Inferno has been caught in that snare and is not alone; there is reportedly a lawsuit by Hoyt David Morgan, who claimed he staked $3.7 million in Worldview in exchange for exec producer credit on the Alejandro Gonzalez Inarritu-directed Birdman, only to be stiffed on the money and the credit.”

Roth didn’t speak to Deadline for its piece, but he did retweet the article when it was posted, along with these comments, which confirm the delay:

BREAKING: #TheGreenInferno off the menu for Sept http://t.co/ZTR01Ui2xJ Everyone is working to solve this ASAP. Thank u for understanding!

The Green Inferno premièred last year at the Toronto Film Festival (where, let it be said, our own Scott Tobias was not a huge fan), and Roth had already announced a sequel to the film, titled Beyond The Green Inferno, coming in the future from director Nicolas Lopez. With that in mind, we’ll almost certainly see The Green Inferno at some point, in some form. How and when, though, remain unclear.