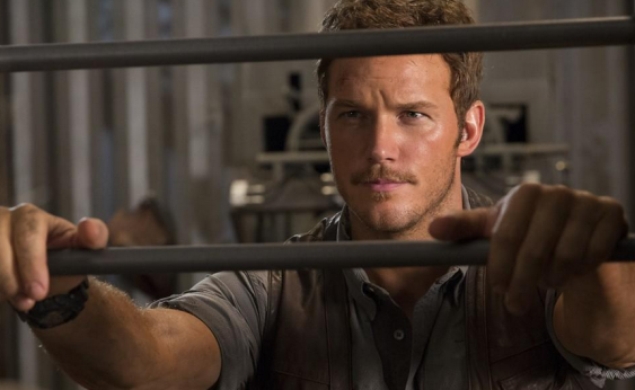 Classiest Move Of The Day: Marvel congratulated Jurassic World on dominating the box office
Jurassic World beat the Avengers’ U.S. opening-weekend record, grossing more than $200 million in its opening weekend and, as of today, boasting the biggest nonholiday Monday gross ($25.6 million) of all time in North America. Though every day is a holiday, if you look at the world right! Being the classy mofos that they are, Marvel has taken the opportunity to congratulate the film, producing an image that depicts a stonefaced Chris Pratt riding a screaming T-Rex that’s wielding Thor’s hammer. The Avengers look on, astonished by Pratt’s manliness but apparently unmoved by T-Rex’s unadulterated rage. Kevin Feige tweeted out the photo right before he went home to look upon his garage of unmarked Black Widow dolls.

I Want This Movie, I Want The World, I Want The Whole World, I Want To Lock It All Up In My Pocket Of The Day: Jennifer Lawrence and Chris Pratt’s Passengers might happen, it’s all up to Tim Rothman
Speaking of Jurassic World forever and ever until we die, apparently the film’s financial success has convinced Sony to press forward with the still-developing Chris Pratt- and Jennifer Lawrence-starring Passengers, “a love story involving two people aboard a spacecraft where the rest of the passengers are locked in suspended animation” that sounds awesome and I want it!! New Sony chief Tim Rothman was skeptical about the movie because it’s expensive and not going to spawn 10 million sequels or 18 million themed backpacks, but now he’s like “Chris Pratt is the cutest, let’s maybe do this.” As Deadline tells it, “All eyes are on Rothman here, who needs to take big swings in championing original IP and supporting big filmmakers and talent.” Don’t fuck this up, Rothman. I want Jennifer Lawrence and Chris Pratt in space and I want it RIGHT NOW (OR NEXT YEAR, THAT’S FINE).

HMMMMM Of The Day: Jason Segel may join the cast of Alfonso Gomez-Rejon’s Collateral Beauty
Jason Segel is in talks to join Hugh Jackman and Rooney Mara in Collateral Beauty, the next film from Me And Earl And The Dying Whatever Thing’s Alfonso Gomez-Rejon. As we’ve noted before, the story will follow a New York ad exec who experiences a deep personal tragedy; his colleagues get him out of his rut using “unconventional means.” It’s unclear who Segel would play, but I’m going to wager it will be a well-fleshed-out part that doesn’t involve the shameless exploitation of his death because he is a white dude.

Cutest New Outfit Of The Day: Netflix, who has has redressed herself
If you watched Netflix at all yesterday, i.e. if you are a human who was existing in the world on a Monday, you might have noticed that the site looks different, or maybe you didn’t notice at all because you were stoned, and that’s okay, too. Go look now, even if you’re still stoned, it’s fine. The streaming service’s blog explains that it’s “created a richer, more visual experience, and a website that works more like an app and less like a series of linked web pages. Information appears in-line and in context rather than on a separate page, which makes exploring the catalog faster than ever before.” Netflix has also swapped out longer summaries for a slideshow, because words are confusing, and have made it easier to find titles that share the same cast, mood, or totally made-up nonsense genre.