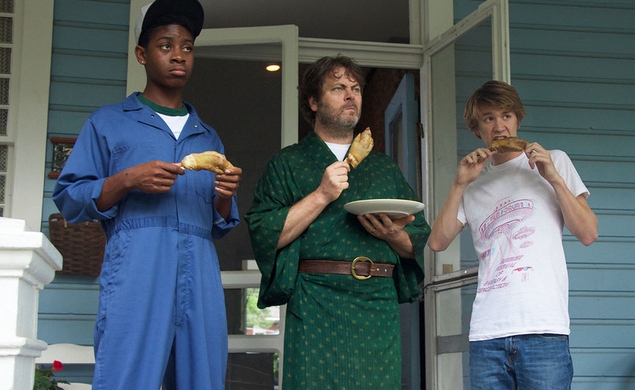 I, like Scott, despised Alfonso Gomez-Rejon’s Me And Earl And The Dying Girl. I hated it so much, in fact, that at the end of the movie, I angrily raised my middle fingers to the screen. I’ve never done that before.** The prison time was worth it. And yet, despite that reaction, the director’s next project still has me intrigued.

Today brings news that PalmStar Media and Likely Story have bought the rights to Gomez-Rejon’s next feature, Collateral Beauty. I covered this film briefly in Newsies last month, noting that it would star Hugh Jackman and Rooney Mara and would be set in a New York ad agency. Variety’s story on the film’s pickup has more details on the plot: “The story follows a New York advertising executive who experiences a deep personal tragedy. When his colleagues devise an unconventional plan to break him out of his depression, the plan works, but not in a way that anyone imagined.” The film is set to start shooting this fall.

I’m cautiously optimistic about Collateral Beauty, because I don’t fully blame Gomez-Rejon for the heightened idiocy of Me And Earl And The Dying Motivations Of Women And Black People In Movies. Apparently, Gomez-Rejon’s first feature, The Town That Dreaded Sundown, is pretty good, a self-aware “meta-sequel” to its 1970s predecessor. So despite its unsettlingly bizarre title, and the fact that it follows another beleagured white male, Collateral Beauty might just work out, as long as the “plan to break [Hugh] out of his depression” is not “introduce him to a dying girl and then encourage him to exploit her death as a personal learning experience.”

**Why did I hate it so much? Scott’s review pretty much sums it up, particularly this line: “Gomez-Rejon has erected a gleaming shrine to adolescent narcissism.” Oh, and this part: “It’s not a great sign when Earl and Rachel, the two characters who share space with Greg in the title, are notable for saying “dem titties” and for dying, respectively.” I’ll add, though, that I’ve never seen a film this consistent in its ability to sideline and misrepresent teen girls, older women, black adolescents, terminally ill people, and modern youth in general, all while possessing so much brazen, misplaced confidence in its own “genre-subverting” brilliance. To me, the movie felt like the product of the muted rage of an upper-middle-class suburban teen who’s never gotten laid and blames all women (#yesallwomen) everywhere for it, recently had his laptop taken away for watching too much RedTube, is waiting to see if he’ll ever be taken off the waitlist at UCLA, and is also maybe a future serial killer.