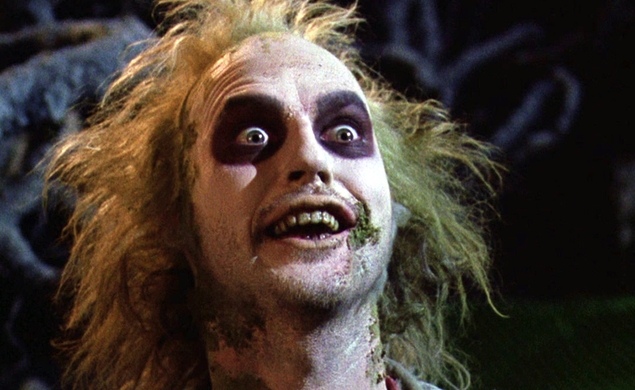 Best Non-Confirmation Of A Thing Of The Day: Winona Ryder and Beetlejuice 2

Strap in for the Newsies today, guys. (This pun will make more sense later. Or not.) We’ve got a lot of awards to hand out and nobody to hand them out to except the Internet. First up: Winona Ryder has confirmed that Beetlejuice 2 will happen. Well, her exact words were, “As far as I know, it’s gonna happen.” So, it’s happening as far as she knows, which could be very far, or not far at all. Two fun, behind-the-scenes facts about the filming of the first Beetlejuice: 1) When I was a kid, I loved that movie so much that I begged my mom to let my change my middle name (which was, and, spoiler alert, still is, Lynne) to Lydia. 2) As an adult, I bought and still wear pants inspired by Michael Keaton as Beetlejuice.

Worst Way To Wake Up Of The Day: In the middle of deep space with only one other person to talk to

Morton Tyldum is riding high these days. His first English-language film, The Imitation Game, garnered eight Oscar nominations; he’s got a lush red beard; and he is regularly rocking one earring with unprecedented confidence. Now, he’s in “early talks” to make his studio debut with Passengers, written by Doctor Strange’s Jon Spaihts. Deadline describes it as a “big science-fiction love story, set in deep space.” Here are further details, because this sounds awesome: “Passengers takes place on a spacecraft transporting thousands of people to a distant colony planet and has a malfunction in one of its sleep chambers. As a result, a single passenger is awakened 90 years before anyone else…he eventually decides to wake up a second passenger, marking the beginning of what becomes a unique love story.” A love story with a bleak, deep-space backdrop! I’m all in on Passengers, guys. Except if I were that second passenger, I’d be pissed off for a few years. There is literally nothing worse than somebody waking you up in the middle of your REM cycle to hang out with them because they’re bored and you’re both in space and the only people who will wake up for 90 years.

Strange Couple Of The Day: Brad Pitt and Angelina Jolie

Brad Pitt is reportedly “in negotiations” to play Richard Leakey in Angelina Jolie’s Africa. In negotiations = they are talking it all out over a nice dinner with their perfect children in their French villa, sipping the blood of French raccoons that keeps them young and firm. Fingers crossed that he gets the part. Jolie is reteaming with Unbroken cinematographer Roger Deakins for the film, which tells the true story of Leakey, the archaeologist who became a staunch defender of elephants against poacher in Kenya in the 1980s. Once, the Jolie-Pitt clan was photographed on a beach in Kenya.

We’re Talking About This Hemsworth Of The Day: Liam Hemsworth

In more “this thing might happen” news, “multiple individuals familiar with the project” (how familiar? Are they the project’s primary sexual partner, or do they just work in the same building as the project?) report that Liam Hemsworth has been offered the lead in the Independence Day sequel. Titled ID Forever, the movie is also the prequel to Groundhog Day, and will star Hemsworth as a conventionally attractive person who keeps waking up to the alien apocalypse, then later in life, becomes the slightly less conventionally attractive Bill Murray. Will Smith won’t be returning—he’s too busy solving concussions—but Jeff Goldblum and Bill Pullman are expected to reprise their respective roles as Andie MacDowell and Chris Elliott. (I'm confused, too.)

We were all devastated to learn that Snow White would be missing from the forthcoming The Huntsman, but eventually, we moved on, and agreed to remember Snow White not for what she didn’t do, but for what she did do; namely, act as the first female Supreme Court Justice. Fortunately, Chris Hemsworth and his strapping shoulders will be back, as will Charlize Theron as the evil queen Ravenna. But Deadline now reports that “most” of the seven dwarves will be missing from the film, too. Nick Frost, Toby Jones, and Eddie Marsan won’t be reprising their roles; in fact, The Huntsman will only feature two dwarves, their identifies currently unclear. Snow White And Two Of The Original Dwarves just doesn’t have the same ring to it, but again, we must move on.

Most Lives Of The Day: Kevin Spacey, who has nine

Kevin Spacey has signed on to star in Barry Sonnenfeld’s “high-concept comedy” Nine Lives. Sonnenfeld describes the movie as “funny, emotional, and commercial” (the trifecta foretold in the stars!); in it, Spacey will star as a “workaholic businessman who suffers a terrible accident that leaves him trapped in the body of the family cat.” This movie is actually a true story, and the genesis of the phrase, “All work and no play makes dad the family cat.”

Who Run The World? Of The Day: Penelope Cruz, Diane Kruger, and Isabel Coixet

Penelope Cruz and Diane Kruger, the most beautiful women on earth (don’t argue with me or you will be struck down in your prime by invincible cat Kevin Spacey), will star in the forthcoming This Man, This Woman, directed by Nobody Wants The Night’s Isabel Coixet. The movie, written by Eyes Wide Shut scribe Frederic Raphael, follows a man and a woman who “encounter each other by chance on a plane, and relive memories of their turbulent romantic relationship.” Kruger will reportedly play Kirsty Sachs, a talk-show host who breaks up the relationship between Cruz and whoever the leading dude will be (probably a Hemsworth). I love the “turbulent” pun a lot. I hope the entire movie is written in plane puns. “Are you ready for take-off?” “I just wish we didn’t have all this baggage.” “I’ve just got to get my head out of the clouds.” “My heart’s shifted during the flight.” “Do I need to declare ‘love’ on this customs form?” “Are you out of Xanax because I am freaking the fuck out.”

Matthew McConaughey has been tapped to star in Born To Run, an adaptation of Christopher McDougall’s best-selling book, Born To Run: A Hidden Tribe, Super Athletes, And The Greatest Race The World Has Never Seen. This is the book that ignited the pseudo-hippie “barefoot running movement” of the aughts—yes, we can point the finger at this book for birthing Vibrams—which makes perfect sense for McConaughey, who definitely runs barefoot, stoned, and naked by the light of Jupiter's moons.