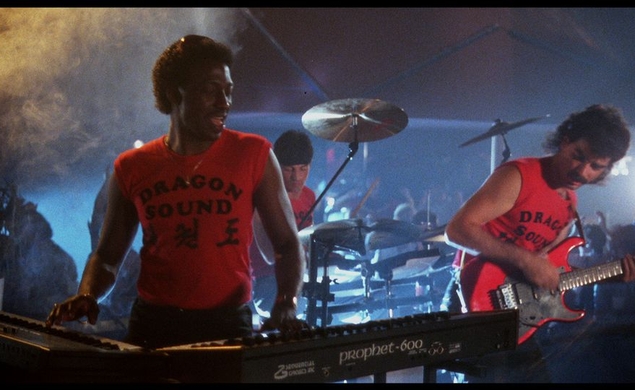 On top of its many wondrous endeavors—running a great theater chain where one can expect food, beer, and quiet; hosting Fantastic Fest, creating original posters under the Mondo label, releasing fine movies like The Act Of Killing and Spring—Drafthouse has been reviving an array of retro oddities like Roar, The Visitor, and Abel Ferrara’s Ms. 45 for midnight showings and home video. Drafthouse Films first tapped into this well with the inspired re-release of 1987’s Miami Connection, a cult-ready item that has the irresistible triple-threat of ’80s style, staggering ineptitude, and a sweet naïveté that makes it impossible not to feel some genuine affection for it. Finally putting the “classic” in Turner Classic Movies this weekend, Miami Connection puts enormous faith in the power of tae kwon do to bring peace to the savage streets of Orlando, which is controlled by drug-dealing ninjas on motorcycles. (It’s just one of the film’s many awkwardnesses that the setting directly defies the title.) Director-star Y.K. Kim stars as the frontman for a synth-rock combo called Dragon Sound, which is not only responsible for club favorites like “Against The Ninja” and “Friends,” but also stocked with tae kwon do masters. The Dragon Sound members square off against the rival gang for control of the city, via a series of fight sequences that fall hilariously short of the ’80s cheap-o action-movie standard. But Kim’s auteur touch gives Miami Connection a bizarre distinction, one that late-night partiers and insomniacs will find immensely appealing if they tune into TCM at 2:15 a.m. Eastern on Saturday.