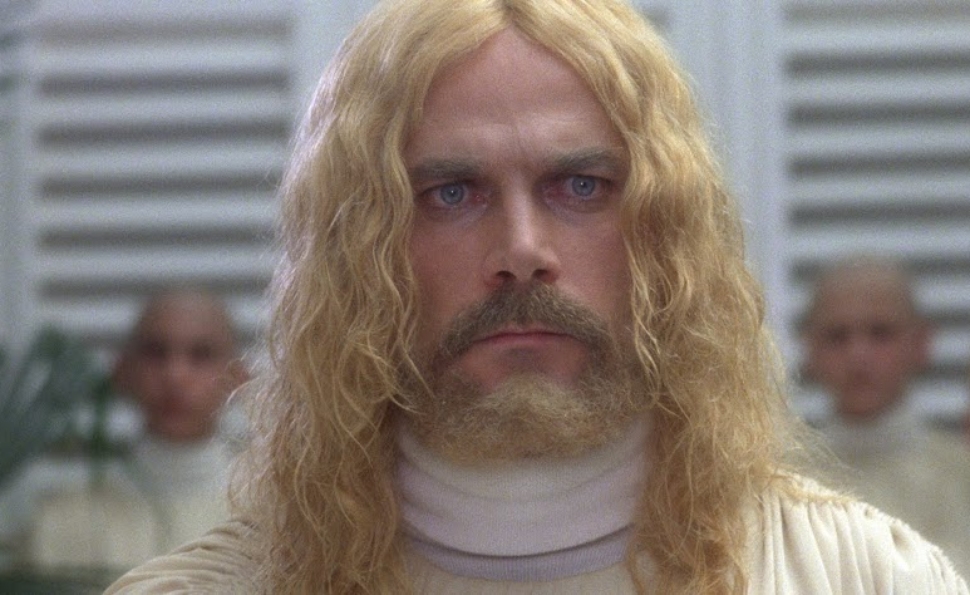 “I really hope that you all have seat belts, because you’re going to need them to watch this movie—so you don’t run,” Lance Henriksen warns in an interview for the DVD/BD release of 1979’s batshit The Visitor. The original poster says it all, really: A giant eyeball with lightning bolts shooting out from it, gnarled green fingers with sharp claws holding a bloody length of piano wire, the flat sprawl of a Los Angeles-like cityscape below, a tagline that reads “They know we are here…”—none of which has anything whatsoever to do with the movie. Produced in Rome and Atlanta, with American screenwriters, an Italian director, and as eclectic a cast as has ever appeared in an tacky exploitation movie, The Visitor is like a puzzle jammed together by a 3-year-old, with the polyglot pieces forced into place whether they fit or not. In other words, it’s an essential curiosity.

Italian knockoffs of international genre hits were a cottage industry in 1970s, but they were usually more specific than The Visitor, which tosses in elements from The Birds, Rosemary’s Baby, Close Encounters Of The Third Kind, and Damien: Omen II, the one where Damien’s evil is part of a larger mystical agenda. With all these influences at play, director Michael J. Paradise—an Ellis Island-fication of his real name, Giulio Paradisi—feels sufficiently liberated from logic to take the film wherever he likes, from the bizarre hallucinatory realm where Good and Evil marshal their forces to a domestic melodrama featuring the wailings of Shelley Winters. In some stretches, the madness ebbs into the dully pedestrian—Drafthouse’s 109-minute cut is the longest, and perhaps most accommodating of the slack pacing—but there’s always something weird waiting around the corner.

Best not to get hung up on the incoherent exposition that opens the film, which basically accounts for some evil universal force named Sateen that has manifested on Earth. (Franco Nero shows up briefly as Jesus Christ for whatever reason.) A blonde, pigtailed mischief-maker named Katy (Paige Conner) is the mortal manifestation of that evil, and her poor, hapless mother Barbara (Joanne Nail) is the only woman on the planet with the genetic makeup to host such a beast. Katy encourages her mother to give her a baby brother, and Barbara’s boyfriend Raymond (Lance Henriksen), a hotshot executive with ties to the inter-spacial conspiracy, works to break down her resistance. Meanwhile, a gentle, mysterious old man (John Huston), supported by a legion of bald followers in gray sweatsuits, tries to thwart their plans.

The Visitor’s disjointedness carries over to Paradise’s feeble attempts to pull off a horror sequence, but the flatness often pays off by accident, as in the scene where Katy receives a gun as a birthday present and clumsily shoots her mother in the spine, or another where she tosses a group of attackers around an ice-skating rink. (Given the displays of Katy’s otherworldly talent as both a gymnast and an ice skater, she could have been a double Olympian, if she weren’t so devoted to spreading evil throughout the galaxy.) Elsewhere, the film brings in a detective (Glenn Ford) who barely has time to investigate the weird goings-on before having his eyes pecked out in a brutal avian attack.

What does it all mean? The Visitor doesn’t come close to answering all the questions it raises, but that’s the film’s M.O.: If nothing makes sense, then nothing is off limits. Seeing such directorial luminaries as Huston and Sam Peckinpah join veteran character actors like Henriksen, Winters, Ford, and Mel Ferrer suggests a behind-the-scenes documentary to make Burden Of Dreams look quaint; the mild disappointment of The Visitor is that it couldn’t possibly be as crazy as it sounds. But as B-movie trainwrecks go, there’s endless appeal to rubberneckers here.

Two nine-minute interviews are the main attraction on the disc, but both are suitably riveting. “Visiting Lance Henriksen” finds Henriksen musing about the “hodgepodge” of ideas and a script so roughly translated from Italian to English that he and the other actors didn’t know what they were doing. He also fondly recalls Winters walking around the set with a tape recorder, wafting the music she liked “like incense.” “Writing The Visitor, with Lou Comici” is even funnier, given Comici’s access to the producer and director, who were battling for control over the movie. Comici (one of the screenwriters) says Paradise had scenes but no story in mind, which led to the inclusion of elephants (“Because people like elephants”) and a fixation with bathroom scenes (“‘People take a shit every day,’” Comici recalls the director saying, “‘We should have it in there.’”). He also recalls Paradise’s conviction that Comici was part of a conspiracy to get him fired, which came to a head when Comici delivered his final draft to Paradise, only to have the director immediately declare “I hate it!” and toss the pages out the window of his Beverly Hills office. A trailer and a cool Easter egg are also included in the package.