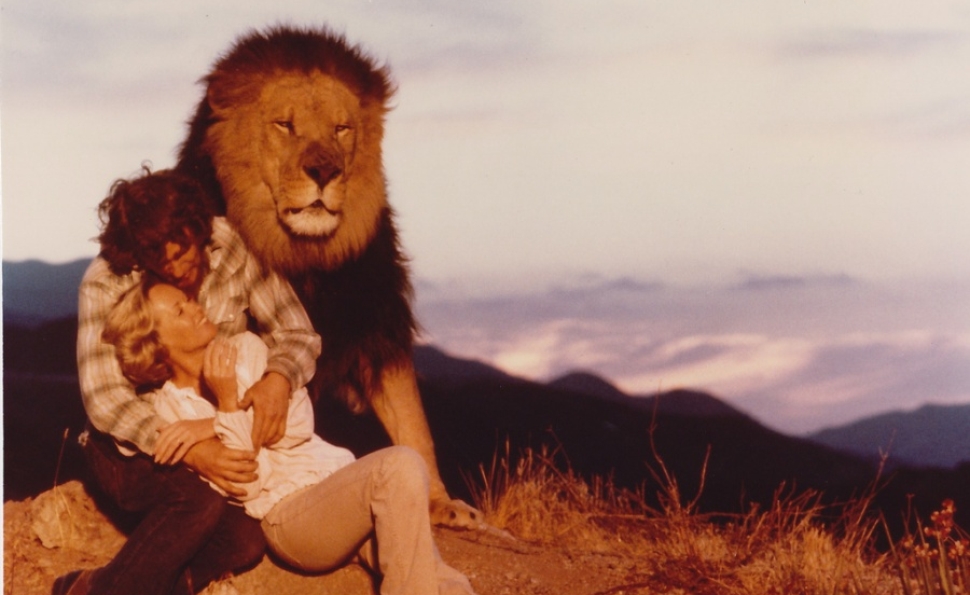 The insanity begins before the credits have ended. Roar, a 1981 film now receiving a theatrical re-release, features a title reading, “Since the choice was made to use untrained animals and since for the most part they chose to do as they wished, it’s only fair they share the writing and directing credits.” This is followed by screens featuring images of lions accompanied by credits like “Robbie as Robbie” and “Gary as Robbie’s Son Gary.” It’s preceded by another screen boasting that the American Humane Association can assure viewers that no animals were harmed while making the film.

What that doesn’t reveal is that many humans were hurt making the movie, which spent 11 years in production and resulted in 70 documented injuries, including an incident left cinematographer (and future Speed director) Jan DeBont with more than 200 stitches and a reattached scalp. For grisly photographic proof, look no further than the Drafthouse Films website, which also provides a synopsis of how the film came together.

The backstory is crucial to appreciating Roar, if appreciating is the right word. Inspired by an experience filming in Africa in the late 1960s, star Tippi Hedren and her husband Noel Marshall adopted a lion who lived in their home as a pet in the early 1970s, even occasionally sharing a bed with Hedren’s teenage daughter, Melanie Griffith, as documented in a series of beautiful/terrifying photos for Life. One thing led to another, and by 1980, the family was living on what would become the still-active Shambala Preserve with more than 100 big cats, most of them lions, but with plenty of tigers, cougars, panthers, and leopards thrown into the mix. There, Marshall—who stars in, directed, and wrote the film (with credit for additional material going to Addams Family star Ted Cassidy)—filmed the bulk of Roar, a baffling adventure movie that doubles as a document of madness.

Delivering most of his dialogue with the sort of half-panicked inflection used by Shaggy when he and Scooby-Doo are in a hurry to get back to the Mystery Machine, Marshall stars as Hank, an Africa-based preservationist or scientist—it’s never entirely clear—whose project seems to be throwing a bunch of big cats together and seeing what happens while he lives among them. As the film opens, he faces threats from an unhappy local—the member of some vaguely defined, disapproving committee—as he anticipates the first visit from his wife Madelaine (Hedren) and their kids (played by Griffith and John and Jerry Marshall, Noel Marshall’s children from a previous marriage).

One early scene establishes what’s to come. Speaking to a visitor, Marshall shrugs off some worrisome behavior by saying, “The cats got a little excited, that’s all.” Then he’s tackled by half a dozen or so of the cats in question. Nothing here is simulated. Marshall actually has to fend off the friendly (?) advances of his cats. When he hurts his hand in a later scene, nothing about it suggests the film needed stage blood to simulate the effect. (Marshall developed gangrene at one point.) Still later, Madelaine and the kids show up while Noel’s away, at which point they’re chased by the cats, fleeing from room to room as various lions, tigers, and other animals wreak havoc. This makes up the bulk of the movie, which starts to play less like a Disney-inspired nature adventure, and more like a correlative of Werner Herzog’s Grizzly Man. It’s never clear whether Roar wants to present all the frightened scampering as comical or horrifying, but the unsimulated panic in the actors’ eyes keeps pushing it toward the latter.

As it should. The film, like Hank’s vague experiment, is premised on putting a bunch of humans and cats in the same place, and hoping for the best. Even factoring out the danger and near-disasters endured by the filmmakers, the results don’t add up to much of a movie, just a lot of nicely photographed scenes of  animals creating chaos, occasionally accompanied by vague philosophizing, as when Marshall says of a lion, “The whole meaning of his life is before him.” In one sequence, an elephant destroys a boat, then a tiger arrives on the scene, then an elephant picks Hedren up, all to no discernible purpose. Yet what makes Roar awful also makes it fascinating. (Seekers of the strange should ignore the star rating and run as if chased by leopards to any theater playing it.) No doubt spurred by an honest enthusiasm for Africa’s endangered wildlife, Marshall and his family poured a lot of time and money into a film meant to have make viewers love the animals as much as they do. That didn’t work out: Few saw Roar in 1981, and those who did probably left feeling as much terror as affection. Still, it’s hard not to respect the effort. However misguided, it’s clearly one from the heart, a movie that should never have happened, and one that’s hard to believe actually exists. Roar is one of a kind. With any luck, it always will be.