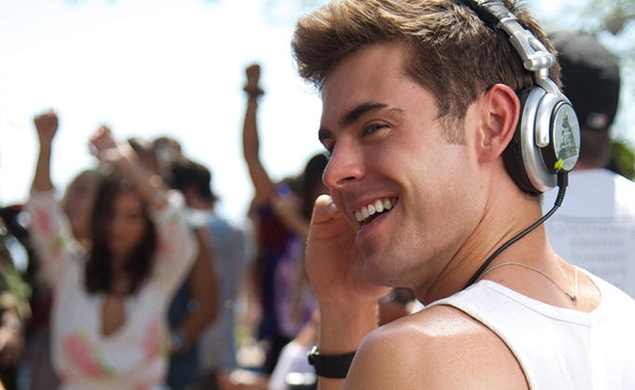 “WHAT IS THIS MOVIE RACHEL I AM SHRIEKING.” This is an email I received this morning from one Charles Bramesco, who, tragically, due to restraints of space, time, daily budgets, and his close friendship with Zac Efron, was not able to share his thoughts on the just-dropped trailer for We Are Your Friends in these pages. He did, however, prepare us well for this moment about a month ago when he broke down the movie’s premise:

“Deadline reports today that a new EDM-oriented film called We Are Your Friends will put the ‘bros’ back in Warner Bros. when it drops on August 28. The film stars Zac Efron as Cole, a down-on-his-luck DJ struggling to break into Los Angeles’ EDM scene. Cole befriends an experienced DJ named James (played by Wes Bentley, which is weird, but we’re listening), and a mentorship develops between the two. But that bond is threatened when romantic feelingsor as #millennials might call them, #feels—blossom between Cole and Sophie (Emily Ratajkowski of Gone Girl fame and “Blurred Lines” notoriety), James’ girlfriend. A love triangle soon takes shape, and as any disc jockey worth his bath salts knows, a turntable can’t spin a triangular record.”

But oh, sweet readers, We Are Your Friends is so much more. Based on the first trailer, We Are Your Friends appears to be trying to make a Big Statement On Modern Life For The Youths. It’s like some sort of bastardized, rolling-paper-thin, EDM-and-MDMA-slathered version of Fight Club-meets-Dead Poets Society-meets-Eden-meets-High School Musical. Subsequently, the first few seconds alone mark some of the more disturbing I’ve spent alive in a long, long while. I’ll say no more because words are insufficient now.

I can’t speak to director Max Joseph’s intentions here, as I am not Max Joseph and I also think Max Joseph is not Max Joseph. “Max Joseph” is the pseudonym for a tower of perpetually blazed adolescent festival-goers sitting on each other’s shoulders ad infinitum.

But I do have some questions for “Max.” Why do you hate the liberal arts so much? What’s your beef with the SATS? Every functioning society needs standards by which to measure competence in academia, “Max.” Also, is it just me, or is Zac Efron near-tears at least twice in this trailer? Was Zac Efron blackmailed into doing this movie?

Oh, and Max, why are we pulling back the layers of Emily Ratajkowski’s flesh to look at her thrumming aorta? Was “Blurred Lines” not exploitative enough for our fair Emily? Are we so inured to female nudity that we must now literally peel back a woman’s skin in order to feel something? And what in the name of Skrillex is wrong with “Drunk In Love,” my dude? How are you gonna throw shade at motherfucking Beyonce? Especially when it was either you or Shakespeare or Lars Von Trier who wrote, “If you have a dream, and it’s made of everything that’s made you—hardship, friendship, so much love—that’s your ticket to everything”?

Lastly, Max, did you write this screenplay by reading a thinkpiece on #Millenials, then cutting out the buzzwords and pasting them, ransom-note style, onto a single piece of paper? It’s okay if you did, I just want to know.